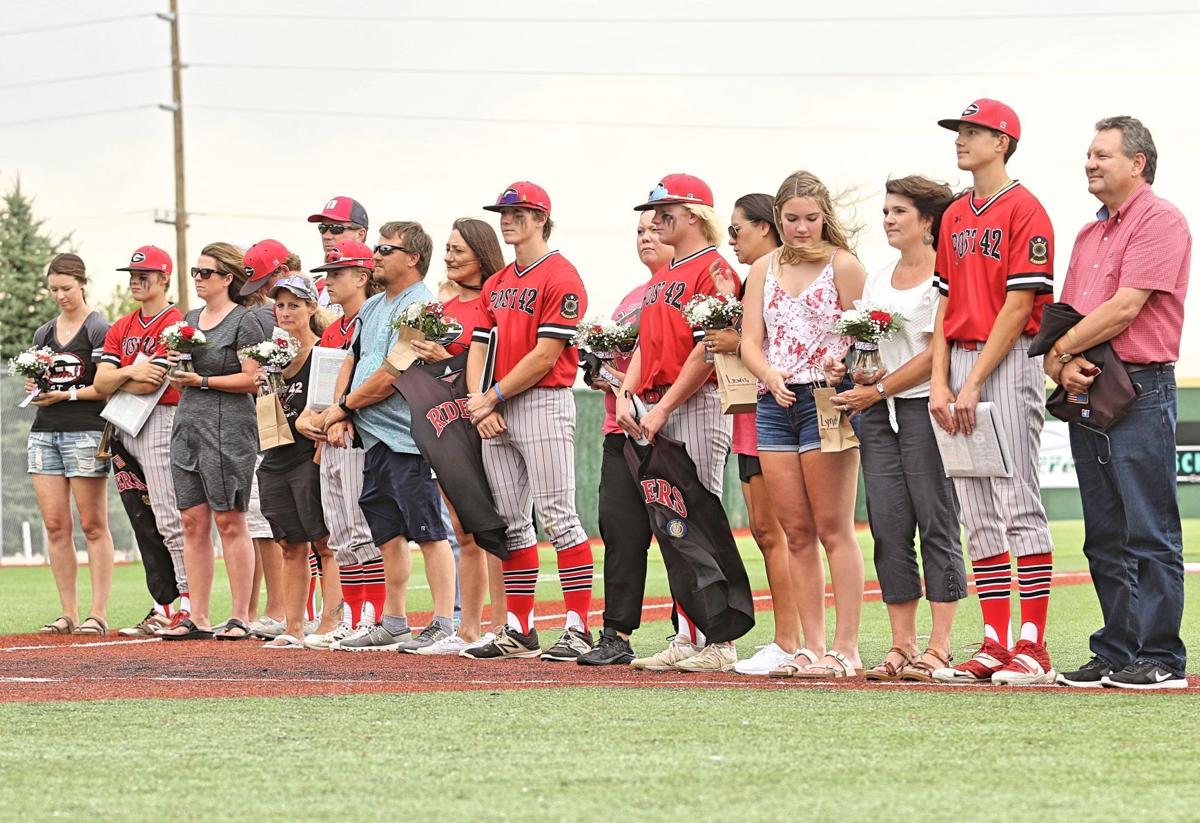 Seniors and family members line up on the field as players are recognized prior to senior night Thursday. The Roughriders swept Laramie at home by the scores of 3-2 and 9-3. 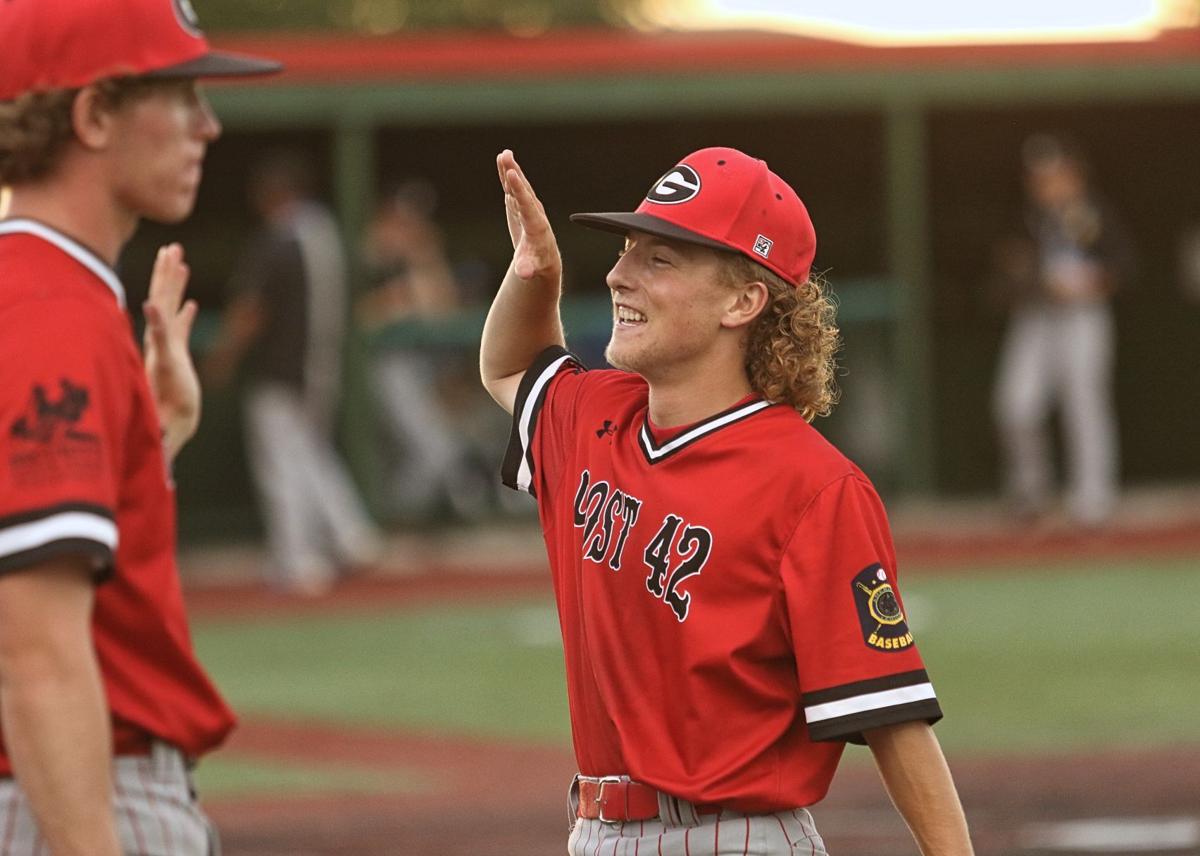 Gillette senior Dalton Martin comes back to the dugout with a big smile after getting the final out of the sixth inning Thursday night. The Roughriders started all eight seniors during the double header sweep over Laramie.

Seniors and family members line up on the field as players are recognized prior to senior night Thursday. The Roughriders swept Laramie at home by the scores of 3-2 and 9-3.

Gillette senior Dalton Martin comes back to the dugout with a big smile after getting the final out of the sixth inning Thursday night. The Roughriders started all eight seniors during the double header sweep over Laramie.

That’s been the goal for the Gillette Roughriders since a near-full season was salvaged from the COVID-19 pandemic.

The American Legion Post 42 baseball team has played 62 games going into the state tournament that starts Wednesday in Rock Springs.

Like many other seniors in the Class of 2020, Hayden Sylte’s high school sports career abruptly ended when the state championship basketball tournament was canceled in March. The axe fell on the entire spring sports season shortly after.

“With everything that happened at the state tournament (for basketball), I never want to experience anything like that again.”

Nate Perleberg, coach of the Roughriders for the past 15 seasons, has built a culture in Gillette’s American Legion program that stretches far beyond the baselines.

“We have a standard of excellence, the ‘’Rider Way,’ and character is a big part of that,” Perleberg said. “We act the right way on and off the field and we play harder than other Legion baseball teams.

“I don’t think it’s cocky to say that, because it’s the truth.”

Sylte is a testament to how the 'Rider Way' can pay off.

Sylte became the first Roughrider to commit straight to a Division I program last year when he signed with North Dakota State University. Sylte said he has the option to return to Gillette for one more season next summer, but hasn’t decided yet.

For Sylte and seven other seniors, Thursday may have been the last time they suit up in a Roughrider uniform at Hladky Memorial Stadium. Their doubleheader with Laramie to wrap up conference play was Gillette’s last regular season games before the state tournament.

Sylte said the team started the 2020 campaign knowing the regional tournament had already been canceled because of COVID-19. That placed an even higher value on the state tournament. Gillette continues to battle with rival Cheyenne Post 6, which has won state 16 times in the last 19 years.

“We thought it’d be a perfect way to cap the season,” Sylte said. “We always want to compete for state, but it’s definitely different this year.”

Perleberg said the Roughriders’ senior night is much like a senior night for a high school program, where the graduated seniors are honored and recognized for their contributions to the program through the years.

“Some of these guys have put five or six years into this program and it takes a special kid to make it through,” Perleberg said. “I’ve never had a kid make it all the way through to the end and regret it.”

Sylte, who joined the Roughriders program when he was 13 years old, said this year’s varsity team is the most mature he’s ever played on.

“It’s definitely bittersweet,” Sylte said. “It’s our last home game with this group. I’ve been in the Roughriders program since seventh grade.”

Senior Tanner Richards said he’s been playing baseball with the same core of teammates since he was in third grade. Richards said much of the success for the senior class on the diamond is a direct reflection of the “family environment” of being a Roughrider.

“A lot of our success comes from the chemistry,” Richards said. “I’ve been playing with the same group of boys all my life, (and senior night) is a special night.”

Unlike Sylte, Richards isn’t eligible for a return to the diamond next summer because of his year of birth, so Thursday was the last time his cleats met the turf of Hladky Memorial Stadium.

“There’s no better place to play,” said Richards. “I’ve made a lot of memories on that field through the years.”

Richards said he plans to walk-on to play football at Chadron State University in Nebraska after he retires the Roughriders uniform. As for his baseball career, Richards isn’t done quite yet.

“Our first goal and our main goal has always been state,” Richards said. “At the start of the season we didn’t really know what to expect or how many games we’d end up playing, so I just feel lucky to even have had a season, especially our last one together.

“But the goal is just the same this year. Win state.”

The Roughriders secured the conference title with a 3-2 win in Game 1, before Perleberg changed things up and started all eight seniors for the nightcap.

Bode Rivenes, a full-time pitcher, was playing first base. Dalton Martin got the start at second base and the catcher Richards actually punched out the final batter to end senior night with a 9-3 win.

After pitching an inning of relief, Martin was the one who had to hand the ball off to Richards to finish the game out. He was more than happy to do it, especially when he saw Richards coming out of the dugout smiling ear to ear.

“I didn’t mind handing that ball over at all tonight to get that final out,” Martin said. “The three years I’ve been watching him play on the varsity level, I’ve never seen him up on the mound.”

When Richards took the mound, the Roughrider bench found a new level of energy and so did the crowd.

“It was a lot of energy, honestly,” Martin said. “The whole crowd was going, the dugout was going and us on the field were getting going, too. It was phenomenal.”

Before the second game of the double header, the seniors lined the field with their parents at their sides. Mothers received flowers, players received plaques and the fathers got a mix of handshakes and hugs.

Then the Roughriders got to work and enjoyed the unique game to end their regular season.

After a long week, with two road double headers, Perleberg said it was a relief to be able to have some fun in Game 2 without all the stress.

“It was nice to be a little looser tonight and have some fun, knowing next week is really what our whole season is about,” Perleberg said. “It was a lot of fun. Not many times you get that many seniors and that many guys that have meant so much to the program.”