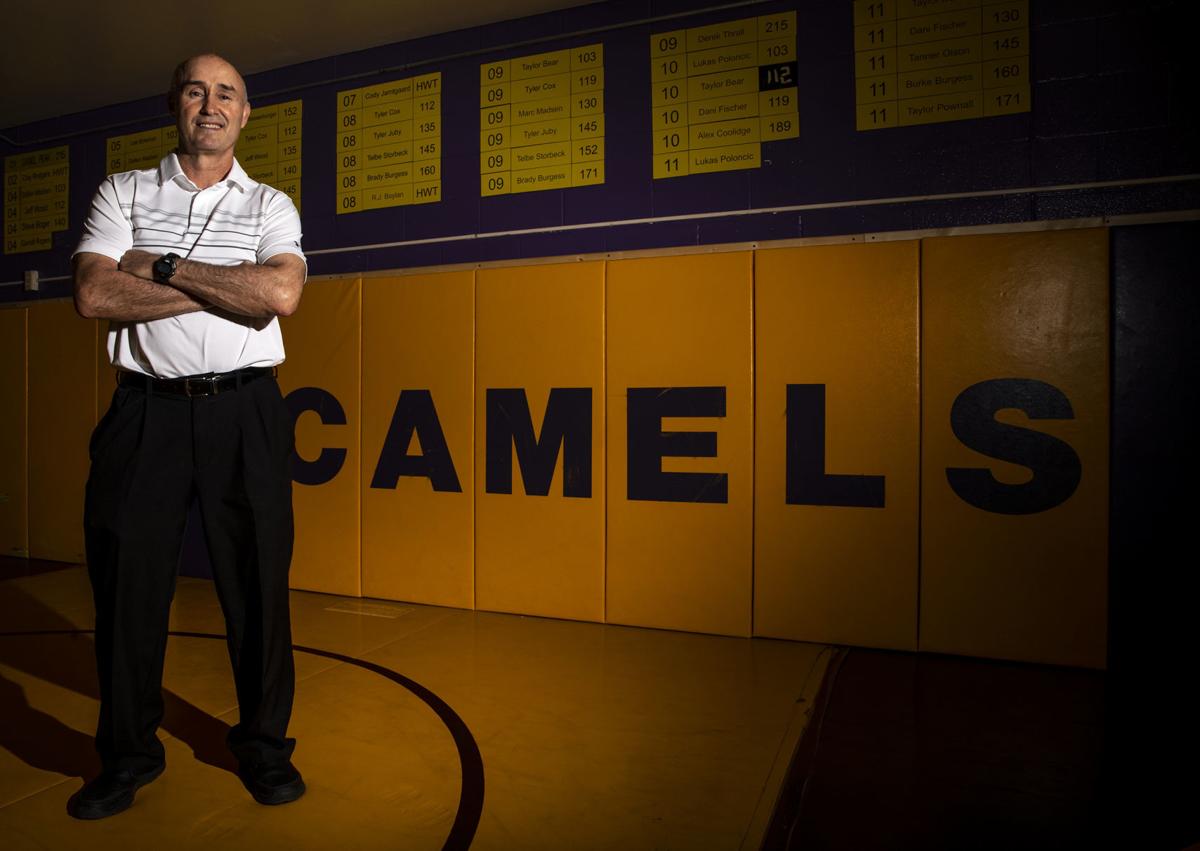 Tom Seamans’ tenure as the Camels’ head wrestling coach featured an impressive 13 straight state titles, 64 individual state champions and 49 runners-up. He said the time as head coach was one of the highlights of his life. 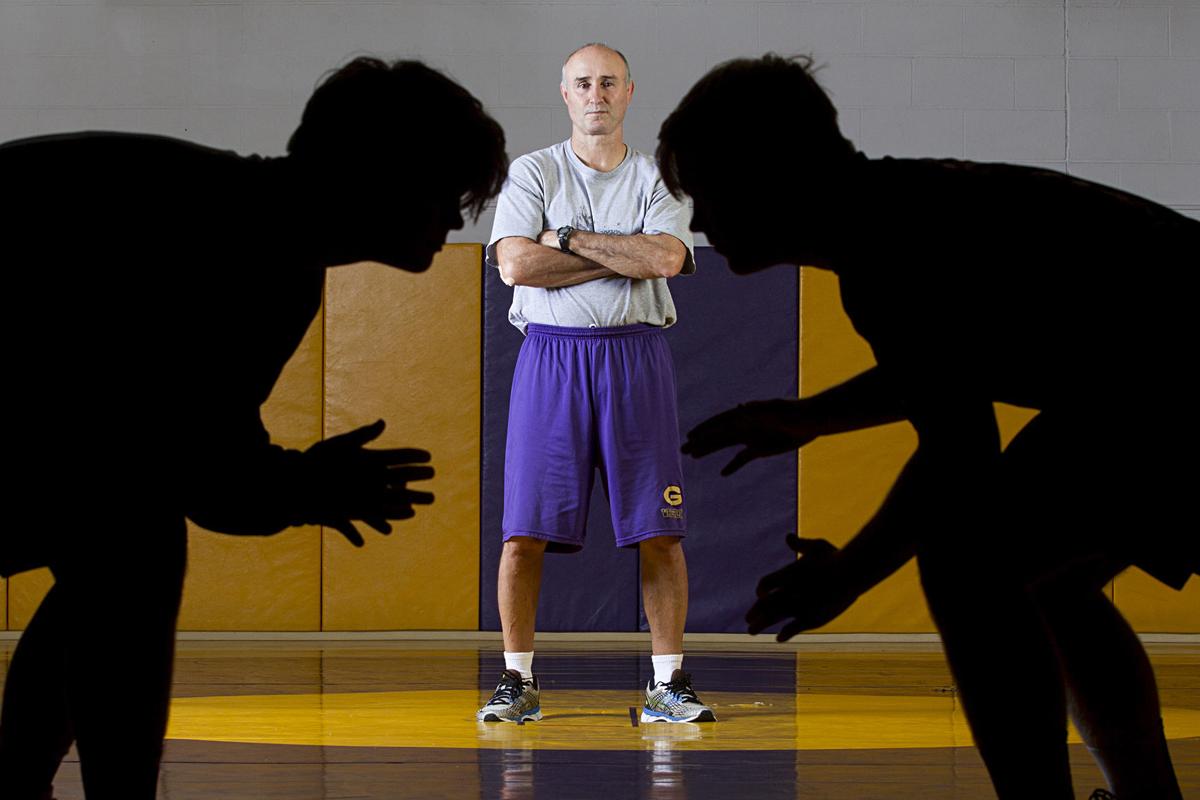 Tom Seamans led the Campbell County High School wrestling program to 13 straight state championships during his tenure with the Camels. After serving as the first activities director for Thunder Basin High School, the longtime coach and administrator has retired. 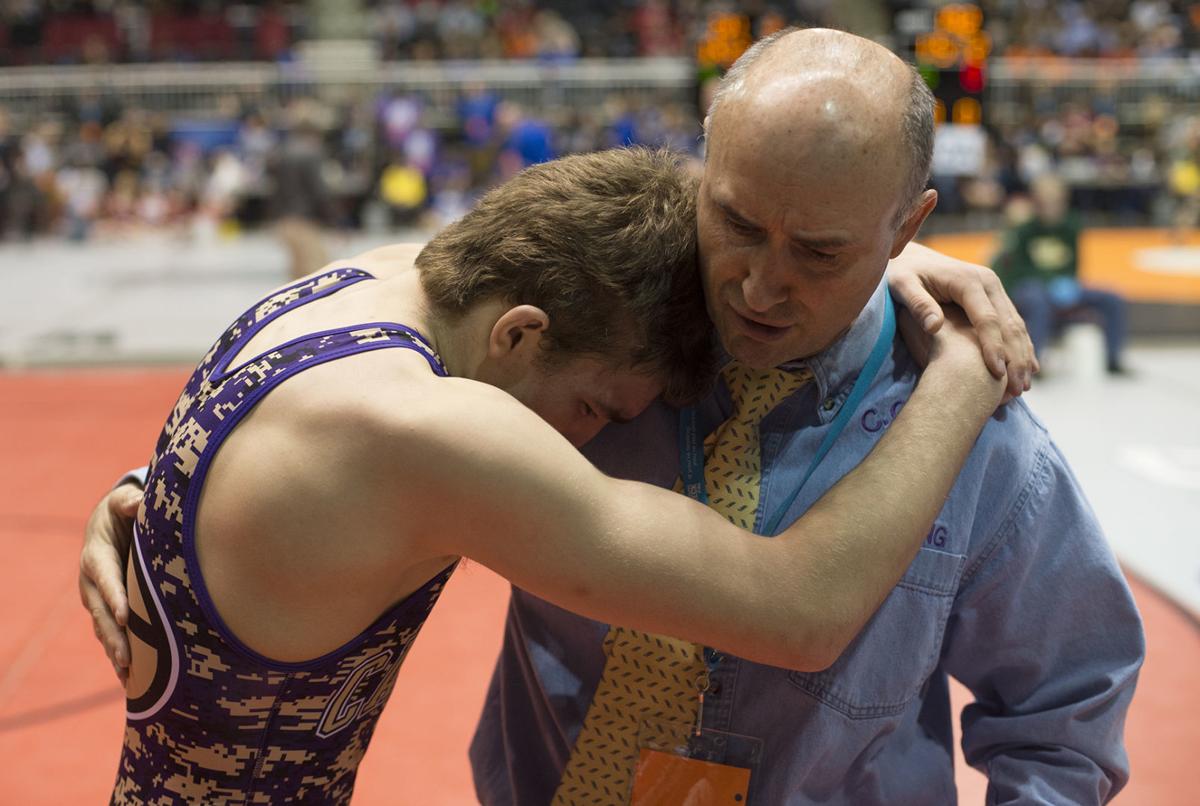 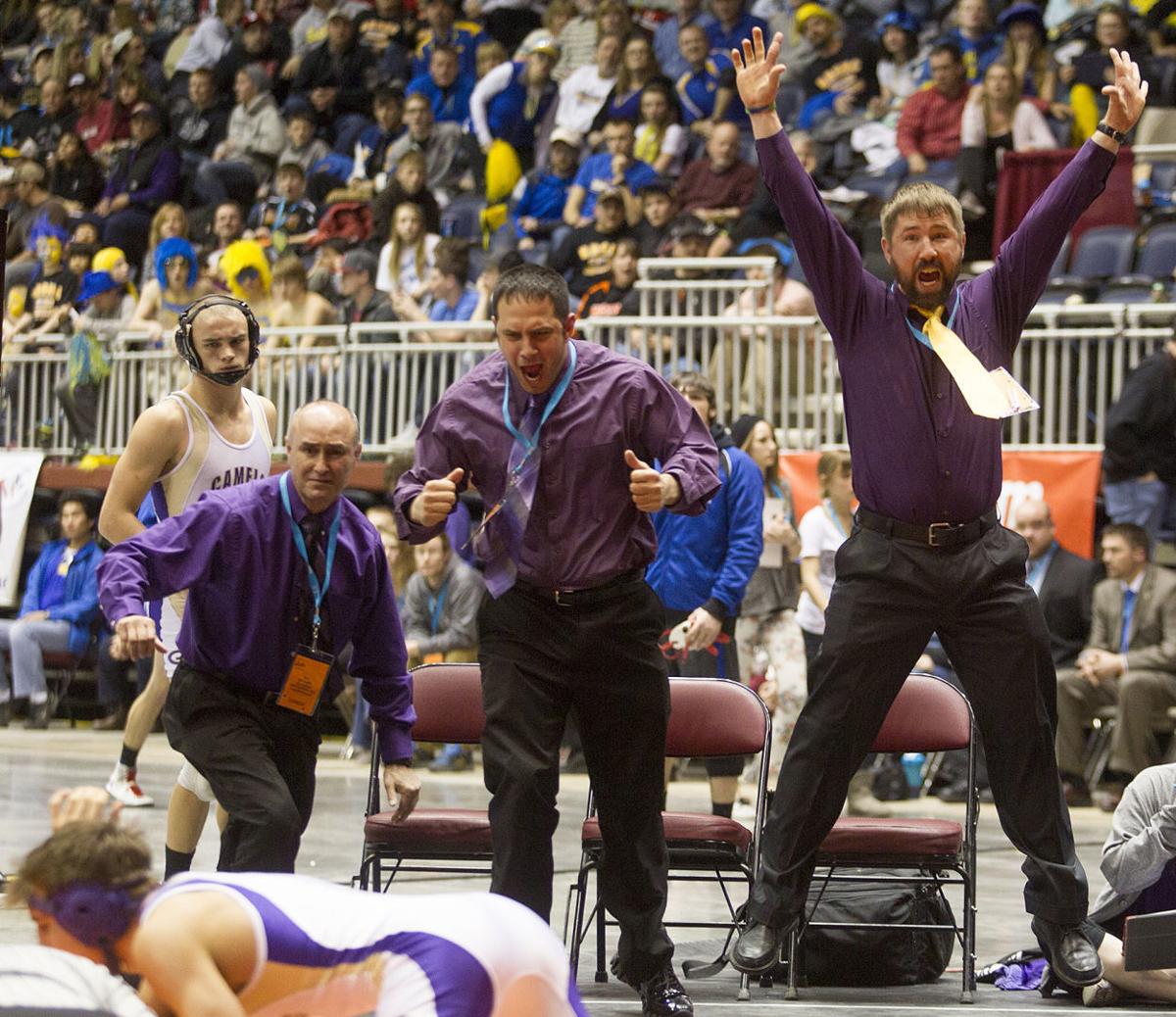 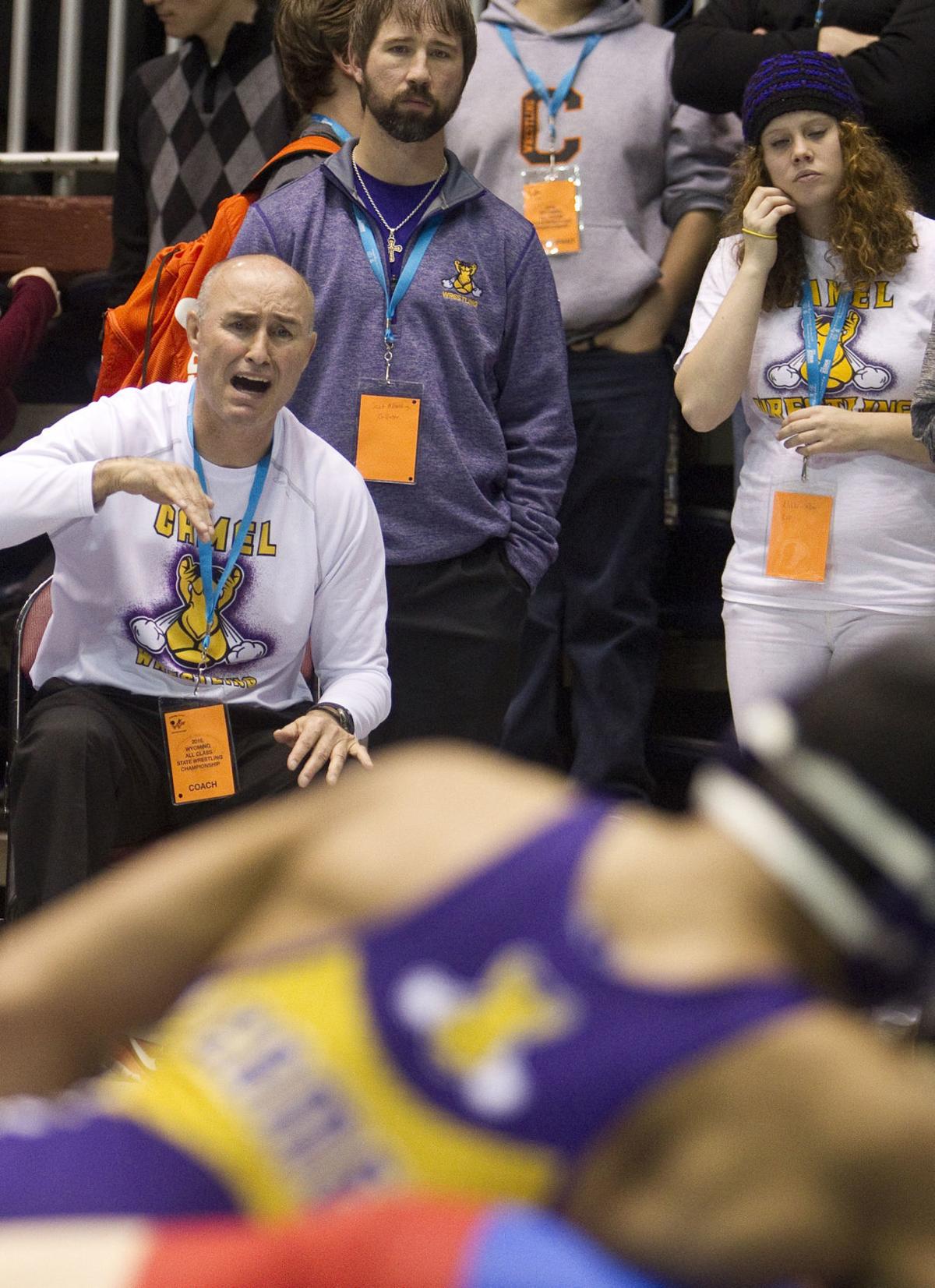 CCHS coach Tom Seamans shouts encouragement to one of his wrestlers Saturday during the 2016 Wyoming Class 4A State wrestling championships at the Caper Events Center.

Tom Seamans’ tenure as the Camels’ head wrestling coach featured an impressive 13 straight state titles, 64 individual state champions and 49 runners-up. He said the time as head coach was one of the highlights of his life.

Tom Seamans led the Campbell County High School wrestling program to 13 straight state championships during his tenure with the Camels. After serving as the first activities director for Thunder Basin High School, the longtime coach and administrator has retired.

CCHS coach Tom Seamans shouts encouragement to one of his wrestlers Saturday during the 2016 Wyoming Class 4A State wrestling championships at the Caper Events Center.

It was a run of dominance never seen before in Wyoming high school Class 4A wrestling. Thirteen straight state titles, 64 individual state champions and 49 runner-ups — all led by one coach.

Tom Seamans took over as the Campbell County High School wrestling coach ahead of the 2002 season and didn’t take long to bring the program to new heights.

The wrestling community knew it was getting a talented coach when Seamans was hired. He was coming off five state championships in 15 years at Green River High School.

But the question was how much could he elevate a Camels program that had already won three state wrestling titles in the previous decade?

Every wrestler set to enter his program knew Seamans was a top coach. But some also felt like it was the wrestlers, not the coach, that win state titles.

“When I was growing up, my brother and I thought it was more about the wrestlers. We weren’t so focused on the coach,” said Jordan Fischer, a three-time state champion and 2015 CCHS graduate. “It quickly became evident that it wasn’t the wrestlers. It was more coach Seamans that had to do with that.

But 18 years ago, Rodgers was a senior at CCHS the same year Seamans took over the Camels program. Rodgers said he’ll never forget how he felt when he learned who his new coach was.

“The first thing I said was, ‘The great coach from Green River?’” said Rodgers, a state champ at heavyweight. “His name was already so well known from his success in Green River.”

The Camels had four individual state champs during the 2001 season and the program “wasn’t in a bad spot by any means,” Rodgers said.

But the impact of Seamans’ coaching style was felt right away.

He implemented season-long two-a-days and practice became more intense. But it was his ability to get the best out of every wrestler that made CCHS a contender year in and year out, Rodger said.

That was quickly made apparant during his first two years at the helm. In 2002, Seamans coached the Camels to a third-place finish when Rodgers was just one of two seniors on the team. Rodgers said that was a “huge” accomplishment.

The next season, Campbell County won its first state title since 1998 — with no individual champions.

“Those first two years showed his coaching ability right away,” Rodgers said. “His demeanor and his philosophy started changing the program right away.”

It took every placing the Camels could muster to win the title by four points in 2003. But soon that gap began to widen between Gillette and the rest of the state.

The following year the Camels beat runner-up Casper-Natrona by 42 points at the 2004 state tournament. And by the time those freshmen had graduated, CCHS had won five straight state championships — the final one by 123 points over Natrona in 2007.

The Camels had six individual champions that season, including sophomore Telbe Storbeck, who beat senior teammate Tom Hooper in the 140-pound title match.

“We were all badass wrestlers. From 103 pounds to heavyweight, our team and JV team was stacked,” said Dallen Madsen, a senior on the 2007 team and a two-time state champ.

Iron sharpens iron, even for someone who came into high school planning on becoming a four-time state champion. That was always Tyler Cox’s plan and he was halfway there by the end of Gillette’s dominant 2007 season.

“We were so competitive, not just with other teams, but with each other,” Cox said. “We had such a talented team and had so many talented kids. We were trying to fight for that spotlight to get out there.”

Just as it started to seem like no Wyoming team could compete with the Camels, a new contender arrived on the 4A scene in 2008 — Star Valley. Cox called the previously Class 3A Braves a “really tough team” and it turned out to be the closest CCHS came to having its streak ended.

The Camels needed to win five of six state title matches that year or a team title was out of the question. Cox, Storbeck,Tyler Juby, and Brady Burgess all took care of business, leaving it up to heavyweight R.J. Boylan in the last match of the tournament.

Seamans remembers all his state champions, including Boylan’s dramatics to give CCHS the narrow four-point win in 2008.

But he also remembers a 103-pounder that year named Ezra Coleman. He didn’t place at big tournaments like the Ron Thon Memorial during the season, but scored crucial points for the team in 2008 with a fifth-place finish.

He remembers Devin Tutor, who saved the day when he had four pins to take third place after the team’s No. 1 140-pounder exited the tournament with a concussion.

Anthony Fleak, a 215-pounder, became a state runner-up in just his second year of wrestling after getting cut from the basketball team.

“You can have the stars, but if your other kids don’t perform you aren’t bringing home trophies,” Seamans said.

Seamans said having talented, hardworking wrestlers was the biggest reason for his coaching success.

“I was in the right place at the right time,” he said. “You don’t find many places that have kids who would put out that kind of effort year in and year out.”

Managing and maximizing that talent was where Seamans excelled, his wrestlers have said. It didn’t matter if he was coaching a four-time state champ or a freshman who may never finish higher than sixth place at state.

“Tom was the best at that. I’ve never seen a coach as good as Tom at knowing how to make each individual kid better,” Rodgers said. “Your top level kids, a lot of them would be a state champion no matter who coached them.

“But Tom knew the kids that he needed to focus on more.”

Madsen described a Seamans practice as “intense,” with brief breaks to discuss technique. Then it was back to going 100% against a training partner who was just as motivated for that No. 1 position.

When it came to coaching technique, it always started with the basics.

“Coach Seamans was always really good about making sure we were focused individually,” Cox said. “He knew that if we could perform individually at each weight, the team title was going to run away with itself.”

Seamans, now 58, often hit the mats himself during practice to demonstrate a move. Taylor Pownall, a 2011 graduate, said he was “amazed” at how good Seamans’ technique was, no matter what the style.

Some wrestlers specialize being on the ground. Others are better on their feet, like Fischer and his brother Dani, who was a four-time state champ for the Camels. Seamans could coach it all.

“Whatever you were good at, he was so knowledgeable that he would maximize your potential in that area,” Fischer said. “Very, very few coaches can do that. Most times they have a style and if you fit that style, you’ll excel. If not, it’s like fitting a square peg in a round hole.”

Pownall, a 2011 state champion, was one of many Camels to wrestle in college. He attended Chadron State College and now coaches high school wrestling in Laurel, Montana.

He still says Seamans is the best coach he’s ever been around.

“He’s just so good at everything that he did that I was just in awe to get to wrestle for him and learn from him,” Pownall said.

A part of the streak

As the streak continued to grow, so did the expectations in Gillette. Every wrestler coming through the program, especially the senior class, knew a state championship was the standard.

“When we were going through high school, we just never wanted to be the team that lost that. It was a huge sense of pride,” Pownall said. “If someone is going to lose it, it’s going to happen long after we’re gone.”

But that pressure never came from Seamans himself. His speech at the beginning of the season was always about winning for “this team,” not about living up to any standards from the past, Pownall said.

Seamans had a way of making his wrestlers want to win for their coach. And that’s what they kept doing.

The Camels returned to winning state titles in runaway fashion after Star Valley gave them the big test in 2008. Over the next six seasons, Campbell County won six more titles by an average of 76 points, bringing the streak to 12.

A blueprint for success was in place. The incoming freshmen looked to the seniors for the example and quickly understood that giving 100% to the program was fully expected, Cox said.

Even if the motivation wasn’t there at the beginning of the season, Seamans knew it would be there for the home stretch.

“Once we got to mid-January with about a month and a half left in the season, inevitably we would ramp it up and find an extra gear,” Seamans said. “By mid-February, we’d really be rolling. It didn’t matter if we had the so-called really great ones or just the hard-nosed kids that wanted to get after it.

“By the time we got to state, we were definitely a threat to win it.”

The Camels won their final state championship in 2015 before finally being dethroned the following season by Green River.

The coveted streak had ended. But being a part of it is something every Campbell County wrestler and coach will remember forever.

“It was just a great run,” said Seamans, who recently retired as TBHS activites director. “I’m thankful that I accepted a job here and it turned out to be one of the highlights of my life.”