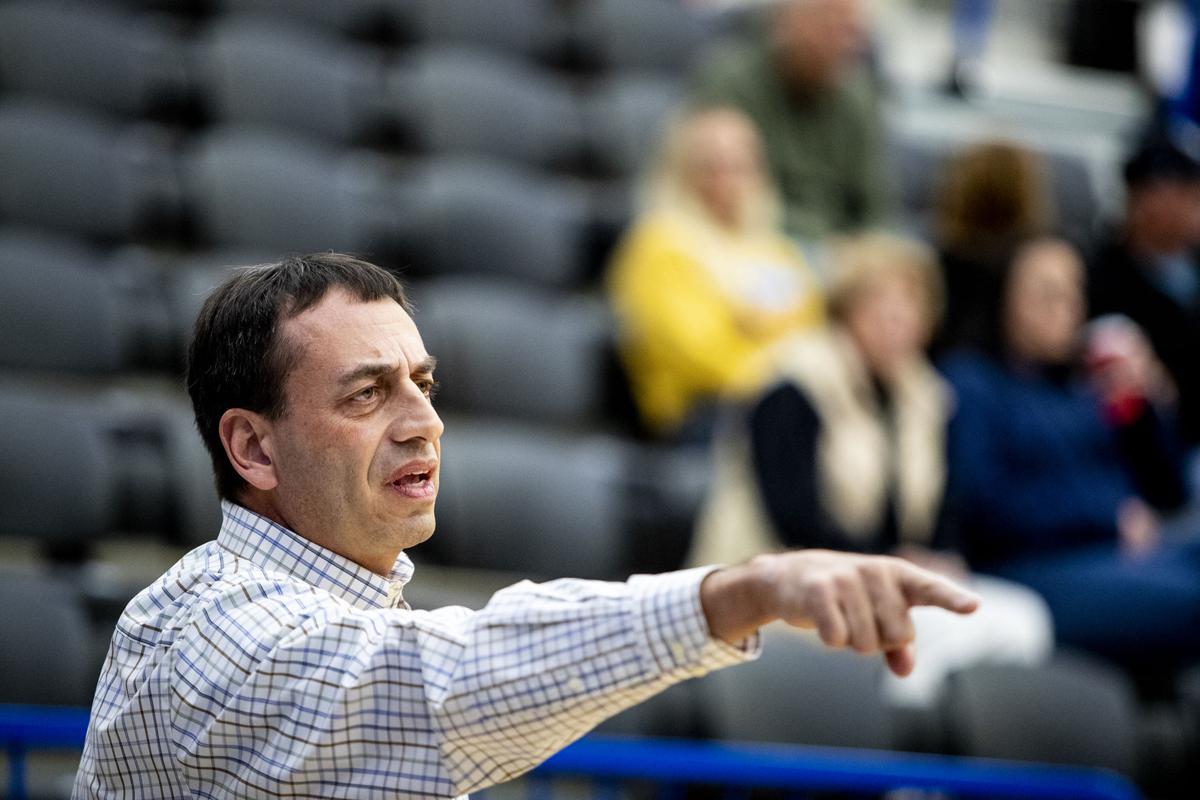 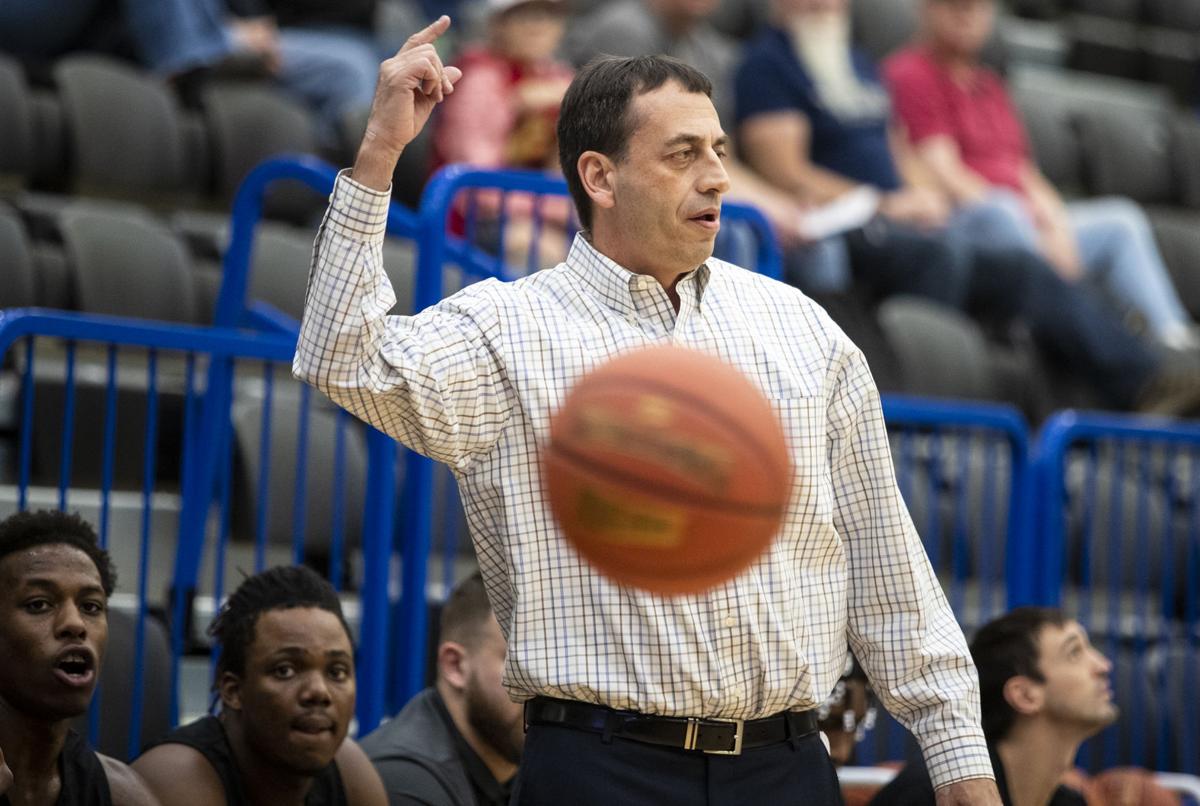 Former Gillette College coach Shawn Neary coaches in his first game in the Pronghorn Center since 2020 on Friday. Neary and the rest of his coaching staff was fired after the Northern Wyoming Community College District cut all Gillette College sports programs aside from rodeo for budget reasons.

Former Gillette College coach Shawn Neary coaches in his first game in the Pronghorn Center since 2020 on Friday. Neary and the rest of his coaching staff was fired after the Northern Wyoming Community College District cut all Gillette College sports programs aside from rodeo for budget reasons.

A familiar scene took place this weekend inside the Pronghorn Center at Gillette College.

Shawn Neary wore a plaid shirt on the bench inside the James Hladky Arena on Friday night. He spent the better part of an hour having conversations — often unpleasant — with the guys in the black and white striped shirts.

Friday was Neary’s first game coaching inside the Pronghorn Center since he was left without a job in 2020. Neary and the rest of his coaching staff were fired after the Northern Wyoming Community College District cut all Gillette College sports programs aside from rodeo for budget reasons.

Neary, who coached at Gillette College for 11 seasons, took over the Williston State College program this summer. When he accepted the job, one tournament on the Tetons’ schedule stuck out to Neary right away.

Friday was the first college basketball action the Pronghorn Center has seen in nearly two years.

It was bittersweet to coach inside his old home gym. It was made even more bittersweet coaching a team with colors other than the Pronghorns’ blue.

Perhaps the hardest part about coaching at Gillette College again was being inside the building he helped design years ago. Neary was the first and only coach in the Pronghorns’ 11-year history.

”You know it’s just kind of funky,” Neary said after Friday’s game. “It’s hard when you helped build this program from scratch when we started 0-0 as a program (in 2009) and I was part of the group that got to design this building.

”There’s a lot of bittersweetness. This tournament was already on the schedule when I got this job in July and I was just like ‘Wow, this is kind of weird.’”

During Friday’s game against Western Wyoming, Neary’s team overcame a 40-23 halftime deficit to battle back to within 10 points with a little less than two minutes to go. In those final minutes of the game, all the emotions of being back in the Pronghorn Center escaped him. Neary was all business.

Fans could have easily forgotten Neary was coaching for a different school when he was inside the Pronghorn Center this weekend. His mannerisms haven’t changed and neither has his vocabulary with the referees.

But when the final buzzer rang to give his team a 70-60 loss, the nostalgia of coaching back in Gillette all came back at once.

”I wasn’t sure how I’d feel tonight,” Neary said. “I was giving my assistant a tour today and he was just baffled by how nice this place is. ... This is one of the top 4 JUCO facilities in the country and it’s just sitting here collecting dust. And that is not OK.”

The more than $18 million Pronghorn Center opened in 2017. The basketball arena portion of the building seats approximately 1,800 but hasn’t seen much hoops action since the college’s own teams were cut.

Hope is still alive for Neary and other supporters for getting basketball back at Gillette College. With the recent special election passing in August to allow Gillette College to become its own district, things are moving in the right direction for college hoops to return to the Pronghorn Center on a regular basis, Neary said.

“The community stepped up and supported the tax and now it’s just a matter of getting Gillette College back to where it should be and where it belongs,” Neary said. “That includes great athletic and academic programs and community support — all the things that we were doing before the president in Sheridan shut it down.”

Neary wasn’t the only former Pronghorn coach at this weekend’s tournament. Liz Lewis and Janie Rayback, who were the head coach and assistant coach of the Gillette College women’s basketball team respectively, were both working as event staff for the Border Wars Tournament.

Lewis and Rayback both lost their jobs the same day Neary did. The coaching pair has stuck around Gillette and helped organized the WYBA, the organization that hosted this weekend’s college basketball tournament.

WYBA hosts several youth camps and tournaments throughout the year to start building basketball and life skills at a young age.

“It’s a little bittersweet,” Rayback said. “It’s hard not to have a Pronghorn team out here but it’s been fantastic to have college ball back in Gillette.”

The tournament gave kids in the WYBA the opportunity to have a front row seat to 17 college basketball games throughout the weekend. Kids were able to meet some of the players after the games and join in on distracting free throw shooters who had to shoot in their direction.

Bittersweet was a word that was said a lot this weekend for Neary and Rayback. The former Pronghorns women’s coach was able to watch Neary coach for the first time since they both lost their jobs almost two years ago.

“We were all in the same boat together,” Rayback said. “We’re all very close with the Neary family and we understand better than anybody how hard that was for him and his family.

“Just having him back in this building has been emotional. It was emotional to see but it was good to see him and hopefully indicative of the future.”