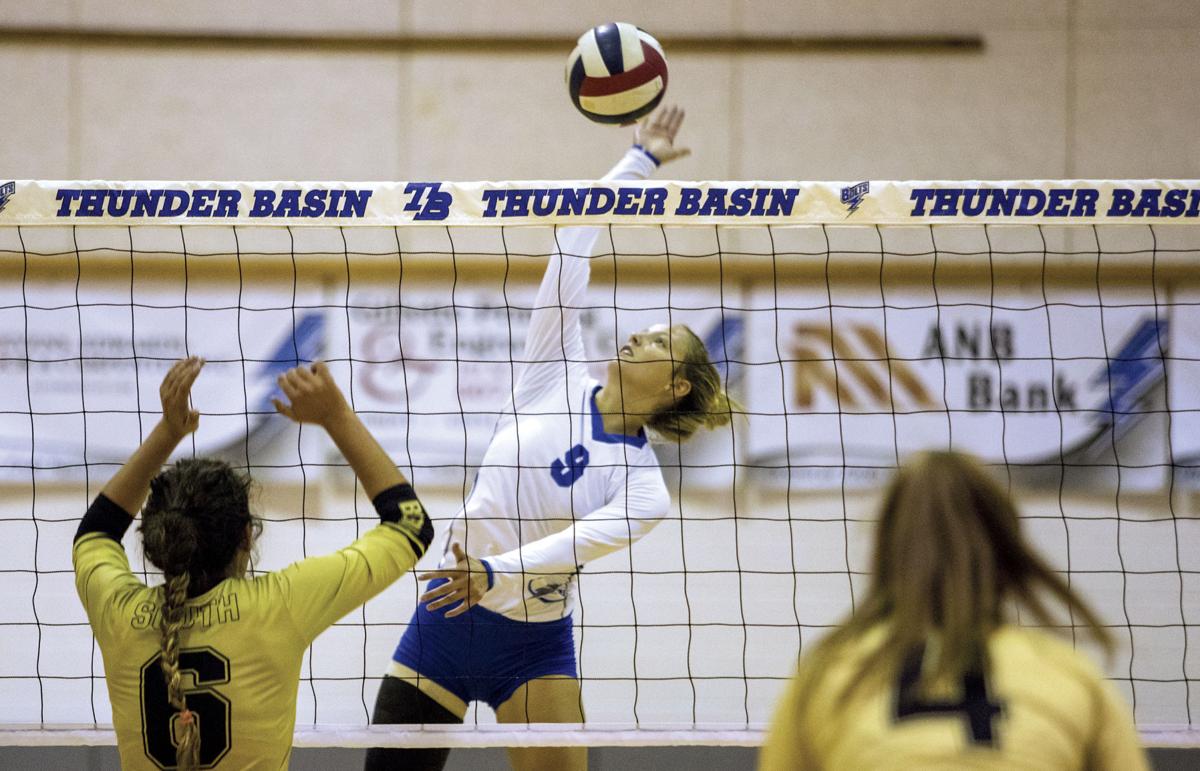 Gabby Drube, a senior at Thunder Basin, sends the ball soaring over the net against Cheyenne South at home earlier this season. 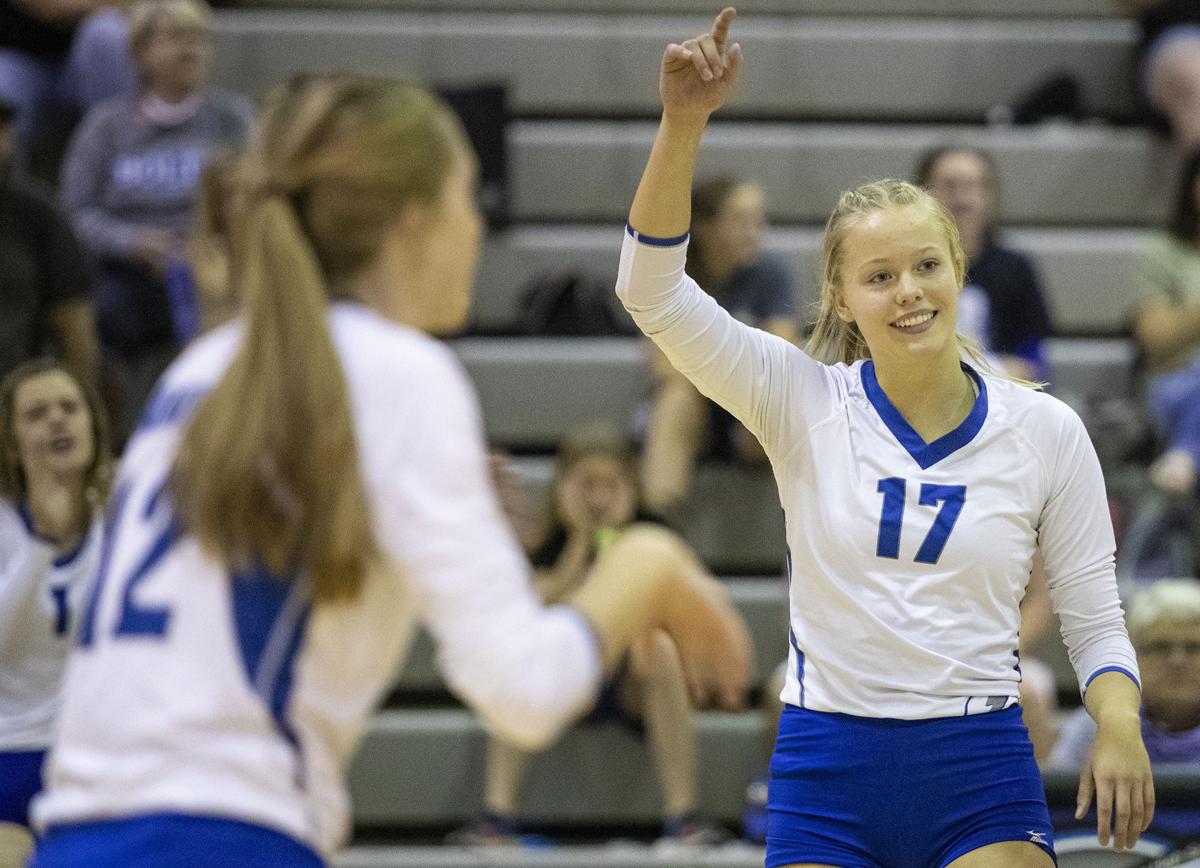 Thunder Basin High School senior Brooke Conklin, right, celebrates with her teammates after scoring a point during a game earlier this season.

Gabby Drube, a senior at Thunder Basin, sends the ball soaring over the net against Cheyenne South at home earlier this season.

Thunder Basin High School senior Brooke Conklin, right, celebrates with her teammates after scoring a point during a game earlier this season.

Thunder Basin and Campbell County high schools have been cross-town athletic supporters of each other, and rivals, since 2017.

The opening of Thunder Basin High School, as well as the lopsided results for some of the schools’ athletic programs, has been a sore spot for some in the Gillette community.

But for the athletes, particularly those in the class of 2021, the birth of a second high school has led to more opportunities to participate than before.

“I know some people like to look at the state titles and when we were all just Camels. But look at some of the things we have going for us, like how many girls now are playing volleyball and playing multiple sports,” TBHS volleyball coach Wenett Martin said. “How many kids now have opportunities that they wouldn’t have in the past?

“I think it’s given both communities, whether it’s in band or volleyball or football or speech and debate — you name it — it just has gotten more kids involved. When you had a population of 2,000 students, you were leaving half those kids out.”

The class of 2021 will be the first group of students at both high schools to attend either Thunder Basin or Campbell County all four years since the split.

As if that weren’t unique enough, this year’s seniors also will be the first class to have attended high school in the same building all four years versus the previous format of starting in the high school building as sophomores.

While the upperclassmen were given a choice of schools at the time of the split, the class of 2021 was one of the first to follow the junior high feeder system. A student attending Twin Spruce Junior High goes on to be enrolled at Campbell County for secondary education while students at Sage Valley Junior High go on to Thunder Basin.

There were exceptions to the feeder system, Martin said. The students who had siblings attending Campbell County could opt to switch schools to be with them.

Elsa Clark, Kate Hladky and Brooke Conklin were given that choice. The three came out of Sage Valley but all had siblings attending CCHS.

Still, the trio decided to give Thunder Basin a shot.

“I was very supportive of it,” said Ryan Conklin, Brooke’s father, about her choice. “We let Brooke make that decision and that was where a lot of her friends were going and that’s where she wanted to go.”

Like Martin, Ryan was impressed with how many more opportunities there are in Gillette for high school students to play sports after the split.

“I think it has definitely given a lot more kids the opportunity to play,” Ryan said. “Just this senior class alone, they have a lot of girls that are very athletic and it’s really allowed all of them to be able to play and to have fun.”

Thunder Basin volleyball’s fourth and final senior, Gabby Drube, is the only Bolts senior on the team who didn’t have a choice of which school to attend.

Clark, Hladky and Conklin took a leap of faith and have since reaped the benefits with Drube.

“For me it was a start to doing something new,” Clark said. “It was something that we could build up ourselves.”

Not only were the now-seniors taking a chance on Thunder Basin, but also on a head coach who was as new to Thunder Basin as they were.

“After we chose, we realized the right coach was coming here to teach us,” Conklin said.

The Bolts haven’t looked back since.

Thunder Basin has never placed worse than fourth in the state volleyball tournament during the seniors’ three years at Thunder Basin. That includes a five-set loss to Kelly Walsh in the state championship last season.

The loss is still an open wound for the Bolts, Martin said, but nothing motivates athletes more than a heartbreaking loss.

“We definitely all have it in our heads, let’s go win a state championship,” Clark said. “I think come state in November, we’re going to be ready to go out and play.”

While the decision to attend Thunder Basin was intimidating, this group of seniors wouldn’t take it back for anything.

“Throughout the years we’ve obviously improved,” Conklin said. “We’ve improved a ton and that’s exciting to see that in a new school.”

The split caused the volleyball program to begin building from the ground up, with the class of 2021 coming in as freshmen and immediately seeing playing time on the JV roster.

“We had to learn to play up because there wasn’t as many people. We were playing on JV as freshmen,” Clark said. “We just kind of had to learn how to survive.”

Now in its fourth year of competition, Thunder Basin has established itself as one of the most potent volleyball programs in the state.

“The program has grown a lot,” Clark said. “We’ve learned that we have to go hard all the time.”

While the rivalry between Thunder Basin and Campbell County varies from sport to sport, the volleyball teams have some of the most exciting cross-town battles.

“The games are so intense,” Conklin said. “And all those people come to support and watch us. It’s so much fun to be in that environment.”

While the rivalry is civil, the Bolts seniors said playing Campbell County for the last four seasons has been a special part of their experience at a new school.

Being a senior in high school can be a nostalgic experience, but Conklin doesn’t get caught up in looking in the past or thinking about what could have been at Campbell County.

“We just focus on what’s going on over here,” Conklin said. “We’re focused on us.”

Playing intense and competitive matches against rivals like the Camels, or even volleyball powerhouse Kelly Walsh, has led the Bolts team to a special kind of sisterhood that makes coming to Thunder Basin well worth it.

“We’re just best friends,” Clark said. “There’s no other way to explain it.”

Another nostalgic experience for a high school athlete is senior night, which the Bolts volleyball team had Friday night against Sheridan.

While COVID-19 has created a lasting paranoia that another high school sports season could be lost, the volleyball season has progressed without any hiccups despite facing the most adversity from the pandemic.

While football teams have been able to have up to 1,000 people in attendance, volleyball, since it’s played indoors, has been limited to 250.

Campbell County and Thunder Basin football teams both held senior night already to ensure the senior athletes could experience it.

“It’s scary, but it’s exciting,” Clark said. “We’ve all been playing since freshman year and we always would say, ‘Oh, I can’t wait for our senior night,’ and now it’s actually here.”

For Clark and her senior teammates, this season isn’t about the split from Campbell County High School.

This season is all about the continuing emergence of Thunder Basin.