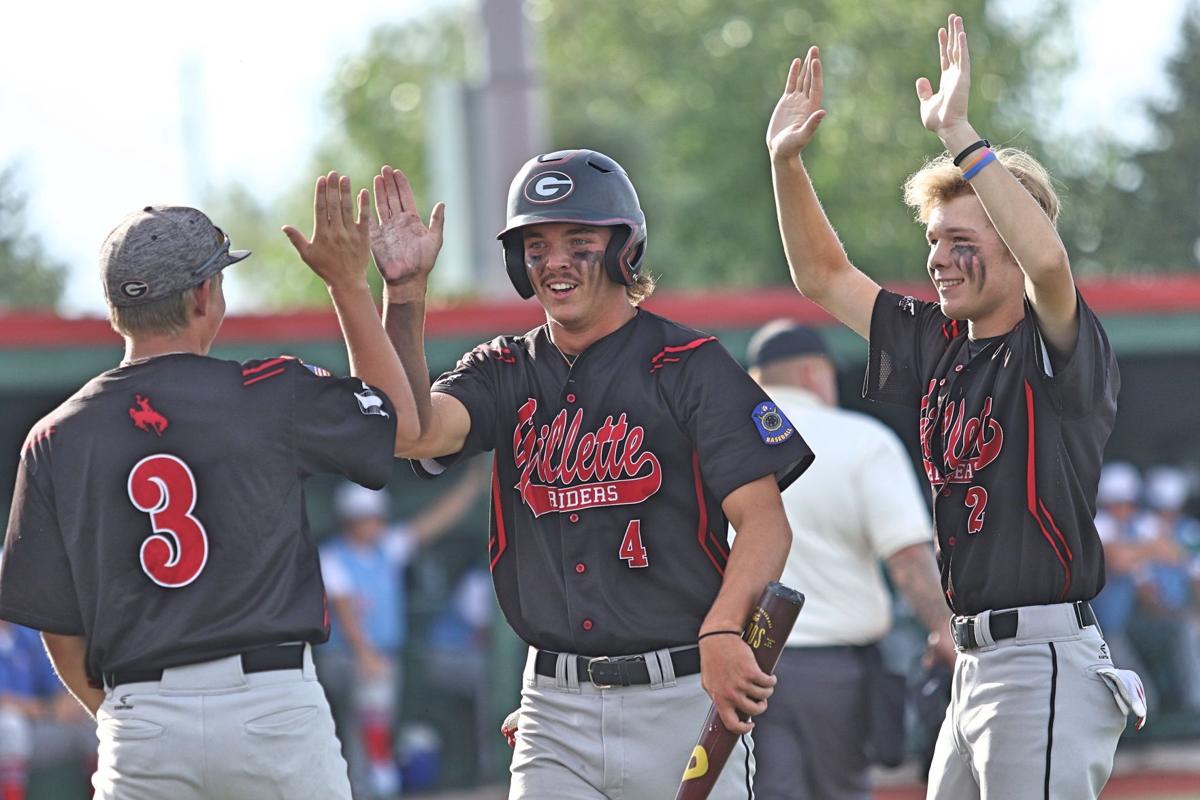 Gillette junior Kaden Race (4) gets a warm welcome as he returns to the dugout after scoring a run earlier this season. Race hit a grand slam to take the lead against Casper at the state tournament Saturday. 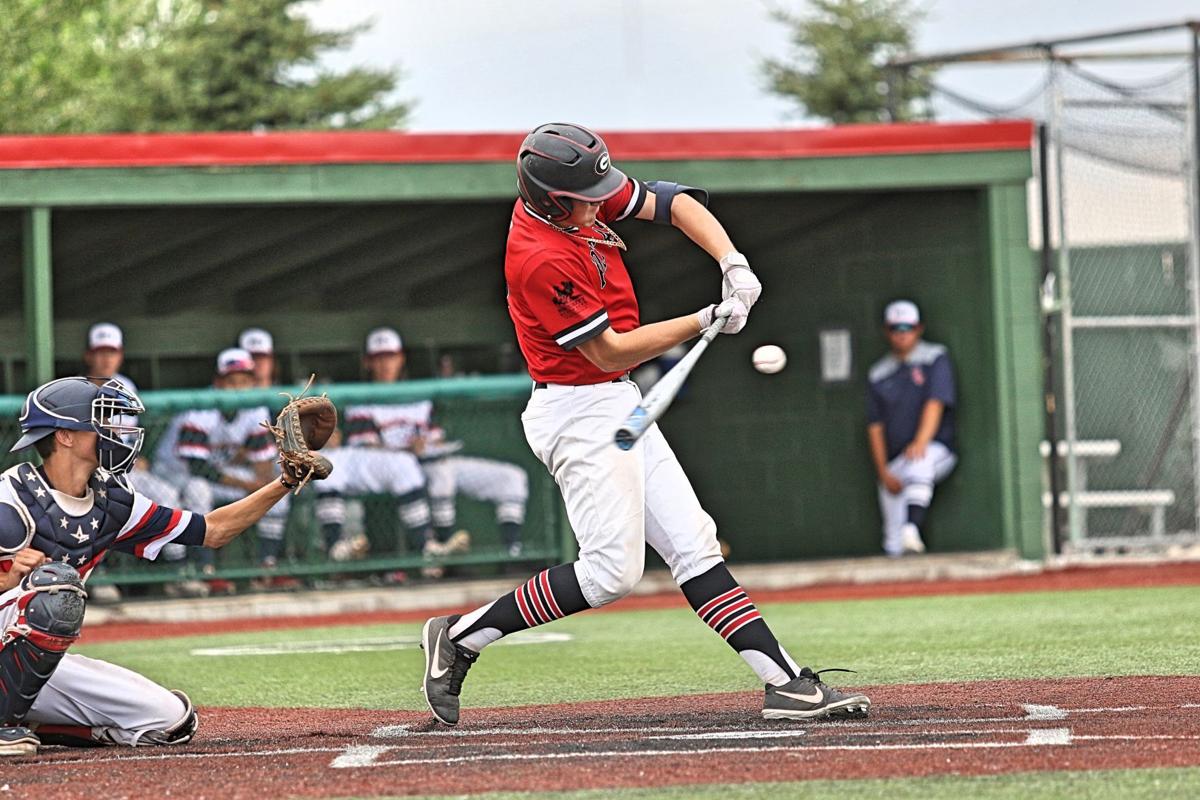 Gillette first baseman Mason Powell squares up a ball earlier this season at home. Powell hit two home runs Saturday night during a 14-4 win over Casper at the state tournament in Rock Springs.

Gillette junior Kaden Race (4) gets a warm welcome as he returns to the dugout after scoring a run earlier this season. Race hit a grand slam to take the lead against Casper at the state tournament Saturday.

Gillette first baseman Mason Powell squares up a ball earlier this season at home. Powell hit two home runs Saturday night during a 14-4 win over Casper at the state tournament in Rock Springs.

A night after giving up a crucial grand slam on the mound, Kaden Race turned the tables with a grand slam of his own Saturday evening for the Gillette Roughriders.

Post 42 faced Casper in an elimination game Saturday night at the AA American Legion State Tournament. Despite unpleasant memories from the loss to Cheyenne the night before, the Roughriders played like it was any other game and used three big innings to beat the Oilers 14-4 in Rock Springs.

The defending state champ Casper Oilers jumped out to a 3-0 lead in the first inning, but that was erased soon after by the bat of Race. The junior hit a grand slam in the bottom of the second inning to take a 4-3 lead and the Roughriders cruised from there on.

“At this point where you know that one loss and your season is over, you want to keep it loose and not think about the what ifs,” coach Nate Perleberg said. “We’re winning now and sending teams home. We scored 14 runs today and got the offense going. That’s going to be key.”

Mason Powell carried Gillette to the winner’s circle after it took the 4-3 lead. The college returner hit two home runs, one in the fourth inning and one in the sixth, and drove in six runs on the way to the 10-run win.

Despite his and Race’s contributions, Powell said he’d give Bode Rivenes the player of the game accolades. The senior pitcher was put into a tough spot in the first inning when he was called on to relieve Jason Fink with the bases loaded and one out.

But Rivenes wasn’t phased by the unexpected early appearance. He nearly forced Casper into a double play against the first batter, then struck out the final batter of the inning to get out of the jam.

“It’s really exciting,” Rivenes said about being called into a state tournament game. “At the same time, you just have to get locked in. It’s go time at that point. With our season on the line, there’s no room for not being at your best.”

It was Rivenes’ final outing of his senior year and he finished with 5.2 innings pitched, one earned run and a stellar 13 strikeouts. He said he wasn’t nervous at all coming into the game and painting his fastball on the outside corner was his best pitch on the night.

After Rivenes steadied the ship, the Roughrider bats got hot at Rock Springs’ ball park, which is smaller than Hladky Memorial Stadium in Gillette.

The Roughriders loaded the bases by drawing three walks in the bottom of the second inning, which brought Race to the plate. He hadn’t hit a home run all season, but barreled up a ball that just carried over the wall. The grand slam gave Gillette a 4-3 lead in the blink of an eye.

It was a moment of redemption for Race. He said he just didn’t have his stuff on the mound Friday night during the loss to Cheyenne. But Saturday’s homer seemed to make up for giving up the grand slam on the mound.

“Hitting that one definitely made me feel like I got those runs back that I gave up last night,” Race said. “It was kind of a bit of a momentum shifter. It just got everyone’s head back in it and we just rolled from there.”

After an RBI single by Brody Richardson made it 5-3 to end the second inning, Gillette dealt the final knockout punches with a five-run outburst in the fourth and then four more runs in the sixth inning.

Powell’s first home run of the night came in the fourth inning, a two-run bomb to make it 7-3. Then Cole Swisher, Garret Lynde and Tanner Richards also drove in runs to finish out the fourth inning, which pushed the lead up to 10-4.

The Roughriders scored the game’s final run in the same fashion that they scored their first. A single and three walks loaded the bases in the sixth inning, which brought Powell to the plate again. He stayed hot, hitting his fourth home run of the tournament to make it 14-4 and end the game due to the 10-run difference rule.

Even after going down 3-0 in the first inning, the Roughriders didn’t lose a bit of focus, which Rivenes said would’ve happened with this group a year ago. Powell was one the the team leaders that didn’t let the 'Riders get down on themselves after Friday’s loss.

“That was huge for us, especially after losing a really tough one last night. To come back like that was big,” Powell said. “We started the game off down 3-0 and that was kind of nerve racking, but we were able to stay even keel and stay mature.”

After the win, Perleberg said the team was “singing and dancing,” while listening to music on the bus. The Roughriders were loose and confident Saturday, even after Friday’s tough loss, and they plan on carrying that into Sunday.

“We wanted to play kind of loose and have some fun today and we’ll look to do the same tomorrow,” Perleberg said. “It’s not going to be easy, but our guys are definitely capable of going out and putting two games together and winning a state title. That’s the plan.”

After Cheyenne Post 6’s win Saturday night, Gillette will have to beat the Sixers twice Sunday in order to win the state title. However, Gillette still has enough firepower on the pitcher’s mound, while Cheyenne burned both of their top arms Friday and will be shorthanded.

“I think we have as good or better pitching than anyone left in the tournament,” Perleberg said. “That’s part of the confidence right now.”

Gillette's first game Sunday will be at noon against Cheyenne and a win would give it a chance to play the Sixers again at 3:30 p.m. for the state title.