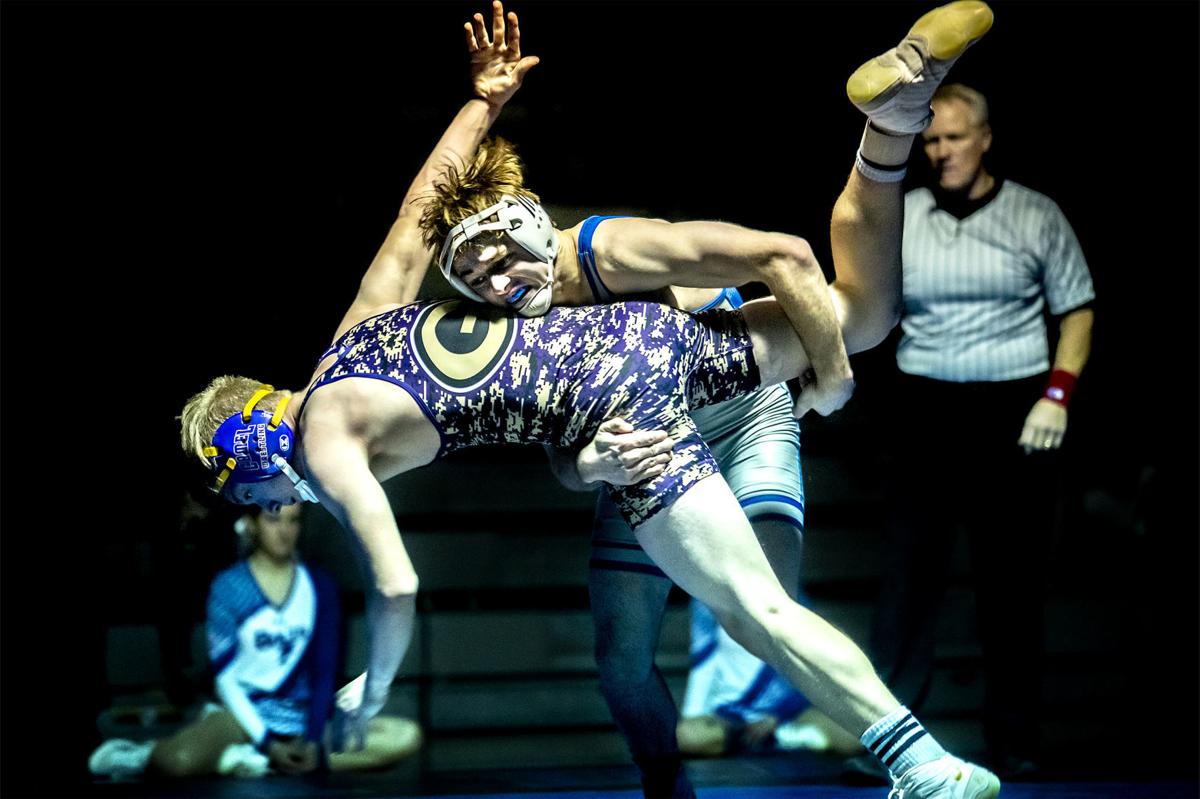 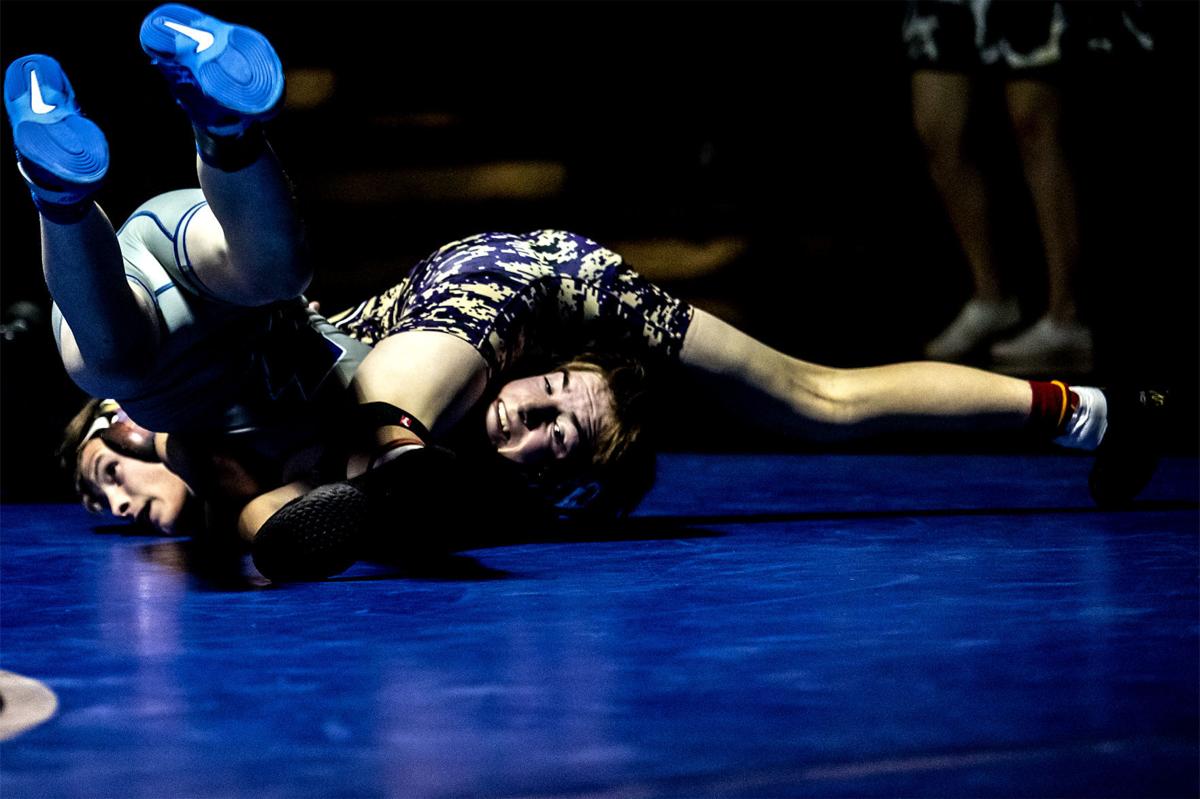 The Bolts’ Grady Edwards looks for a way out of Camels’ Darron Provost grasp at the wrestling duel between Thunder Basin and Campbell County on Tuesday. 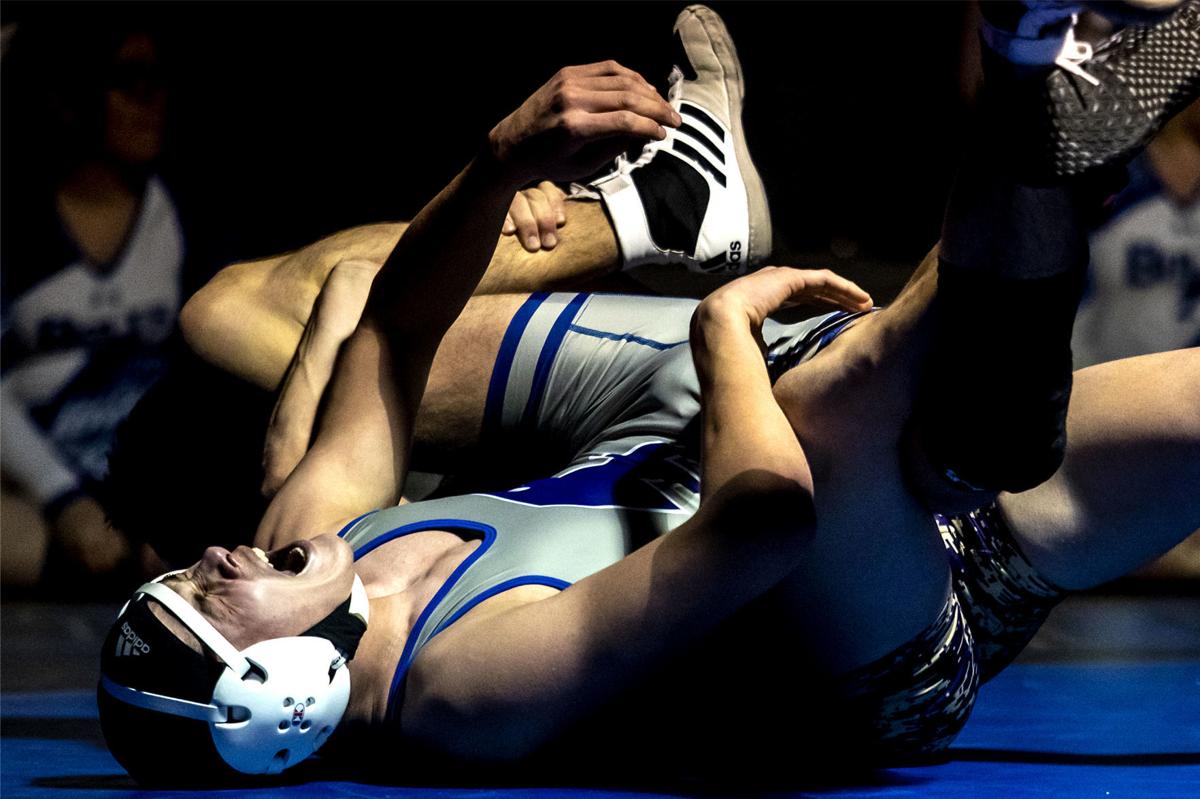 The Bolts' Ayden Jorgenson grimaces as he wrestles the Camels' Dawsen Hayden at the wrestling duel between Thunder Basin and Campbell County on Tuesday. 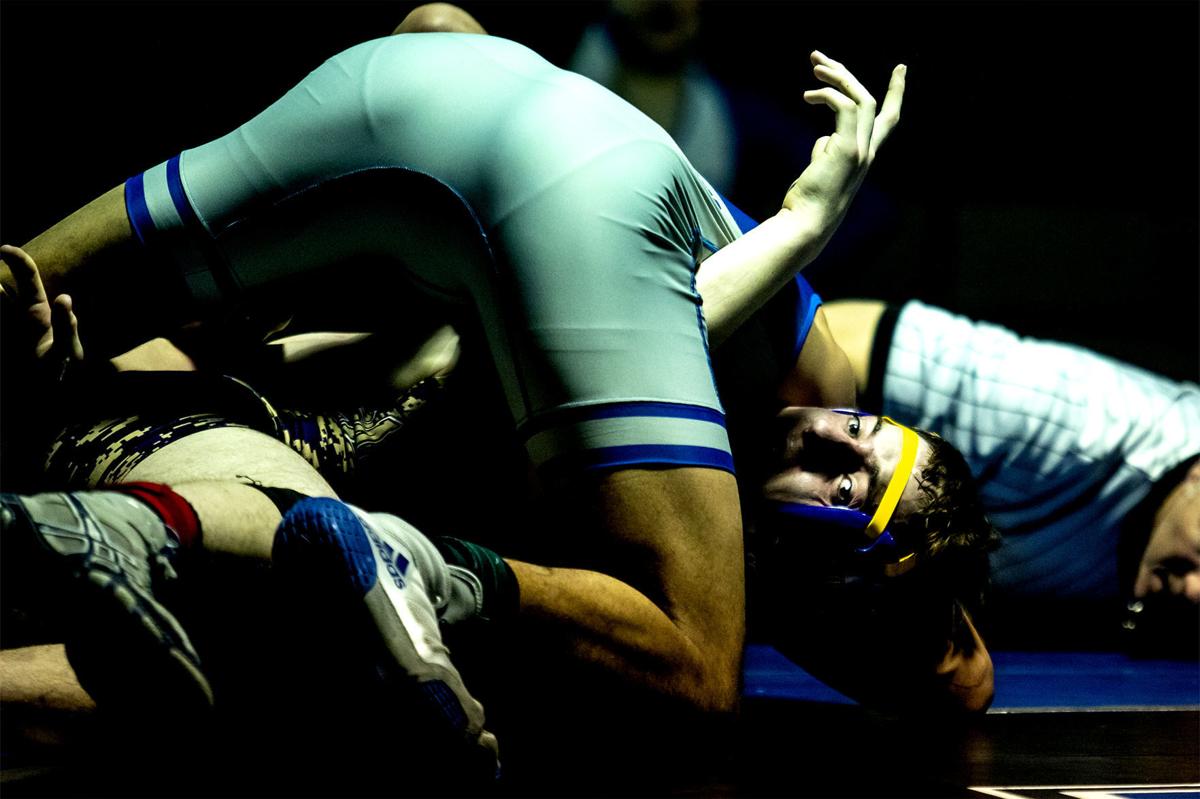 The Camels’ Hunter Henderson looks for a way out of Bolts’ Keanyn Weber’s grasp at Tuesday’s Campbell County and Thunder Basin Wrestling Duel. 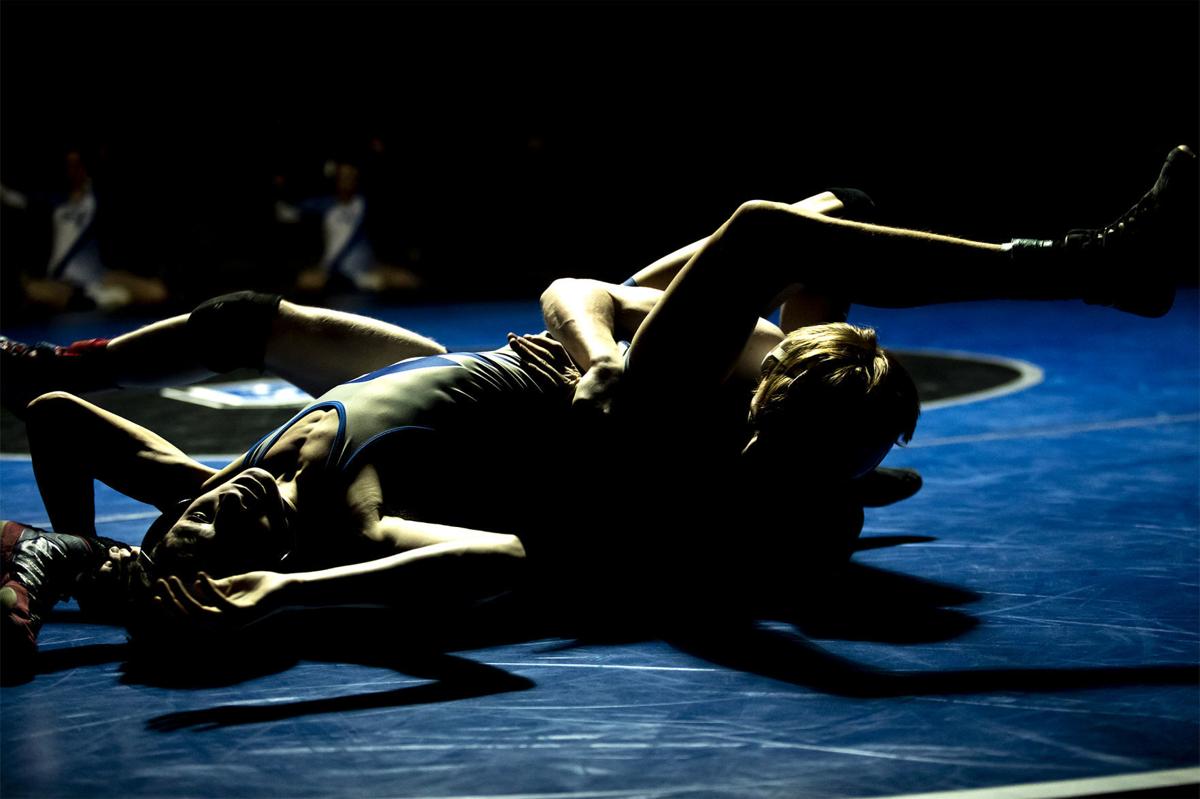 Limbs flail as the Camels' Colt Welsh puts the Bolts' Alex Draper in a leg lock in Tuesday's wrestling duel between Thunder Basin and Campbell County.

The Bolts’ Grady Edwards looks for a way out of Camels’ Darron Provost grasp at the wrestling duel between Thunder Basin and Campbell County on Tuesday.

The Bolts' Ayden Jorgenson grimaces as he wrestles the Camels' Dawsen Hayden at the wrestling duel between Thunder Basin and Campbell County on Tuesday.

The Camels’ Hunter Henderson looks for a way out of Bolts’ Keanyn Weber’s grasp at Tuesday’s Campbell County and Thunder Basin Wrestling Duel.

Limbs flail as the Camels' Colt Welsh puts the Bolts' Alex Draper in a leg lock in Tuesday's wrestling duel between Thunder Basin and Campbell County.

Campbell County High School hung around through the first four matches Tuesday night before the cross-town Thunder Basin wrestling team pulled away for a 53-18 victory.

Two straight wins to start the dual gave Thunder Basin a 10-0 lead. Then the Camels woke up to close the gap to 10-9 with two wins of its own, but that was as close as they would get.

The Bolts had their way for the rest of the dual and pulled away with a series of pins for a convincing 35-point win.

“I think our team did really good. We put in a lot of effort in this one. We really wanted it and you could tell,” TBHS senior Zion Morbeto said. “I think it does get more focused against the Camels, just because of the school rivalry and stuff.”

The dual started at 145 pounds, where Thunder Basin’s Keanyn Weber rolled to a 13-0 major decision to give the Bolts some momentum. Weber spent a portion of the match on his back, but said that “you’ve just got to fight and be mentally tough down there.”

“It felt good to start like that. I kind of just had to set the pace for the team. I did what coach told me to do — just go out there and dominate,” Weber said. “That’s what I was going for and that’s kind of what I did out there.”

Weber was followed by one of Thunder Basin’s star seniors, 152-pounder Warren Carr. He had multiple takedowns during the win and pinned Campbell County’s Kiefer Gossel with 13 seconds left in the first period.

The Camels responded with a pin of their own at 160 pounds. CCHS senior Dawsen Hayden was in control most of the match and a late move led to a pin with 19 seconds left in the first period to cut the team deficit to 10-6.

CCHS junior Devon Harrison and TBHS sophomore Aidyn Mitchell squared off at 170 pounds for one of the most exciting matches of the evening. Mitchell led 4-1 after the first two periods, then the fireworks started to fly.

Both wrestlers scored within seconds of each other on reversals early in the third period, but Harrison still trailed with a minute left. He turned the tables with about 40 seconds on the clock, scoring on another reversal and a near fall to steal the lead late and win 8-6.

“The third period comes around, I look up at the scoreboard and I’m like, ‘It’ll happen.’ Then I see my dad stand up in the stands saying, ‘It’s time to go,’” Harrison said. “(Mitchell) beat me when we went to Douglas this past weekend, so I kind of came for revenge.”

The Camels only trailed 10-9 after Harrison’s win, but two open weights at 182 and 195 gave the Bolts 16 quick points. Then at 220 pounds, TBHS senior Brock Sather controlled Jack Tinnell and finally flipped him to his back midway through the second period to extend the lead to 28-9.

Things didn’t get any easier for CCHS at heavyweight, as TBHS senior Dalton McInerney faced off against Colter Rankin. Rankin put up a fight and became one of the few opponents to survive the first period against McInerney this season.

But McInerney stood Rankin up about 10 seconds into the second period, threw him to the mat and pinned him. That gave TBHS a commanding 34-9 lead, but the Camels made another push when the lineup flipped to the lighter weights.

Freshman 106-pounder Darron Provost said he knew he was going to win “when I walked out there.” He waited until the very end of the first period before pinning TBHS freshman Grady Edwards with just three seconds left.

The Camels notched another win at 113 pounds. Sophomore Colt Welsh survived a late push by TBHS sophomore Alex Draper. Welsh led 4-0 after two periods and 8-2 late in the third, but he had to fight for the win after a reversal and near fall by Draper closed the gap to 8-6 in the final seconds.

Like many of the opponents who wrestled each other Tuesday night, Welsh and Draper have competed and trained together for years, TBHS coach Mikah Kadera said.

“Some of these kids have been wrestling each other in club for their entire lives,” Kadera said. “Some of those matches were ex-teammates, ex-drill partners, workout buddies.”

That was the final win for Campbell County, but coach Clay Rodgers said he saw a lot of improvement from a 53-24 loss to the Bolts earlier in the season.

“(I feel) even better than the first one. I was happy after we wrestled them at the Pat Weede and am even happier tonight,” Rodgers said. “It’s tough to get these teenage kids to realize that even when they lose, to find the positives in things.”

The Bolts won the next four matches to close out the dual, starting with six points from sophomore Seamus Casey. He was ahead 15-3 late in the third period before pinning senior Jaron Glassrock with 48 seconds left.

TBHS junior Jeric Igo wrestled up a couple of weight classes from his usual 113 and pulled out an 8-3 major decision at 126 to give Thunder Basin the 44-18 lead. Then Morbeto took to the mat and tallied the Bolts’ final pin midway through the second period.

“It wasn’t amazing, but I think that was probably one of my best matches, so I’m pretty happy about it,” Morbeto said. “It makes you feel good when it’s second-to-last match and it’s a win. The team’s still hyped up and you don’t lose the hype.”

During the losses Tuesday, the Bolts were usually being aggressive and going for a pin, which is something you can live with, Kadera said.

“Our effort was there. We just have to be smarter in certain positions. But overall, we wrestled well,” Kadera said. “As long as we learn something from every match — and I think that we did — then we’re moving in the right direction.”

“I’m sure people in the stands are saying, ‘Man, they’re out of shape bad,’ and maybe we are a little bit,” Rodgers said. “One thing I just told them is that we can run sprints for an hour at practice every night, but if they’re only running them 50%, it doesn’t do any good.

“I think if we get in a little better shape and learn how to hustle a little more in certain positions, that technique stuff will start working and paying off.”

The CCHS varsity is headed to the Newcastle Invite on Friday and Saturday, while the Bolts wrestle at the Border Wars in Sheridan on Saturday.