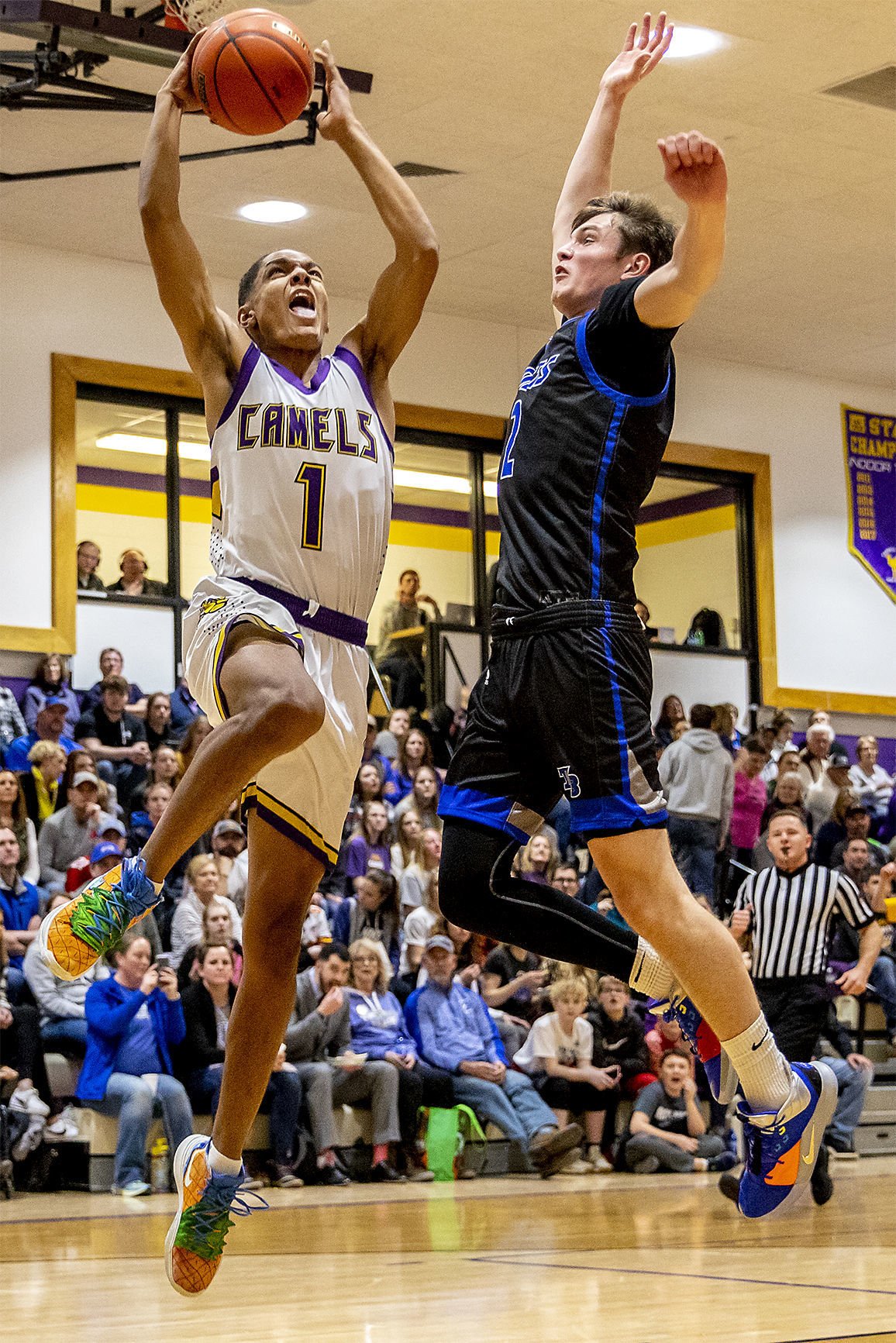 Campbell County’s Gabe Gibson goes up for a basket as Thunder Basin senior Blaine Allen attempts to block his shot earlier this season. The Bolts and Camels will face No. 1 Cheyenne Central and No. 2 Cheyenne East at home this weekend. 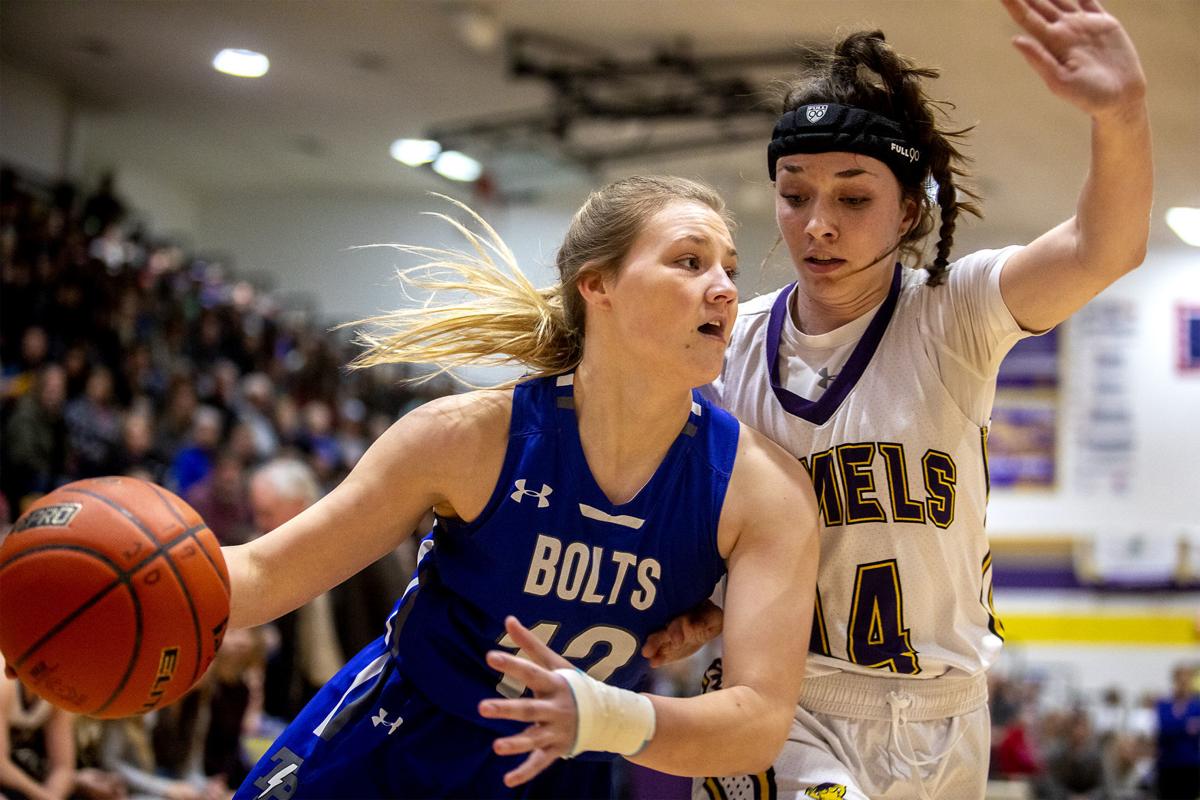 Thunder Basin senior Jersie Taylor makes a run for the basket as Campbell County junior Shaelea Milliron defends earlier this season. The Bolts and Camels will play No. 1 Cheyenne Central and No. 2 Cheyenne East this weekend.

Campbell County’s Gabe Gibson goes up for a basket as Thunder Basin senior Blaine Allen attempts to block his shot earlier this season. The Bolts and Camels will face No. 1 Cheyenne Central and No. 2 Cheyenne East at home this weekend.

Thunder Basin senior Jersie Taylor makes a run for the basket as Campbell County junior Shaelea Milliron defends earlier this season. The Bolts and Camels will play No. 1 Cheyenne Central and No. 2 Cheyenne East this weekend.

The Camels host Cheyenne East and Cheyenne Central in a pair of games that will feature tough tests for both CCHS squads. And for the Campbell County boys, that means playing the state’s No. 2-ranked team in East on Friday, then No. 1 Central the next day.

The CCHS girls (6-10 overall) also go into the weekend with momentum having won two games last weekend while holding opponents to fewer than 45 points in each.

After starting the season 2-9, the Camel girls have won four of their last five games.

Junior Shaelea Milliron leads the Camels this season in many statistical categories, including scoring at 12.4 points per game, offensive rebounds (44) and steals (32).

“She’ll get to the rim no matter what. She’s so quick off the dribble,” junior teammate Liv Castellanos said. “I’ve played with her since the second grade, so me and her have this constant, I-know-where-she-is, she-knows-where-I-am kind of thing.”

Milliron and Castellanos have had to step into leadership roles most teams fill with seniors. They have game experience from last season, and two other usual starting seniors — Ali West and Breckyn Percifield — are out hurt.

Milliron also leads the team in fouls, which can make for difficulty down the stretch in games.

With the absence of injured upperclassmen, underclassmen Maddie Jacobson and Madison Robertson have been a couple of important pieces on the team this season.

Jacobson, at 6-foot-1, leads the state in blocked shots and is on the leaderboard in rebounding. Robertson, a freshman, has a knack for shooting the 3-pointer. She hit six 3-point buckets in a single game over the weekend.

Roll with the punches

In the season opener against Scottsbluff, South Dakota, Castellanos led the Camels with an 18-point game to start with a win.

Coach Mitch Holst said he has been harder on Castellanos than maybe any player he’s ever coached, and it’s because he sees how good she wants to be and her potential.

“At first, I took it kind of personal that he didn’t like me. But then I learned that he just wants me to get better and he knows how good I want to be,” Castellanos said. “I may get really upset with him, and vice-versa, but in the long run it’s really helpful.”

Castellanos is the second-leading scorer on the team averaging 9.5 points per game, and she leads the Camels with 2.4 assists per game.

But Holst said she has more potential.

“She’s still a work in progress. I think she would tell you that. But I feel like how she played Friday night against Laramie, it just gives you so much hope,” Holst said about her 17-point game. “She’s got great potential. Her ceiling’s high. We need her. We really need her, and I think she knows that.”

While Central has a more spread-out scoring attack with four players averaging more than eight points a game, East is led by one of the most dominant players in Wyoming in Ky Buell.

Buell leads the state averaging 22.1 points per game and she also dishes out 4.5 assists a game.

“She’s a tough cover because she can get to the rim, shoot the 3, get free throws,” Holst said about Buell. “I feel like she’s going to get hers against anybody. You just limit the ease of her shots.”

Campbell County lost to East 46-31 in their only game this season. Central is the only Wyoming high school team to beat East this season.

The Campbell County boys basketball team also won a pair of games last weekend to get back to .500 on the season at 8-8.

They have one of their greatest in-state regular season challenges against No. 2 Cheyenne East (13-4) on Friday before playing No. 1 Cheyenne Central (14-1) on Saturday.

“They got a lot of talent. Cheyenne’s always had a lot of talented kids, athletic kids. No different this year, but probably just magnified,” coach Bubba Hladky said. “Our kids are ready to go. I feel like if we come out and do what we want to do, we should have two good ball games this week.”

East is led by 6-foot-5 Xavier McCord, who averages 17.3 points per game. The Thunderbirds also have point guard Graedyn Buell and Chance Aumiller, who were the state’s top quarterback-wide receiver duo in the fall and average double-digit scoring on the basketball court.

Central has the top recruit in the state with 6-foot-11 University of Colorado commit Lawson Lovering. It also has the 6-foot-5 Storebo twins — forwards Brady and Brock — who can score and rebound down low.

“They’re bigger, so the one advantage of that is that they’re not as quick,” Camel junior Luke Hladky said about playing taller teams. “If we move it, we’ll be able to get easy shots.”

A junk yard dog, or JYD, is a term that Campbell County assistant coach Mark Miessler uses, meaning a tough, scrappy, tenacious player who can get the job done.

The Camels have a couple of top JYD candidates in juniors Tanner Lemm and Austin Robertson.

Lemm was hurt with a foot injury and didn’t practice Wednesday, but he said that he’d be back for the weekend series.

Though Lemm stands about 6 feet tall, he leads the team in rebounding (4.5 a game) and has to sometimes cover players who are a half-foot taller.

Robertson doesn’t get all of the attention on the team, but when top scorers Luke Hladky and Jefferson Neary can’t get their shots to drop or find an open shot, he picks up the load.

In a win over Laramie last week, Robertson led the Camels with 17 points.

His shooting accuracy was a little off to start the season, however, and out of the top 10 scoring players in the state, he ranks second to last in field goal percentage at 37%.

He said his shot has improved since the conference schedule started.

“I’m not too concerned about all that. I’m just focused on winning, getting my teammates good shots and trying to get to the state tournament,” he said.

When Luke Hladky gets on a roll, though, it’s hard to stop him, and he has the top scoring game of any player in the state this season at 39 points in an out-of-state tournament game against Xaverian High School of New York.

Neary is the second-leading scorer on the team with 11.6 points per game.

“It’s tough when you’re getting face guarded. Me and (Neary) didn’t really experience that too much last year,” Luke Hladky said about the new defensive attention on Neary and himself. “We’re finding ways to get our teammates shots as the year goes on. When they face guard us, it opens up different things for our teammates.”