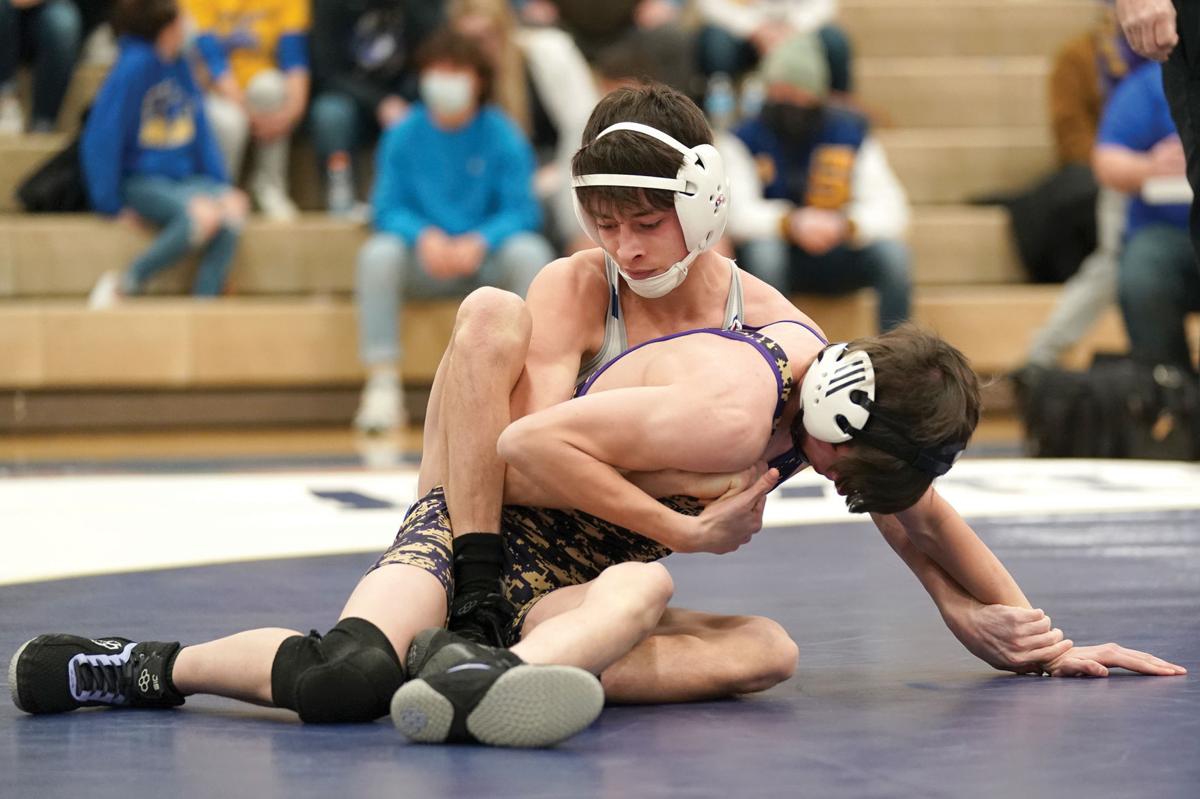 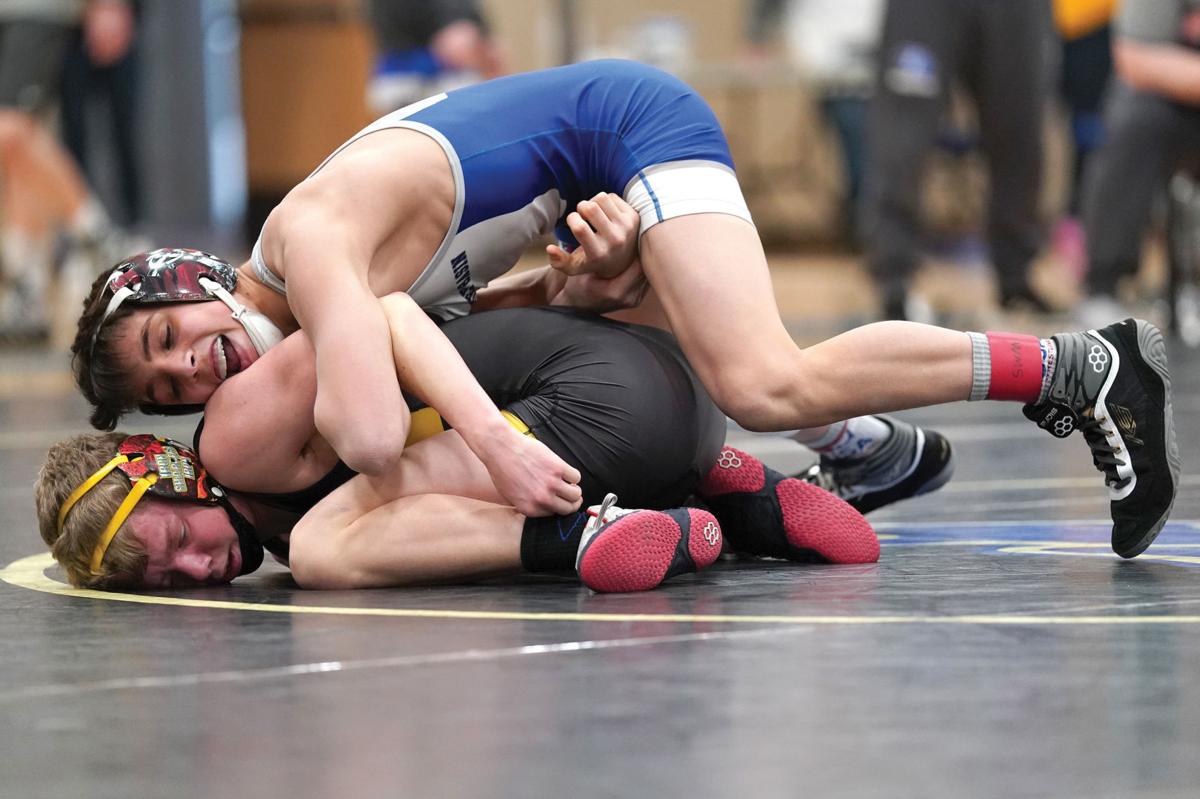 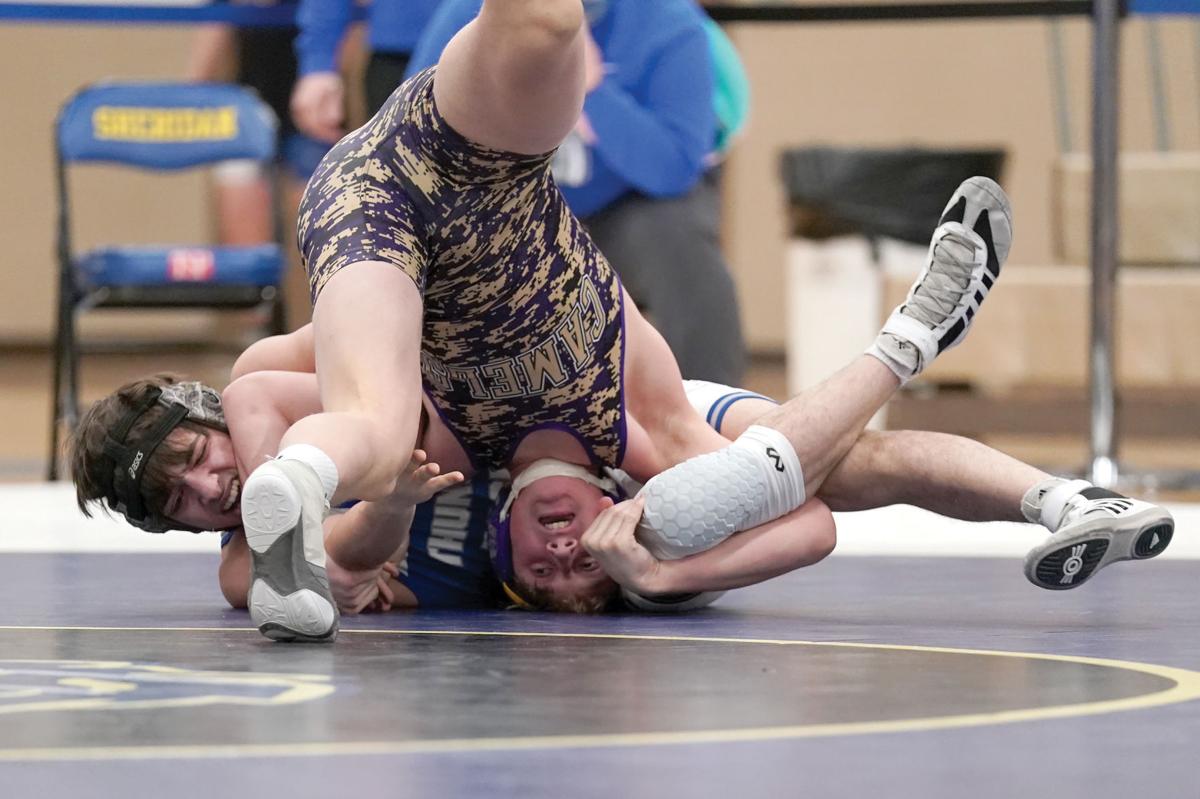 Campbell County’s Logan Ketterling tries to manuever his opponent, Thunder Basin’s Evan Mai, into position for a cradle Friday during a 160-pound matchup in Sheridan.

One last week of practice and four matches stand between wrestlers and the Wyoming prep state championships.

A total of 33 wrestlers will represent Gillette in Casper on Saturday, and all 33 will go in with the potential to be crowned the best wrestler in Class 4A in their respective weight classes.

The Thunder Basin High School wrestling team placed second at the 4A Northeast Quadrant Qualifier Regional Tournament this past weekend in Sheridan, qualifying 19 wrestlers for the state tournament. The Campbell County wrestling team was third and qualified 14 wrestlers.

Now with the regional tournament behind them, both teams shift their focus to peaking in their final action this weekend.

Having the tournament Saturday only because of COVID-19 protocols gives teams an opportunity to make some last-second adjustments going into state, said TBHS coach Mikah Kadera.

“You can get a lot better in a week span, and that’s what we’ve talked to the guys about,” Kadera said, adding that under normal conditions, state is a three-day affair. “You can make big strides in a week’s span and that’s what we’re focused on doing, not just with one guy, but with all 19 guys we qualified.”

Practice this week at Campbell County will be a lot more technical than intense, said CCHS coach Clay Rodgers.

“We’ll try to keep our conditioning up and work on our technique, but it’s not going to be 2-hour-long, grind-them-out practices,” Rodgers said. “It’s going to be short and sweet. Get in there with high tempo and get a lot of reps in different positions and different situations.”

A big difference for all the teams involved in this year’s tournament is the new one-day format. In an effort to limit the potential exposure to the virus, all matches are Saturday.

The ripple effect of the one-day tournament will cause conditioning to become a large factor for all weight classes, Kadera said.

“We’ve been maxed out at three matches a day, so that’s the most that anybody has wrestled,” Kadera said. “If you get to the finals and want to win that state championship match, that will be match No. 4, but if you lose a match and have to wrestle back to placing, you can wrestled four or five or possibly six matches.

“It’s just going to be about being in good shape, and I think our shape is pretty good, but we’ll keep improving on that this week.”

While Thunder Basin lost its only individual champ from last year to graduation, the Bolts return six state placers and four seniors who are four-year varsity wrestlers.

Going into state, Lane Catlin has a perfect 35-0 record at 220 pounds.

Joining last year’s state-placers for the Bolts will be 13 others ready to work their way through the brackets in their respective weight classes.

Kadera is telling wrestlers who have been there before and those who haven't that Saturday is just another tournament. While the program’s first team state title is the ultimate goal, Kadera wants his athletes to enjoy the experience as well.

“They need to come and wrestle hard and wrestle to the best of their ability and stick to what’s been working all year,” Kadera said. “The adjustments that we make, we have to make sure we use those in the matches that we need to and just keep getting better.

“The guys just have to go out there and wrestle and have fun like they have all year long and just continue to motivate each other.”

As a team, Thunder Basin is ranked No. 3 in Class 4A behind Natrona County (No. 2) and Sheridan (No. 1) on wyowrestling.com.

Campbell County will return state placers Colt Welsh (second at 106 pounds) and Colter Rankin (third at 285) from its 10th place finish as a team at last year’s state tournament.

After the regional tournament in Sheridan, Rodgers said he was “pretty darn happy” with his team’s performance. Having only qualified 12 wrestlers for state last year, 14 this season gives the Camels a better chance of placing better as a team.

“The ultimate thing is to win, whether it’s a dual or a tournament. You have to win to score points.”

The most important thing for the Camels on Saturday will be to stay warm and fresh in between matches, Rodgers said. In a typical tournament, wrestlers would have several hours between matches to rest and relax, but the new one-day format means wrestlers will be competing almost consecutively.

Rodgers said his team’s ability to recover from those tough matches early on will determine how high Campbell County ends up in the standings.

“If you lose in the semis or early on in the tournament, your personal goal of being a state champion is gone,” Rodgers said. “How important is the team to you to come back and fight and grind and get some wins and score some more team points?”

The Class 4A State Wrestling Championships begins at 8:30 a.m. Saturday at the Casper Events Center.

Sheridan led the way in team scores with 241 points, followed closely behind by Thunder Basin's score of 239.5. The Camels finished with a score of 125.

The Bolts won seven of the 14 weight classes and qualified 19 wrestlers for the state tournament next weekend. Senior Colter Rankin was the only first-place finisher for Campbell County at 285 pounds but 14 Camels were able to clinch a spot in the state tournament.

For Campbell County, Rankin's first place finish came after a 3-2 win by decision over Sheridan's Justin Vela at 285 pounds. The Camels also took second at 113 pounds with Provost's loss to Avila in the championship match.

The Bolts took second place in six weight classes, including Parker Lee at 126 pounds, Jais Rose at 132, Dylan Catlin at 138, Deyton Johnson at 160, Aden Jorgensen at 170 and Aidyn Mitchell at 182.

Thunder Basin had three more wrestlers finish in third place, including Blaize Burrow at 106 pounds, Garrett Toohey at 170 and Dylan Skillings at 285.

With the top-4 wrestlers out of each weight class qualifying for the state tournament, the Camels had seven more earn their spots with fourth place finishes at the regional tournament. Colt Welsh (113 pounds), Blake Harding (138), Tyson Stephens (145), Chris Boardman (152), Logan Ketterling (160), Cohen Granzer (182) and Jack Tinnell (195) all took fourth place.

Three wrestlers finished in fourth place for Thunder Basin, including Grady Edwards at 106 pounds, Zabian Cowley at 132 and Kavontae Montgomery at 285.

The Panthers, who are ranked No. 1 in Class 2A on wyowrestling.com, won the tournament with a team score of 181. Behind Wright was Moorcroft with 149, Tongue River with 135, Hulett with 118 and Sundance with 41.

The Panthers have 10 wrestlers ranked in the top-7 of their respective weight, according to wyowrestling.com.

Baker, Mack and junior Charlee Thomson (182) are ranked No. 2 while seniors Tyzer Isenberger (132) and Tescher are both ranked third.

Knight, Garrett and Smith are ranked No. 5 in their weight classes while senior Jacob Goodrich (160) is ranked No. 6 and junior Ethan Mack (heavyweight) is No. 7.

The 2A state tournament will be Thursday at the Casper Events Center.