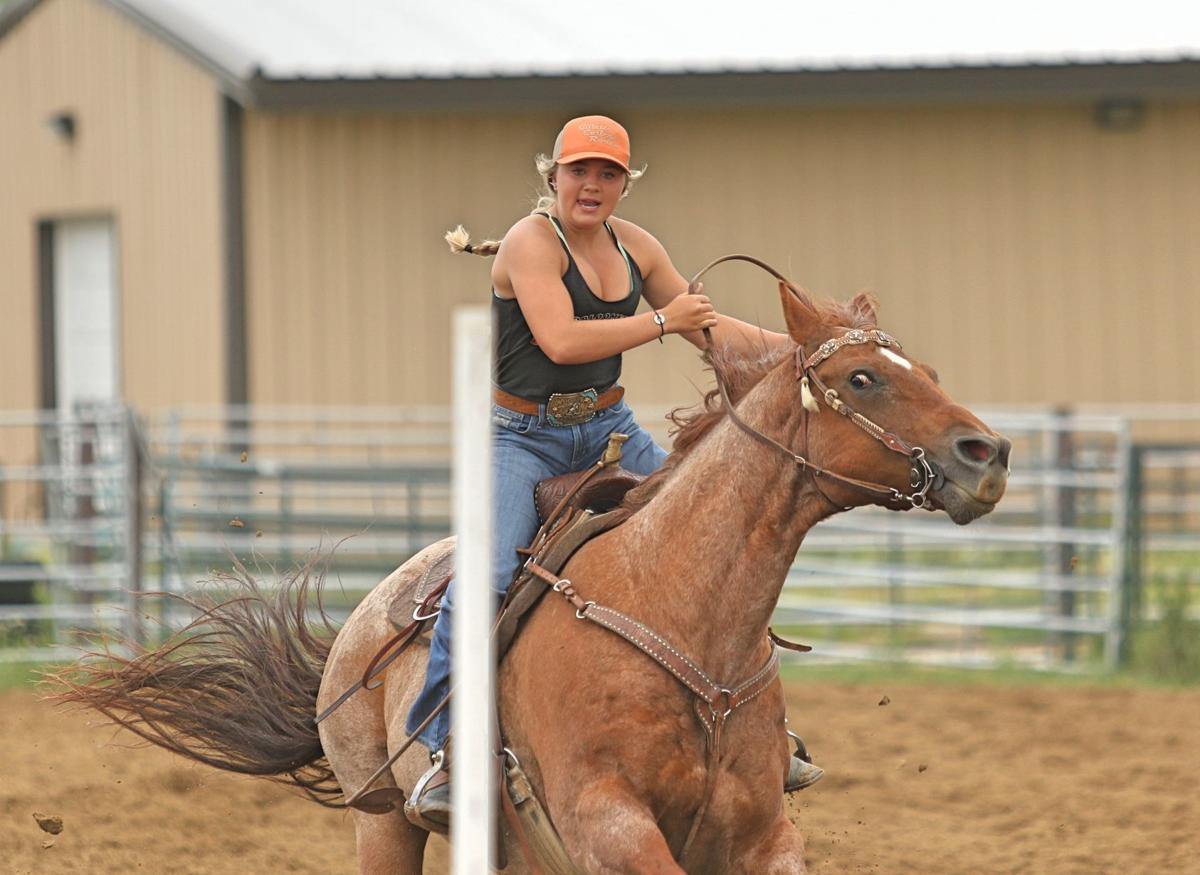 Halle Hladky, a junior qualified for the National High School Finals Rodeo, pushes her 20-year-old horse Hawk during a practice on July 1. 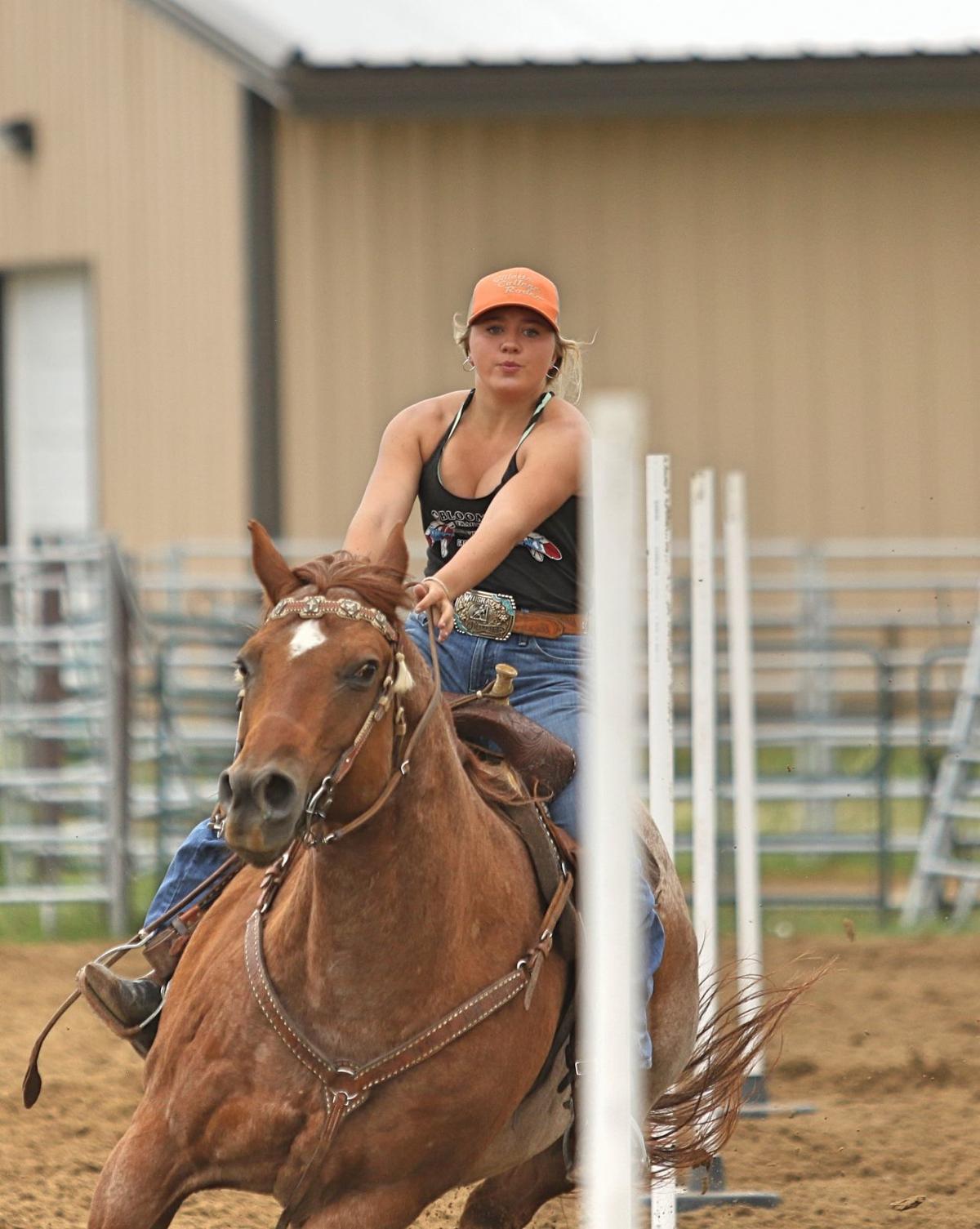 Halle Hladky, a junior who qualified for the National High School Finals Rodeo, pushes her 20-year-old horse Hawk during a practice on July 1.

Halle Hladky, a junior qualified for the National High School Finals Rodeo, pushes her 20-year-old horse Hawk during a practice on July 1.

Halle Hladky, a junior who qualified for the National High School Finals Rodeo, pushes her 20-year-old horse Hawk during a practice on July 1.

When you hear the name Hladky in Gillette circles, many think basketball, construction or large-scale oilfield work.

But Halle Hladky has always wanted to make a name for herself in a different arena — the rodeo arena.

Halle, a pole bending qualifier for the 2020 National High School Finals Rodeo, joined her sister and many of her cousins as they spent their youths on the basketball court. But her true passion is riding horses and she was constantly trying to convince her parents, Jean and Patrick Hladky, to let her rodeo.

After years of persuasion, Halle’s parents finally gave her the go-ahead in third grade to chase her passion.

She rode a friend’s horses to start and it didn’t take long to find success. Halle, who is about to be a senior at Campbell County High School, remembers winning money at her first rodeo in Belle Fourche, South Dakota.

Halle is a descendant of James Hladky, while the main basketball bloodlines in Gillette come from Mike Hladky’s side of the family. She also plays basketball at CCHS, but her mother Jean said she’s “all rodeo, that girl.”

“They expect me to play basketball over rodeo,” Halle said about the other side of the Hladky family. “But I like rodeo a lot better. It’s held to a different standard than basketball in our family, but they’re still very supportive.”

Neither of Halle’s parents rodeoed. In fact, the only family member who did was her grandmother’s cousin.

But she became hooked on it, just as many of the Hladkys have grown to love the hardwood of a basketball court.

Both sports require teamwork, but Halle prefers the type that’s needed for rodeo. While basketball has five players relying on each other at all times, rodeo is more of a partnership between athlete and animal, and Halle wouldn’t have it any other way.

The bond between Halle and her horses is “definitely” her favorite part of the sport, she said. She’d much rather put her trust in a 1,500-pound, well-muscled animal than four other teenage girls.

Halle knows and appreciates just how powerful horses are, but the idea that they are unpredictable or dangerous isn’t part of her thought process.

“They’re just like big dogs,” Halle said with a laugh. “People think they’re big scary animals and don’t know how you get on them. But they’re trustworthy. Sometimes they don’t trust you and that’s the problem.”

Halle, who is going into nationals ranked as Wyoming’s No. 2 pole bender, has been on many horses since starting her rodeo career in third grade.

But the one she rides now is her favorite. His name is Hawk and he’s the oldest horse Halle has ever competed with.

After an injury ended the career of her previous pole bending horse, Halle and her family decided to pull Hawk out of the pasture and give him a try. He previously competed in poles with Cinnamon Smith, a longtime local rodeo contestant, and Halle fell in love with Hawk’s gentle nature.

“I’m really close with this one. He’s probably my favorite one, but don’t tell the others,” Halle said. “He’s at his peak, he’s feeling good and has a lot more energy than ever before.”

Hawk was 17 and had been retired for several years when Halle pulled him out of the pasture, so she didn’t expect him to be a great competition horse. But it was like bringing back an aged all-star who retired a little too early.

Now 20, Hawk is about to compete with Halle at their second straight National High School Finals Rodeo. She narrowly missed out on qualifying as a freshman.

In the three years of competing together, Halle has learned Hawk’s personality traits and his quarks. She said he is typically a lazy, laid-back horse who is generally easy to handle and be around.

When it comes to food, Hawk is far from a picky eater and has a particular taste for Pop Tarts. That’s his reward whenever he runs well, so Hawk has come to expect the tasty breakfast treat after he and Halle make a good run.

“It’s rewarding having a horse you can work together with and do good,” Halle said.

Preparing for the big show

Being in contention at the NHSFR is an accomplishment itself, but it’s easy to come up just short and go home heartbroken.

With more than 1,800 contestants and about 200 in some events during typical years, the NHSFR has been termed as the largest outdoor rodeo in the world. Only the top 20 qualify for the short go, which usually requires two near-perfect runs.

The short go is where the national champions are crowned and it only takes one small mistake to miss out on it. That’s what Halle experienced last year.

After getting into the top 20 after her first performance, the initial time that appeared on the big screen in Rock Springs was the fastest of the entire second go. But she had knocked over a single pole, which added five crucial seconds to her time and caused her to miss the short go.

“It was a heart-wrencher,” Jean Hladky said about her daughter getting so close.

Coming up short is often one of the biggest motivators and teachers for high school athletes. Halle hopes she learned her lesson as she prepares for this year’s trip to nationals in Guthrie, Oklahoma.

If a rodeo a few weeks ago in Belle Fourche was any indication, Halle and Hawk are running better than ever. They posted a time of 19.97 seconds, a new personal best.

That time is plenty fast enough to make some noise at nationals, which Halle said “feels good just to know you could be in there.”

But after last year, she is more focused on the mental side of the competition.

Nerves and trying to be picture perfect have been issues in past years for her and hundreds of other contestants. Halle said if you go into a run trying not to knock down a pole, you’ll knock down a pole. She’s trying her best to scrap that mindset.

“Don’t overthink, just treat it like a regular rodeo,” Halle said. Otherwise, “I’ll get in my head and I’ll try not to tip or I’ll try to make a fast run when I know my horse can do it and I know I can do it.

“I just have to remember I’m in there if I make a good run.”

Halle added that when she’s nervous or maybe shaking a little in her stirrups, her horse will feel it and react.

It took her a long time to be able to stay calm right before a run, but now she and Hawk walk into big events like it’s her home arena — a place she has always used as an escape.

She may be the only rodeo athlete in a prominent Gillette basketball family, but now Halle Hladky is ready to compete for something few Hladkys ever have — a national championship.