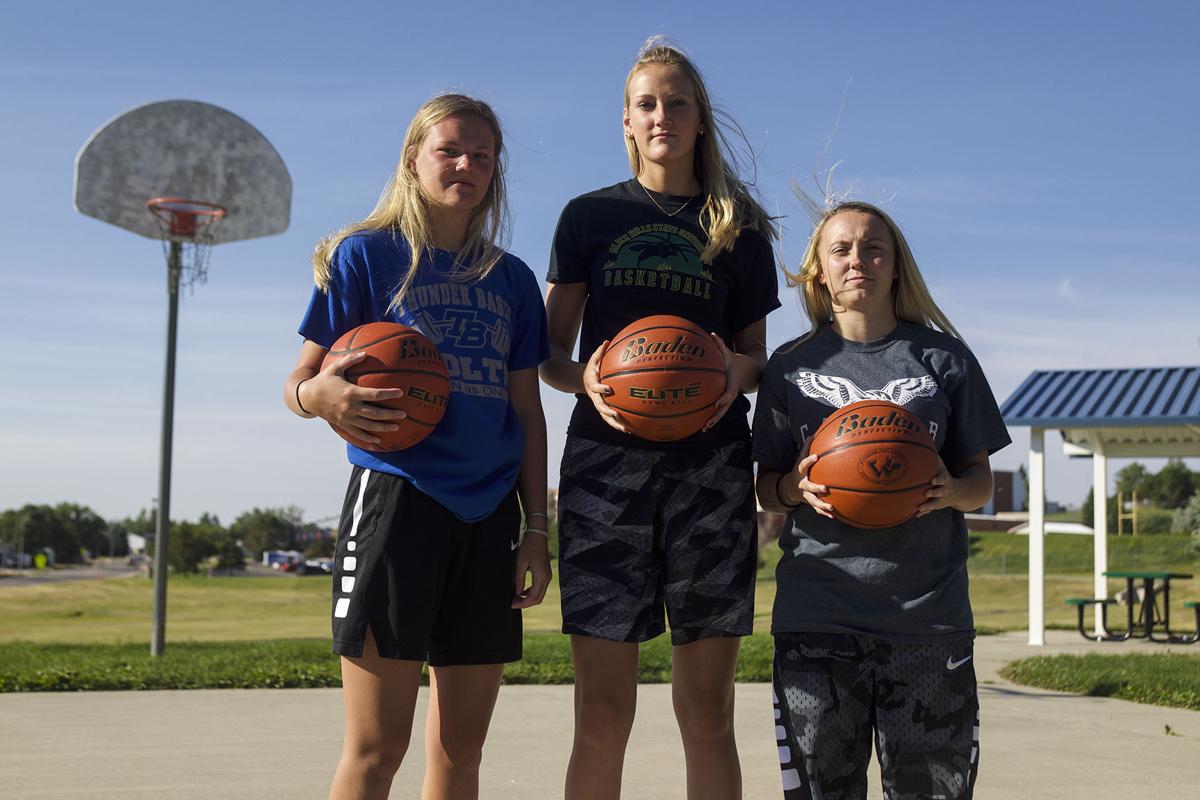 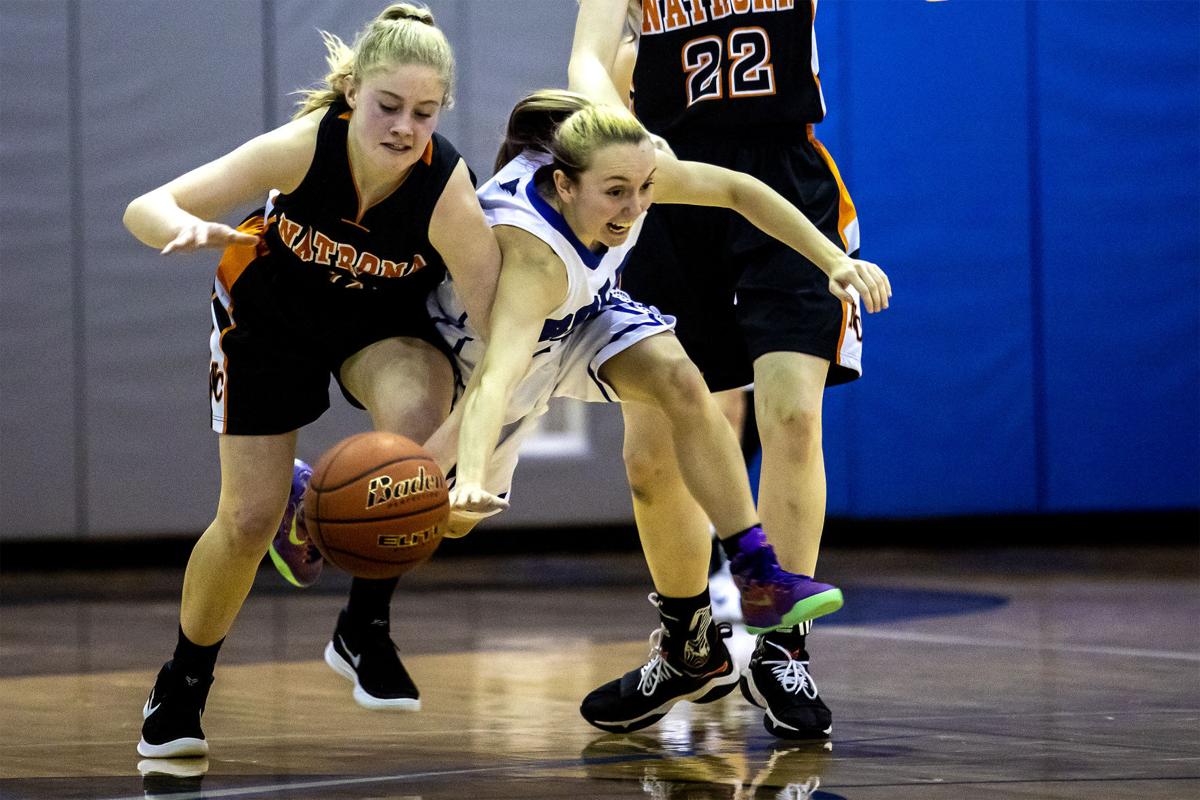 The Bolts’ Meadow Kuntz dives in for a steal against Casper-Natrona last season. She will be playing basketball at Casper College during the upcoming season. 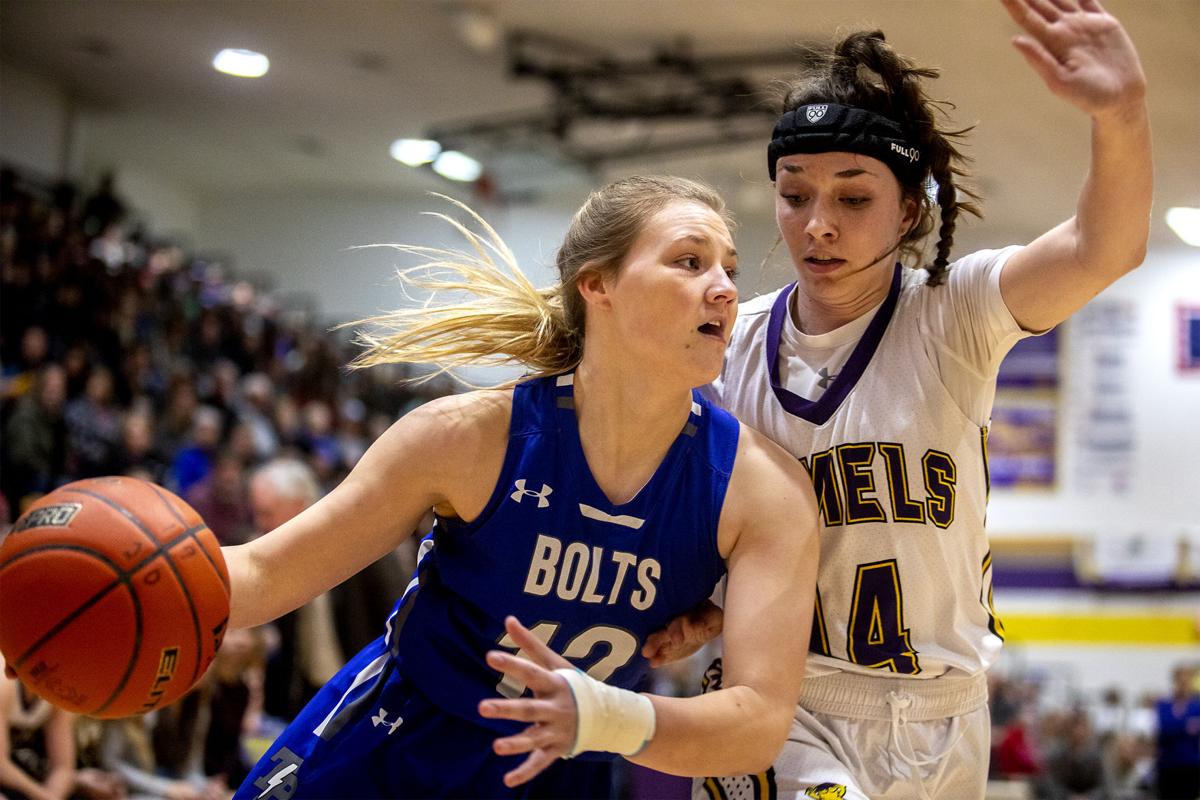 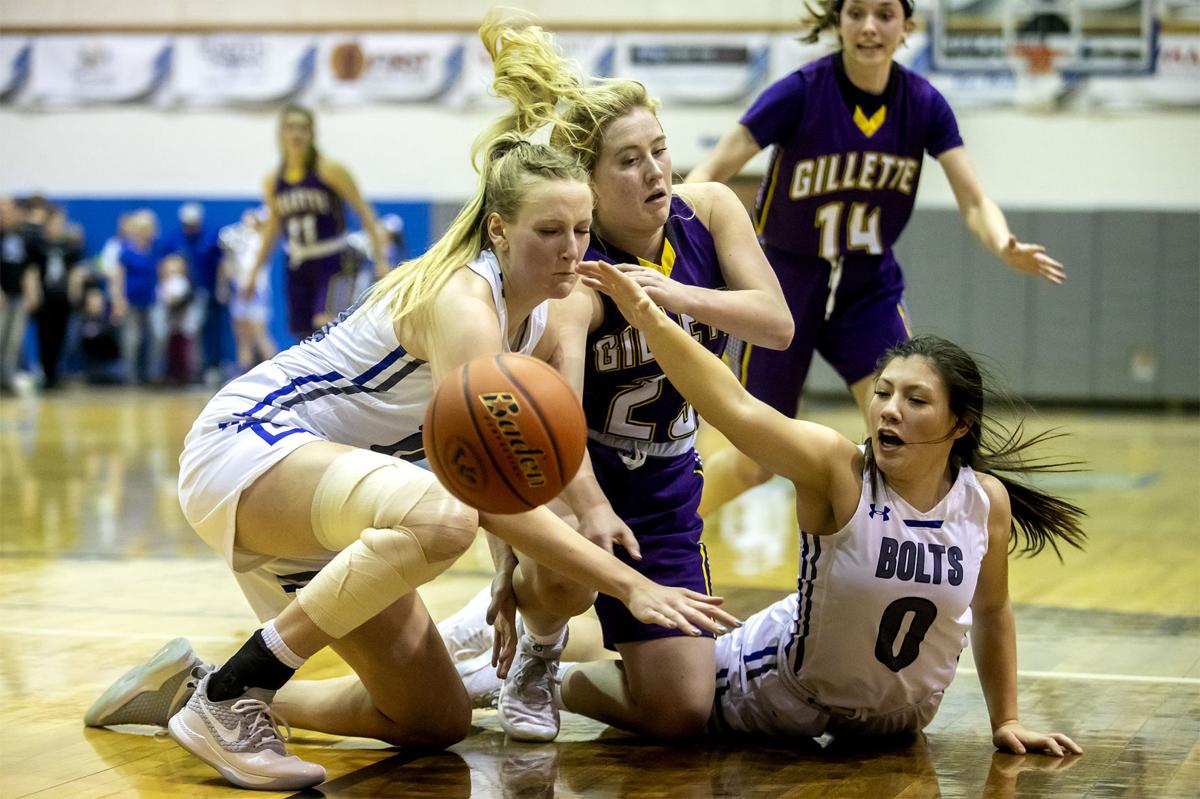 The Bolts’ Molly Strub, left, and Brady Diemling compete with the Campbell County’s Lauren Lacey for a loose ball in Thursday’s game. Strub will be playing basketball at Black Hills State University during the upcoming season.

The Bolts’ Meadow Kuntz dives in for a steal against Casper-Natrona last season. She will be playing basketball at Casper College during the upcoming season.

The Bolts’ Molly Strub, left, and Brady Diemling compete with the Campbell County’s Lauren Lacey for a loose ball in Thursday’s game. Strub will be playing basketball at Black Hills State University during the upcoming season.

Taylor and Kuntz started playing basketball together in the first grade. Strub joined them in third grade to form a trio that would excel on the court for the next 10 years.

The connection between Strub, Taylor and Kuntz was immediate and the transition to games was almost seamless, Kuntz said. The tall, long frame of Strub gave their teams a strong post presence and even provided a few laughs along the way.

During one of their early games playing together, Kuntz said Strub was “blocking everything” the opposing team threw up. Kuntz nicknamed her “the fly swatter” after the game, which stuck for a while.

Off the court, the bond between Kuntz and Taylor was as strong as it could be for first- and second-grade girls. And when Strub joined, the relationship just expanded and the three started to become more than just teammates and friends.

The girls played together on a traveling basketball team from third grade on, coached by Taylor’s father, Jason. Then they all attended and played for Sage Valley Junior High School.

By the time they were sophomores in high school, they knew each others’ tendencies on the hardwood and their quarks off it. The trio already had seven years of experience together and was ready to make a difference for the Bolts.

“After playing so long together, in high school we just knew what the other person was doing,” Strub said. “Meadow was always really good at that. She just knows where we’re going to be and knows what we’re going to do.

“She’s a good point guard and knows how to get the ball to us.”

Strub, Taylor and Kuntz were important pieces for the Thunder Basin girls basketball team during their junior year. With the help of a few talented seniors ahead of them, the Bolts went on to win the first state title in program history in 2019.

A year later as seniors, the three were at the center of another state-contending Bolts team, which was ranked No. 1 in Class 4A for a good portion of the season.

Playing the final three games at the state tournament meant everything to the trio. It wanted to go out on a high note, but that opportunity was ripped away in early March when the Natrona County Department of Health decided to cancel the state tournament.

Now Taylor, Kuntz and Strub are preparing to pack their bags and join separate teams for the first time in a decade. Taylor will be going to Dickinson State College in North Dakota, Strub to Black Hills State University in Spearfish, South Dakota, and Kuntz to Casper College.

“It’s going to be different going to play with other girls, but it’s good to see that my own teammates made it just as far as I did,” Kuntz said. “We made it together. We’re going to different places, but we’ll always be a team in my eyes.”

Taylor was one of the many athletes caught up in the unexpected decision June 25 to cut the athletics programs at Sheridan and Gillette colleges.

But she knew she still wanted to play basketball and teams were pursuing her immediately after finding out she no longer had a spot at Sheridan College. Now she is headed to Dickinson State, which she thinks is an even better fit than Sheridan.

Taylor visited three schools during her second round of recruiting — Northwest Community College in Powell, Chadron State in Nebraska and Dickinson. There just wasn’t anything bad to say when she left Dicksinon after her visit, Taylor said.

She met one of her teammates, along with some of the coaching staff, and liked everything about the limited time on campus.

“After visiting Dickinson, I never said anything negative about it and there was nothing that I didn’t like,” Taylor said. “So I just stuck with gut feeling and chose Dickinson.”

Another big deciding factor was Dickinson’s “really good” nursing program, Taylor said. She planned to study general health science at Sheridan before switching to nursing when she transferred to a new school.

Now she can start with her nursing studies right when she gets to Dickinson, which gives her some solace about her original program being unexpectedly cut.

“I think this is a better opportunity than what I’d be doing in Sheridan anyway,” Taylor said. “I think it all just kind of worked out. Obviously, getting my education is more important than playing basketball the rest of my life.”

On the court, Dickinson has a group of seven seniors for the upcoming season, so Taylor said she’s “comfortable not playing a ton of minutes” as a freshman. She plans to use her first year to get used to the change of pace, but expects to get plenty of playing time after that.

Nobody had more to look forward to entering the 2019-20 basketball season than Kuntz. As a junior, she was the starting point guard for the state champion Bolts and was the team’s lone returning all-state player.

Former TBHS coach Braidi Lutgen said she was Thunder Basin’s best defender and possibly the best in the state as a junior. But shortly before the season, Kuntz suffered an ankle injury that didn’t allow a return until a few weeks before state.

When she did come back, she wasn’t able to recapture the lightning-fast speed and defensive presence from the year before. It was one of the worst experiences of her athletic career.

“It was rough,” Kuntz said. “It was honestly the worst thing that’s ever happened to me — to get back on the floor and not be able to move 100% like I used to be able to or turn or jump.”

However, Kuntz didn’t have to capture the attention of recruiters because she had signed with Casper College following her junior season. She had a couple of college options, but knew she wanted to be a Thunderbird.

Kuntz is planning on becoming a radiologist technician in the future. She said she wants to get her generals done in the first year, then get accepted into her desired medical program at Casper College.

Strub knew she was going to Black Hills State University before her senior year. It had been a dream school since she was 8 years old when her parents took her to a home game in Spearfish, South Dakota.

“I’ve always wanted to go to Black Hills to play basketball. That’s been my dream,” Strub said. “We went to a game when I was younger and I was like, ‘This is awesome, I want to play here.’”

Strub went to the BHSU basketball camp nearly every year in the years after going to her first Yellowjacket basketball game. That’s where she met coach BHSU coach Mark Nore as a sophomore and the two stayed in contact until she signed following her junior season.

“I’m really excited. I love coach Nore, he’s awesome,” Strub said. “(The players) told me that he’s such a good coach, but he’s also a good person. He cares about basketball, but he also cares about how you’re doing.”

Strub was treated to a private tour of campus and facilities by Julia Seamans, who played high school basketball in Gillette before going to Black Hills State. Strub met all of her teammates when she visited the Black Hills campus and said it was an “awesome environment.”

Strub also chose Black Hills State because of its high-level education program. She will study elementary education and wants to teach second or third grade when she’s done with school.

Having the luxury of being at each other’s sides won’t be an option next season when the three TBHS standouts head their separate ways.

All three have thought about the process and don’t look forward to being away from each other. But it’s the start of a new chapter, which they’re all ready for.

“It’s sad, but I think it’s good for all of us that we’re all going away and playing still,” Taylor said.

Many happy memories have been made on the court, but the ones off it have been just as cherished, Taylor said, adding a lot of the moments that stick out are spending time together and activities like riding scooters in Arizona.

Taylor, Kuntz and Strub got a taste of what it was like not seeing each other during quarantine, but they still stayed in touch. When the Sheridan College programs were cut, Taylor said both Strub and Kuntz quickly reached out to check on her, which meant a lot.

In a month, the trio that has rarely spent a moment on the court without each other will be in three different states. But the relationship they’ve forged is one for their lifetimes.

“It’s going to be different and sad. I’ve honestly thought about it a lot, just because college is coming up soon,” Strub said. “I’m excited to grow new relationships, but I’ll never forget the ones that I’ve made already.

“I’m sad I won’t be playing with them anymore, but I know they’ll both do great things.”