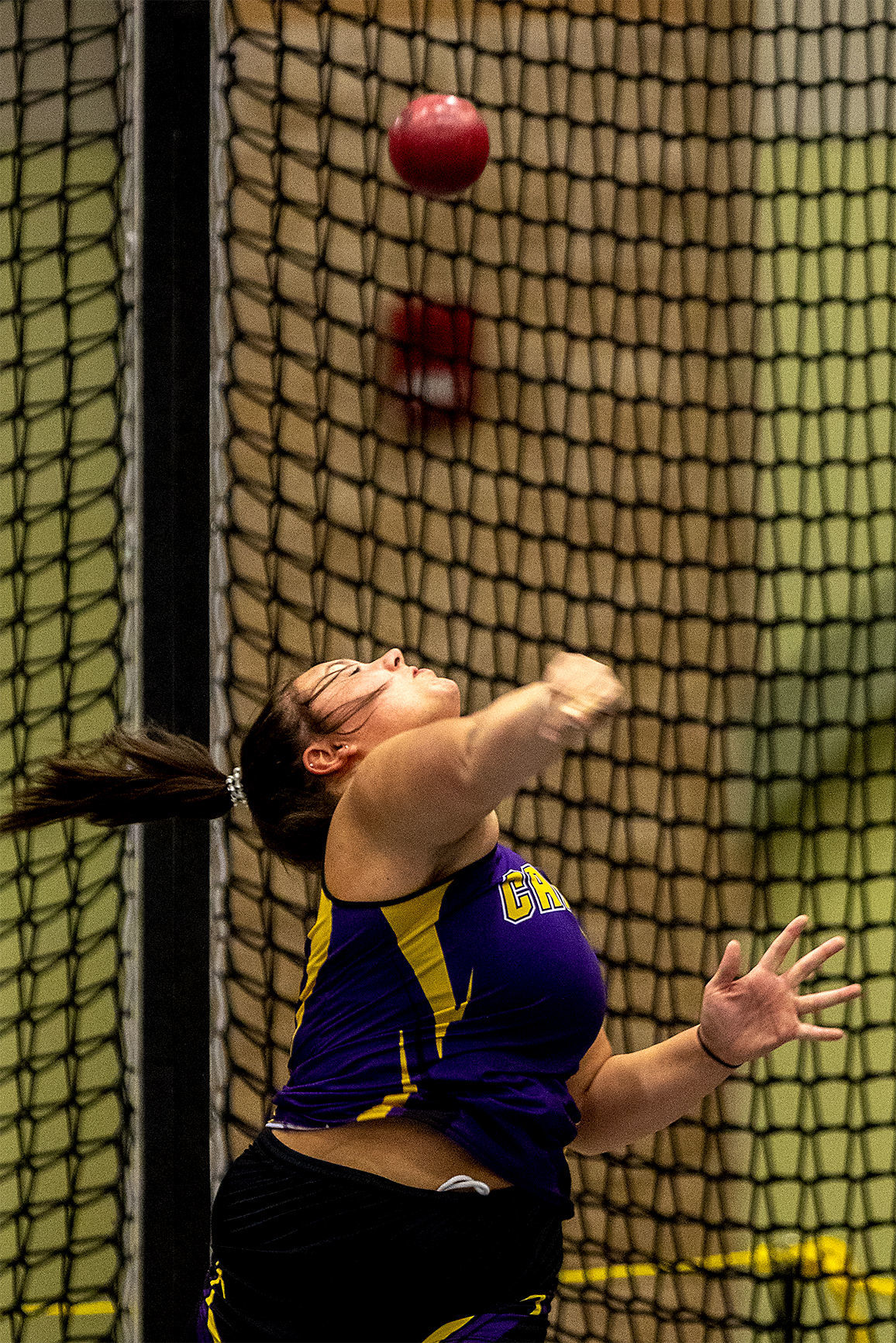 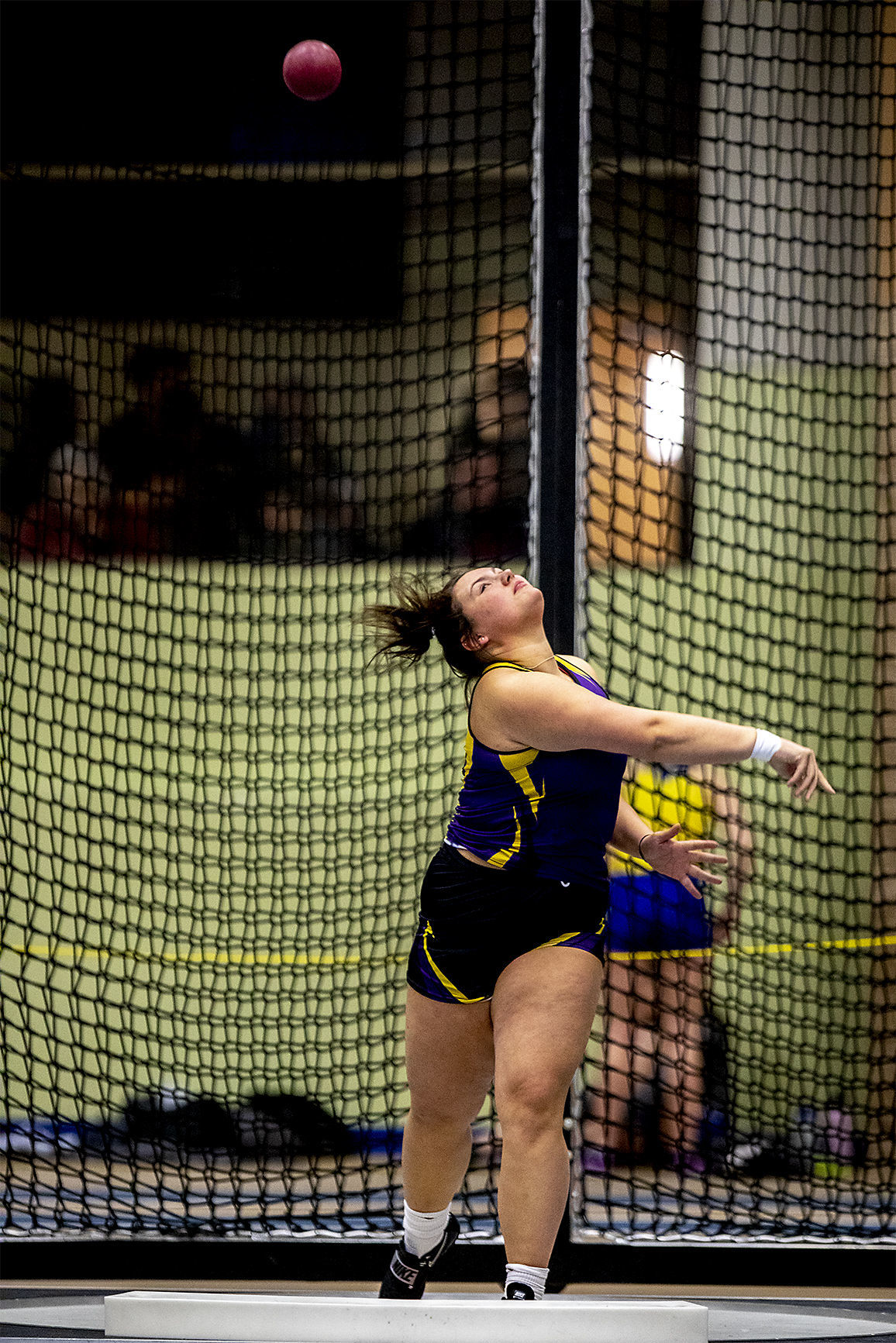 The Camels Lauryn Love throws her shot in the shot put competition on Friday at the Campbell County Recreation Center Field House.

The Camels Lauryn Love throws her shot in the shot put competition on Friday at the Campbell County Recreation Center Field House.

Love and her good friend Shaelynn Siebert were in a weight training class with indoor track coach Micah Christensen. Christensen saw that they were lifting a lot of weight, and he tried to get them to go out for the team.

“I asked them to come and give it a try, and they blew it off for the first week or so,” Christensen said.

Then Siebert’s mother texted her daughter something along the lines of: “I think you should go, but I don’t think Lauryn’s going to commit to it,” Siebert said.

Siebert showed Love the text, and it got her fired up.

Fast forward two years and Love is the No. 2 indoor shot putter in the state and she posted one of the highest finishes in years by a CCHS athlete at the Simplot Games, a large indoor meet that brings athletes from all over the world.

She finished second with a heave of 39 feet, 5.50 inches, the best finish by a CCHS individual athlete at Simplot since Paula Andrie won the pole vault in 2011. Her personal record indoor mark is 40-2.50, which puts her with some of the top throwers in school history.

Love is third in the school indoor record books behind Shantell Gladson and Elizabeth Maller. Maller set the CCHS indoor shot put record in 2014 with a put of 40-9.25.

“I didn’t ever think when I started track in ninth grade that I was going to be a good competitor,” Love said. “At my first meet, I wasn’t very serious about it. I threw, like, 27 feet, and my coach was like, ‘You need to warm up and actually try.’

“Once I realized I could be good at this, then I really kicked it into gear.”

Love and Siebert are volleyball players too, and that was Love’s No. 1 sport until she started marking some of the top throws in the state, attracting the attention of college track and field programs.

She said that she plans to throw in college and study pre-med.

“She’s so smart. It blows my mind. And she really dedicates herself to her school work,” Siebert said. “So, I knew that with her applying that same dedication to this sport, because her and I were just so technical and precise when it came to practicing, that I knew that she could do it.”

“We obviously want to do better than the other, but we’re also excited if the other succeeds,” Migneault said about their friendly rivalry. “I thought it was going to be first and second between us (at Simplot).

“I didn’t really know who was going to get that top spot because it’s always iffy. On her good day, she can definitely pop one out.”

In observing how Love throws, Migneault said that she could see her throwing a lot farther in the future if Love could change her launch angle a little higher.

With two weekends left in the indoor track and field season, Love has a limited time to tweak her form and find those extra inches. And she’ll need them when the Love vs. Migneault rivalry returns to the Campbell County Recreation Center.