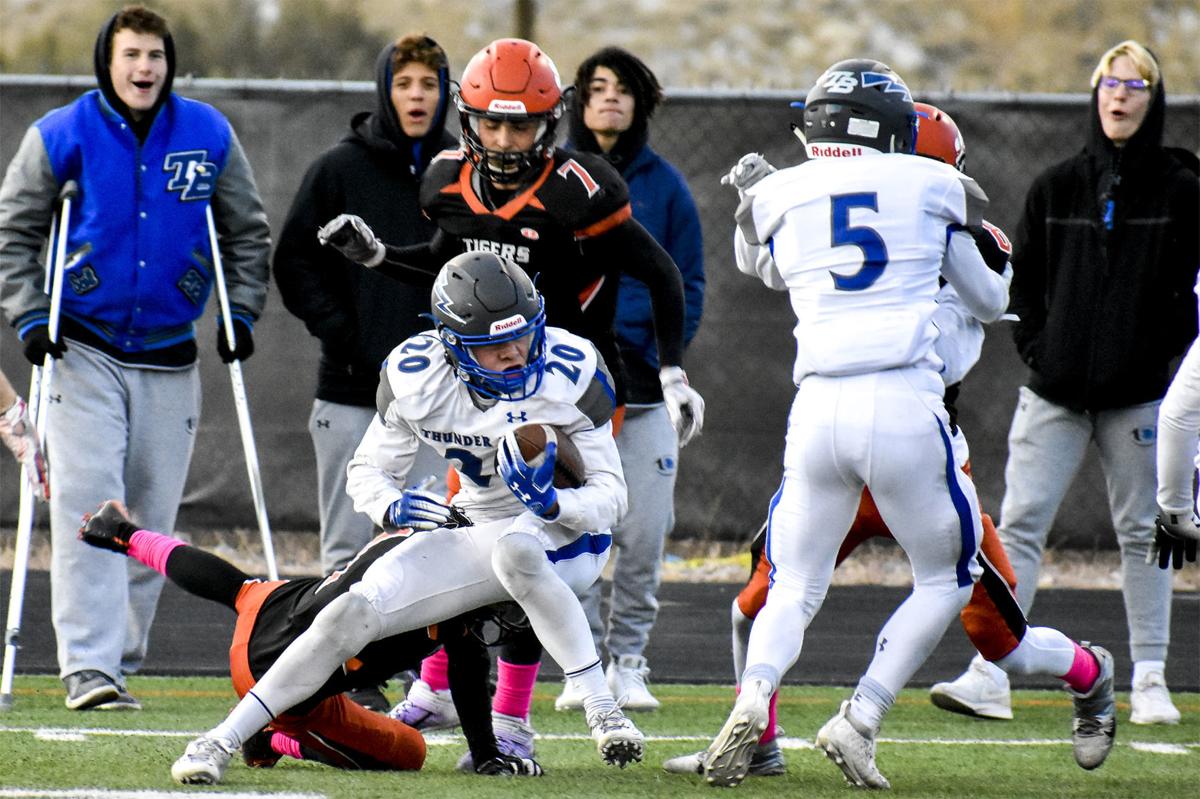 The Bolts’ Tanner Richards gets tackled near the sidelines in Friday’s game against Rock Springs. 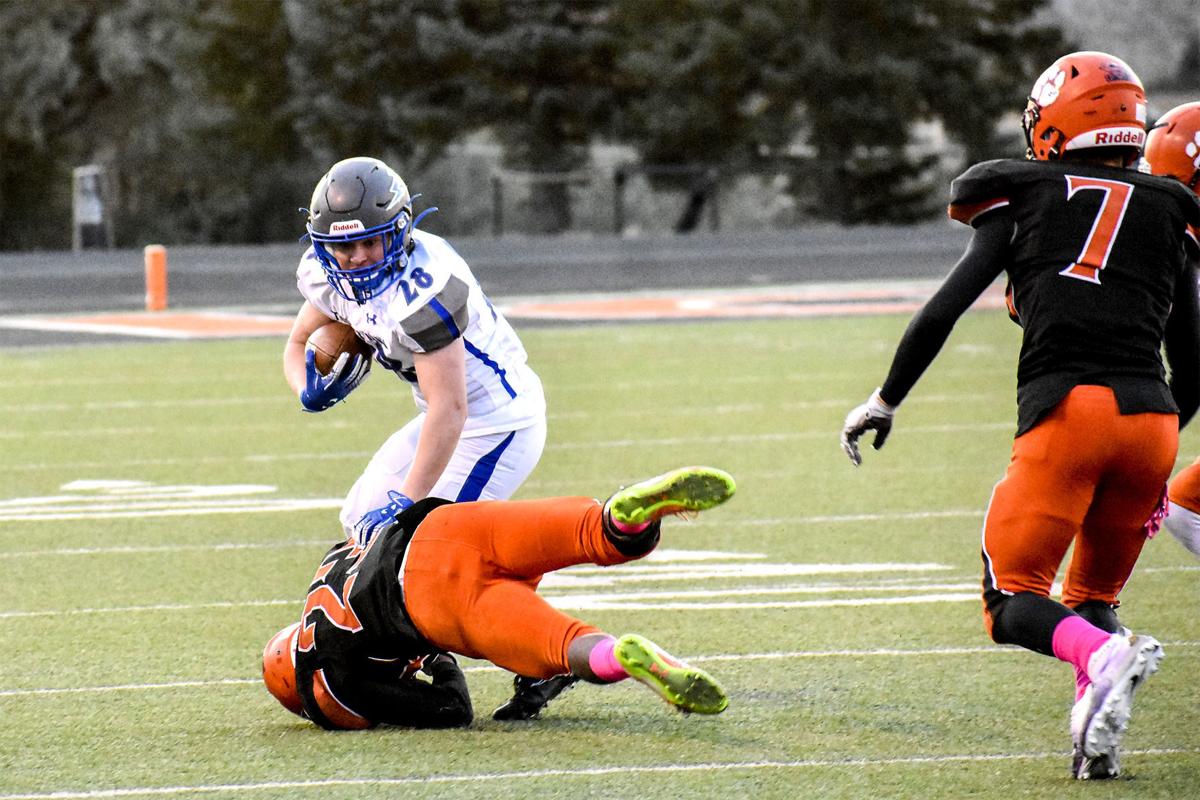 The Bolts' Jaxon Pikula avoids a tackle by Rock Springs in Friday's game. 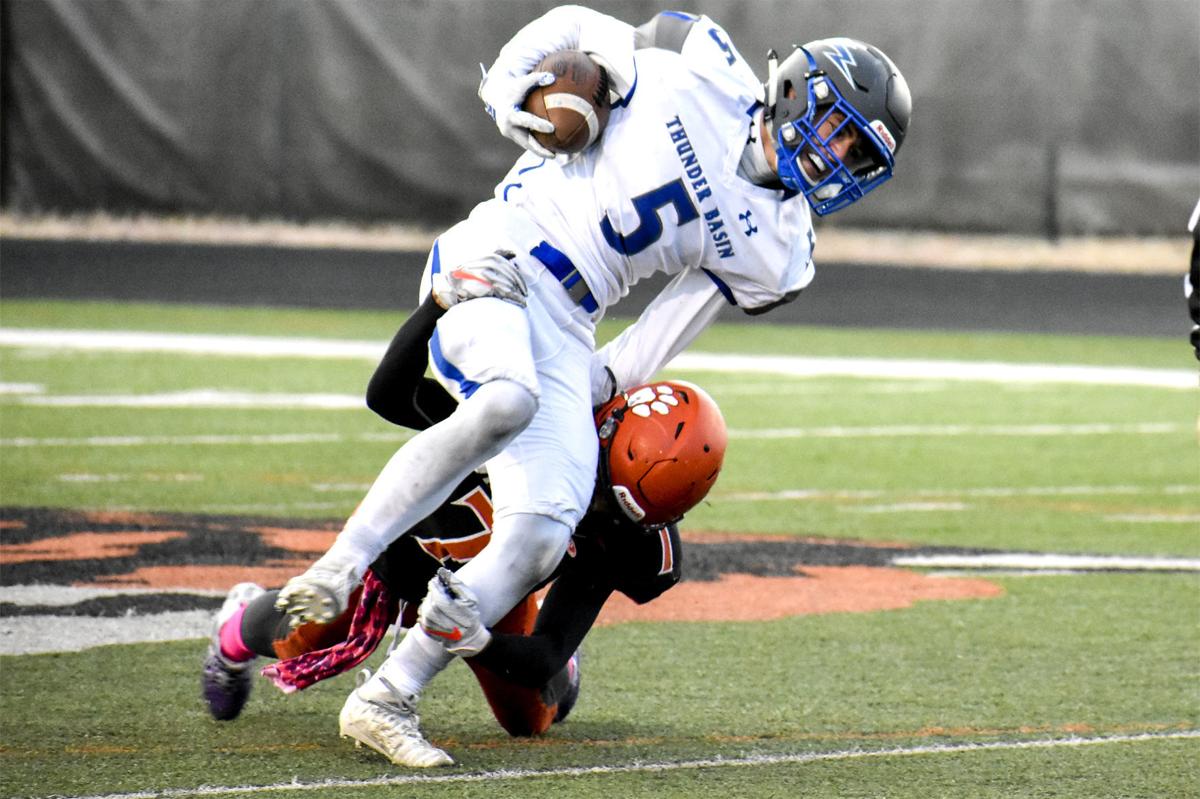 The Bolts’ Tanner Richards gets tackled near the sidelines in Friday’s game against Rock Springs.

The Bolts' Jaxon Pikula avoids a tackle by Rock Springs in Friday's game.

Next to nothing went right in the first half for a top-ranked Thunder Basin High School football team Friday that was hyper-focused on starting fast all week at practice.

For the second straight week, the Bolts found themselves with their backs against the wall on the road against Rock Springs’ top-ranked defense, which proved as good as advertised in the first half in putting TBHS in a 14-2 halftime hole.

The Bolts are no stranger to playing from behind, though, and came alive in the second half, eerily similar to a week before when they overcame a 16-point halftime deficit. Against Rock Springs, they scored 24 straight in the final half as the defense pitched another second-half shutout for a 24-14 comeback win.

“They’re a good football team, but we shot ourselves in the foot so many times (in the first half),” TBHS coach Trent Pikula said. “We have to be prepared to play two halves of football. Our guys believe in themselves. They never think they’re out of the game.”

The first chance for TBHS to carve into the Tigers’ lead came with about 8 minutes, 30 seconds left in the third quarter. Jaxon Pikula was held to 7 yards on seven carries in the first half, but after a steady diet of carries to start the second half, he busted to the outside for a 29-yard touchdown with 6:14 remaining in the third quarter.

That quickly cut the deficit to 14-9 and then Rock Springs further fed into the Bolts’ momentum on the first play of the ensuing drive. Quarterback Seth Hymas tried airing it out on first down, but the pass came down amid a group of TBHS defenders and Tanner Richards made an easy interception at midfield.

It looked like a holding penalty was going to stall Thunder Basin’s next possession, which was a theme throughout the first half. But a gutsy play call from the coach and even better execution gave the Bolts a chance to keep driving.

Fill-in punter Blaine Allen took the snap at Rock Springs’ 46-yard line, but instead of booting it, he took off and made it all the way to the 23. Four plays later, the Bolts were in the end zone and in the lead, as quarterback Mason Hamilton rolled out to the right and threw back to an open Cameron Durgin for the touchdown.

Pikula reached into his special teams bag of tricks again for the PAT. The holder, Richards, took the snap and hit Dyse Shepard in the end zone to extend Thunder Basin’s lead to 17-14 with 3:04 left in the third quarter.

The Tigers got the ball back just five minutes after holding a 14-2 lead and suddenly needed to put points on the board. However, the Thunder Basin second-half defense has been lights out this season and tackles from Allen and Hayden Lunberg, followed by an incomplete pass, forced a quick RSHS punt.

The Bolts went for the throat on the first play after the stop. Hamilton flashed some of his brilliance with a perfect throw down the seam and right into the arms of Richards for a 41-yard touchdown. The quick strike made it 24-14 with 1:11 left in the third.

“It was an incredible throw from Mason and I was just able to catch it and get in (the end zone),” Richards said.

Richards had a memorable game on both sides of the ball. Already with an interception and a receiving touchdown, he ended the next RSHS drive with a pass breakup and later made his second interception of the game, picking off Hymas in the end zone with 5:27 left in the game.

Thunder Basin’s defense only allowed one first down in the fourth quarter — a long ball to Justis Reese — and again gave the Bolts a chance to grind out a win.

“The defense held us in the game until our offense picked it up,” coach Pikula said. “We can’t keep putting them in positions where they have to win us the game.”

The first-half woes for TBHS were palpable, a constant game of one step forward, two steps back.

The main focus in practice leading up to the game was starting fast and putting a full four quarters of quality football together, but after two drives Friday night, it became apparent that wasn’t in the cards.

The inauspicious start began when the Bolts went three and out on the game’s first possession. Then Jaxon Pikula fumbled three plays into their second drive.

At the same time, Rock Springs did exactly what underdog teams need to — take advantage of golden opportunities. A bad punt on the first TBHS drive and the fumble on the second left the Tigers with just 31- and 34-yard drives. They punched both in for the 14-0 lead with 3:25 left in the first quarter.

Thunder Basin’s offense found a little rhythm after the giving up the two touchdowns, but like coach Pikula said, kept finding ways to shoot itself in the foot.

A 25-yard completion to Richards on third-and-15 was called back for a holding call on the third drive, eventually forcing a punt. On the fourth drive, a pair of drops in the red zone forced the Bolts to go for it on fourth. The effort failed.

The fifth drive ended after a pair of holding calls put the Bolts in a third-and-28 situation. They were moving the ball well on their sixth drive before Rock Springs’ Collin Madsen stripped Warren Carr at the 2-yard line, and then they ran out of time on their final possession before halftime.

“Once we buckle down and play football, we’re just fine. It’s just a matter of when we do that,” coach Pikula said. “We’ll take the win, but we can’t just be satisfied with wins. We have to keep getting better.”

The victory comes a week after Thunder Basin beat Natrona County 20-16 after falling behind 16-0 in the first half. With two games remaining in the regular season schedule, the 7-0 Bolts seem to be on pace to secure the No. 1 seed for the Class 4A playoffs.

The lone bright spot for TBHS in the first half came from defensive star Caleb Driskill. He busted through the line with eight minutes left in the second quarter, blocking a punt and causing the ball to roll through the back of the end zone for a safety.

Slow starts are beginning to become a trend this season, one the Bolts would dearly love to buck. However, the results at the end of the night have tallied the same whether it was a blowout or a come-from-behind win.

“I think we’d all like to start off better, but at the end of the day a win’s a win and we’re still undefeated,” Richards said. “Our goal is Nov. 16. Our team just keeps showing its perseverance.”

TBHS — Caleb Driskill blocked punt inside the 10-yard line for a safety (8:00)