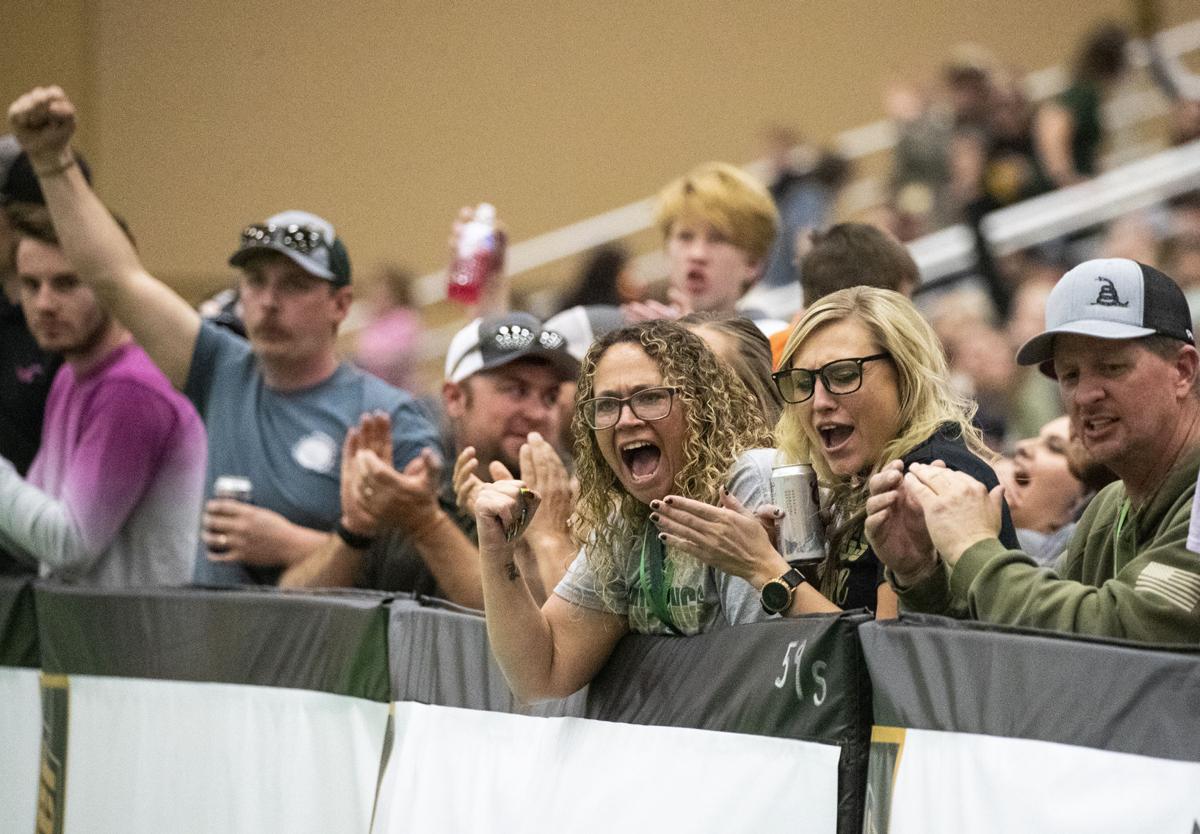 Fans celebrate after the Wyoming Mustangs complete a big pass near the end zone Saturday as they took on the Salina Liberty at Cam-plex. 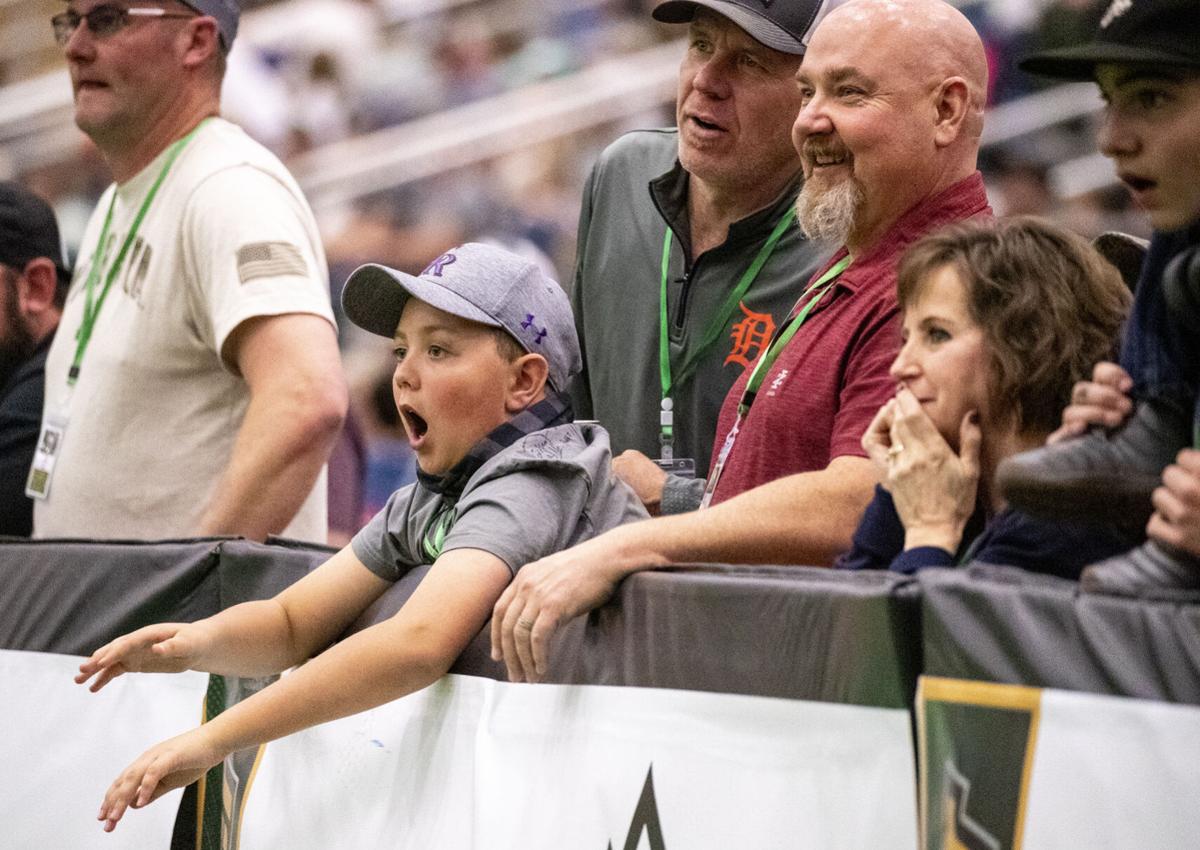 Fans call for an incomplete pass Saturday evening as the Mustangs played the Salina Liberty at home. 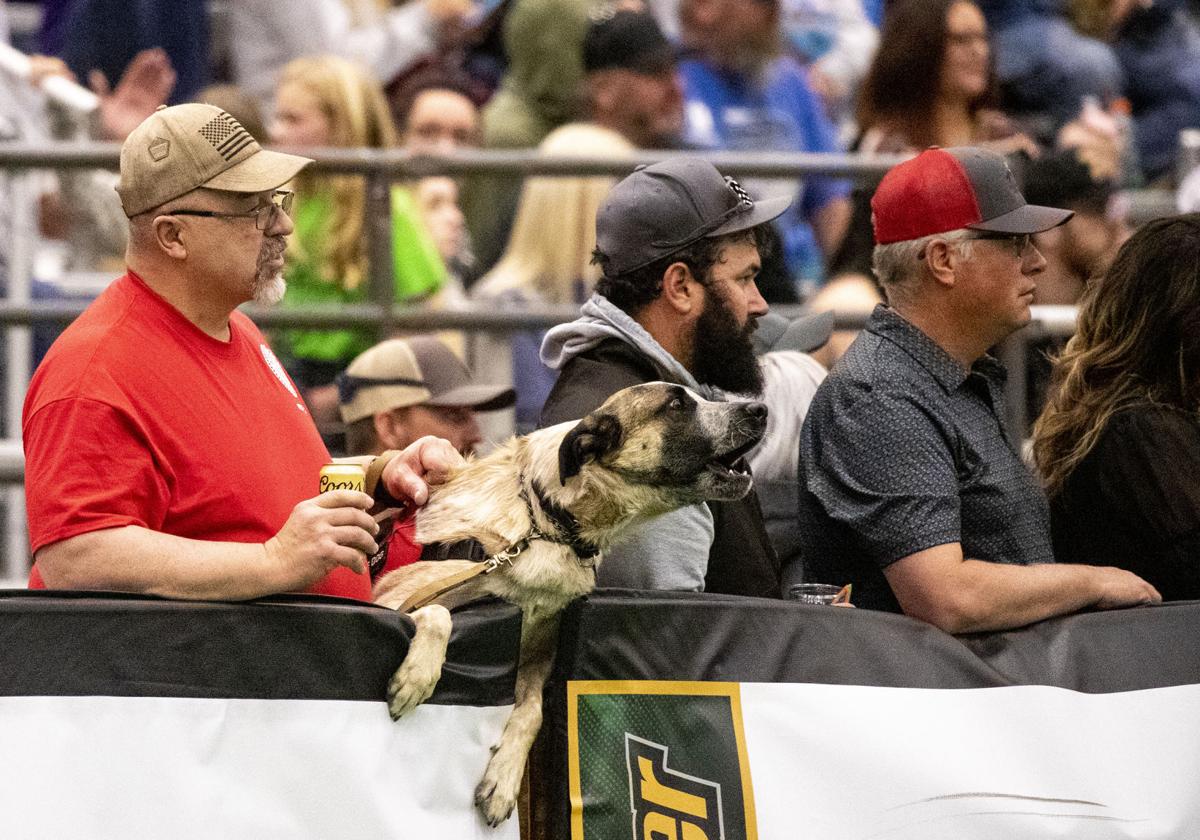 Even a dog got to cheer on the Mustangs from the edge of the field as the team played host to the Salina Liberty Saturday night. 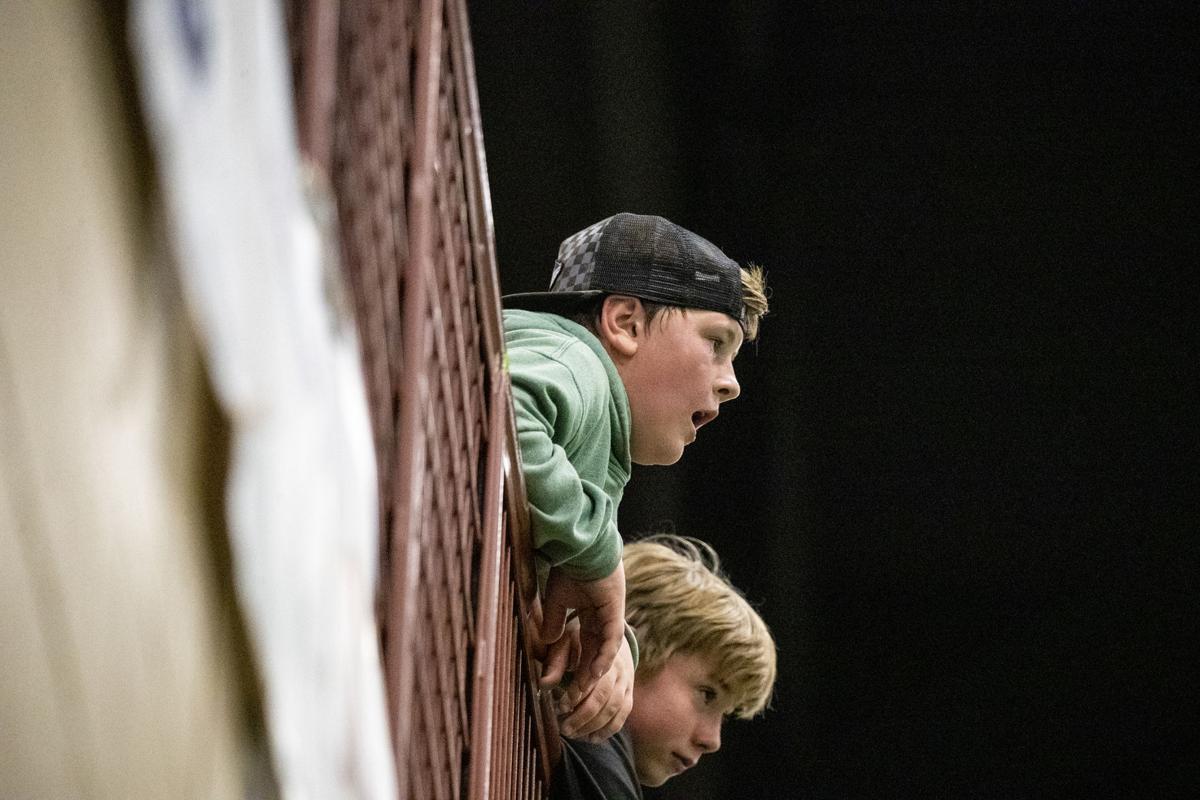 Kids cheer on the Mustangs from the mezzanine Saturday night during a game against the Salina Liberty.

Fans celebrate after the Wyoming Mustangs complete a big pass near the end zone Saturday as they took on the Salina Liberty at Cam-plex.

Fans call for an incomplete pass Saturday evening as the Mustangs played the Salina Liberty at home.

Even a dog got to cheer on the Mustangs from the edge of the field as the team played host to the Salina Liberty Saturday night.

Kids cheer on the Mustangs from the mezzanine Saturday night during a game against the Salina Liberty.

While the Wyoming Mustangs’ record may not be perfect, the timing of the franchise’s inception has been.

Through its first four games of existence, the new profession indoor football team has sold 14,356 tickets, said owner Keith Russ. The Mustangs, who are playing their inaugural season as an expansion team in the Champions Indoor Football League (CIF), have given Gillette fans exactly what they’ve been craving for more than a year since the start of the COVID-19 pandemic.

Attending the games provides a sense of normalcy.

“It’s something to do,” said fan Jennifer Liston. “We needed something like this.”

Liston, like many other Gillette residents, has been to all four Mustangs home games so far. Her favorite part of indoor football has been how personal the experience is.

“You’re right there. You’re right in front of the action,” Liston said. “You’re not in a big stadium like in the NFL or college. We’ve just never had something like this before.”

Scot Allerdings sees the team’s impact on the crowd like no one else in the Wyoming Center at Cam-plex. A physical education teacher at Thunder Basin High School by day, Allerdings is a performer during breaks in action.

“I think it’s just good to bring Gillette back together again,” Allerdings said. “With everything how it’s been and everything being shut down, people are just ready to get out and be a part of the community and be involved.

“They just want to be back out and get back to normal.”

While sports fans in Gillette have grown accustomed to seeing a lot of winning through Campbell County High School and the newly established TBHS, wins and losses aren’t the main draw for a team like the Mustangs. The fast-paced game of arena football is as much a show than it is a game, Allerdings said.

Brad Gregorich was able to enjoy his first Mustangs game this past weekend when the team hosted the Kansas-based Salina Liberty. But Gregorich didn’t go to the game alone.

As the principal of Hillcrest Elementary School, Gregorich was a chaperone for 30 students who were able to attend the game this weekend. The team gave the school 30 free tickets, he said.

“I think after the last year we’ve had people who are real excited to experience something like this,” Gregorich said. “It’s just a really fun environment. ... It’s an exciting product.”

While Gregorich enjoyed the show this weekend, he said it was a memory the kids will hold onto for a very long time.

“They loved it,” Gregorich said. “It was a pretty unique experience for a lot of them. Even if they’ve been to a lot of different sporting events, they’ve never been to something quite like this.”

The primary focus for the Mustangs players is always winning. But players like star running back Jeff Carr won’t hesitate to give out high-fives or sign some autographs when there’s time to spare.

“The fans always make it more fun. We don’t want to come play in front of nobody,” Carr said. “I’ve never did this before, but even when we lost today they’re happy, so it’s just a great fan base.”

The Mustangs lost to Salina 63-32 to drop to 2-2 overall and 0-2 in CIF league games. The team will now travel for the first time this season to play the Dodge City Law in Kansas at 7 p.m. Saturday.

The Mustangs next home game will come after a bye the following week. Wyoming will host the Omaha Beef at 7 p.m. May 8.

Mustangs tickets can be bought at wyomingmustangsfootball.com or at the Cam-plex ticket office and at cam-plex.com.

The Wyoming Mustangs lost its second league game of the season to the Salina Liberty (Kansas) 63-32 in the Wyoming Center at Cam-plex Saturday night.

The Mustangs struggled on both sides of the ball throughout the entire game. Salina got off to an early lead and Wyoming was never able to climb itself back into the contest.

The Mustangs started the game with the ball but quickly turned the ball over on downs as they were unable to get a first down in its first four plays. The turnover gave Salina favorable field possession for its first offensive possession which they quickly converted into points on a 6-yard touchdown run.

After a made extra point, Salina was up 7-0 less than five minutes into the game.

Wyoming continued to struggle to move the ball, turning the ball over on downs for a second straight drive on the ensuing possession. Salina capitalized on the Mustangs' stalled drive with points, making the score 14-0 on a 14-yard touchdown run with less than six minutes left in the first quarter.

On the team's third offensive drive, the Mustangs again turned the ball right back over to Salina. Quarterback Faustino Saucedo threw an interception in the endzone just seconds into the second quarter.

The Liberty took advantage again with a 17-yard touchdown pass and a made extra point to take a 21-0 lead with 9:47 left in the first half.

After the interception, Sauedo was replaced by quarterback David Perkins for the Mustangs. Perkins didn't fare much better on his first drive, throwing another interception in the endzone to leave the Mustangs with a second straight turnover in the redzone.

Less than a minute later, Salina connected on a 34-yard touchdown pass to go up 28-0 with four minutes left in the second quarter.

Perkins was able to settle in for his second drive at quarterback, finding wide receiver Garry Brown III on the first play of the drive for a 40-yard touchdown strike to put the Mustangs on the board. Running back Jeff Carr capped the drive with a successful two-point conversion to make the score 28-8.

The momentum didn't last long for the Mustangs as Salina continued to poke holes in Wyoming's defense. After receiving the kickoff, the Liberty scored again on its first play of the ensuing drive on a 25-yard touchdown pass.

The controversial play drew a lot of boos from the crowd as Salina's wide receiver was lifted over the wall on the side of the endzone, but after another made extra point, the Liberty were up 35-8 with less than three minutes left in the first half.

The next drive, Perkins threw his second interception of the game, again in the endzone, to give Salina possession right back. After a big penalty call on the Mustangs' defense, Salina had the ball at Wyoming's 5-yard line for one last play with one second left in the half.

As time expired, Salina's quarterback connected with his wide receiver for a 5-yard touchdown pass to give the Liberty a 42-8 lead going into the locker room at halftime.

Salina started the second half with the ball. For the first time in the game, the Mustang defense was able to force a turnover on downs.

Perkins capitalized with a 1-yard touchdown run with 6:35 left in the third quarter but the Mustangs failed the two-point conversion to keep the score at 42-14.

Salina responded right back with a 1-yard touchdown run of its own four minutes later. After missing the extra point, the Liberty held a 49-14 lead at the end of the third quarter.

Wyoming's offense started to come alive in the second half but it was too little too late to overcome the team's large deficit. Perkins connected with wide receiver Alex Noble for a 30-yard touchdown pass but failed the two-point conversion to bring the score to 49-20 with 14:07 left in the game.

But Salina's offense again answered back immediately with a 35-yard touchdown pass and a successful extra point to go up 56-20.

Perkins found Brown in the endzone for the second time on a 13-yard touchdown pass two minutes later to make the score 56-26 after a failed two-point conversion. Salina got the points right back with a 2-yard rushing touchdown and a made extra point to increase the Liberty's lead to 63-26 with four minutes left in the game.

The Mustangs would score the last points of the contest on a 5-yard Perkins touchdown run, but a failed two-point conversion kept the score at 63-32. After receiving the kickoff, all the Liberty had to do was take a knee and run the clock out to seal the team's first ever win over the Mustangs.