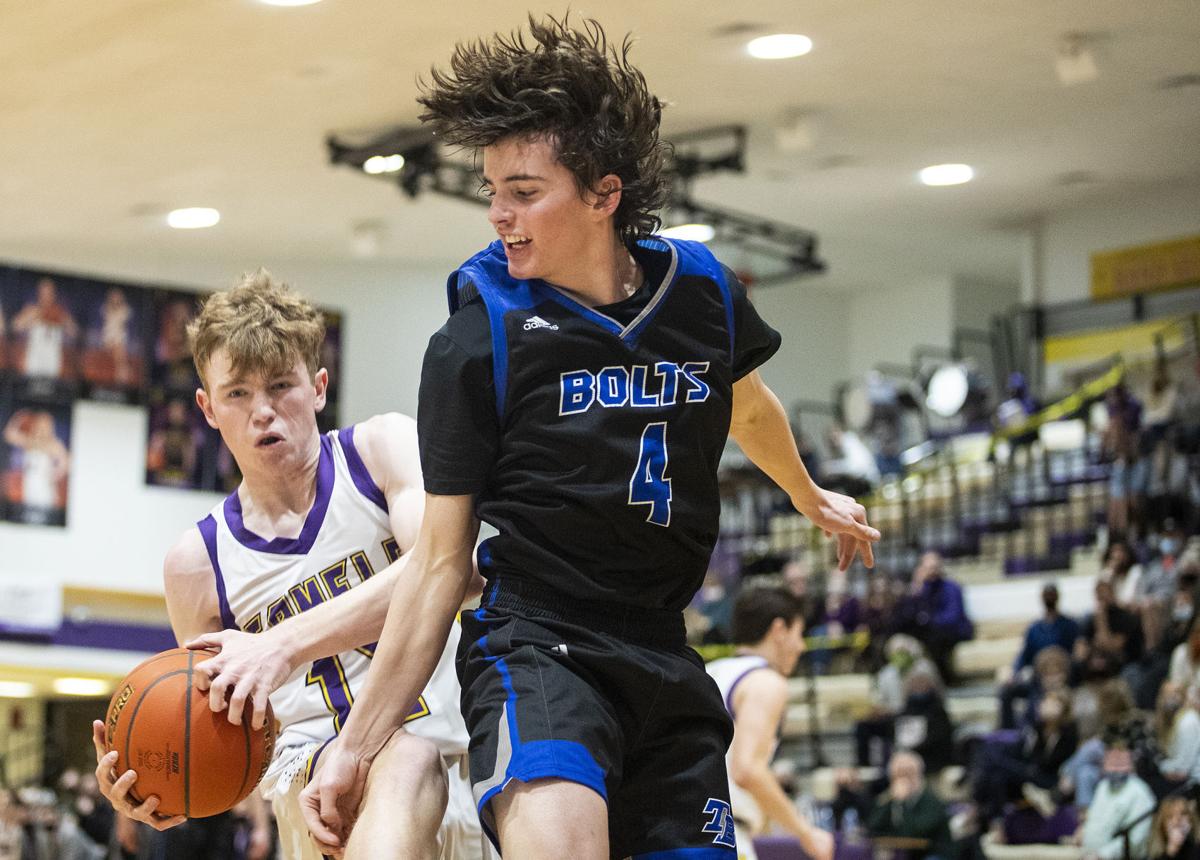 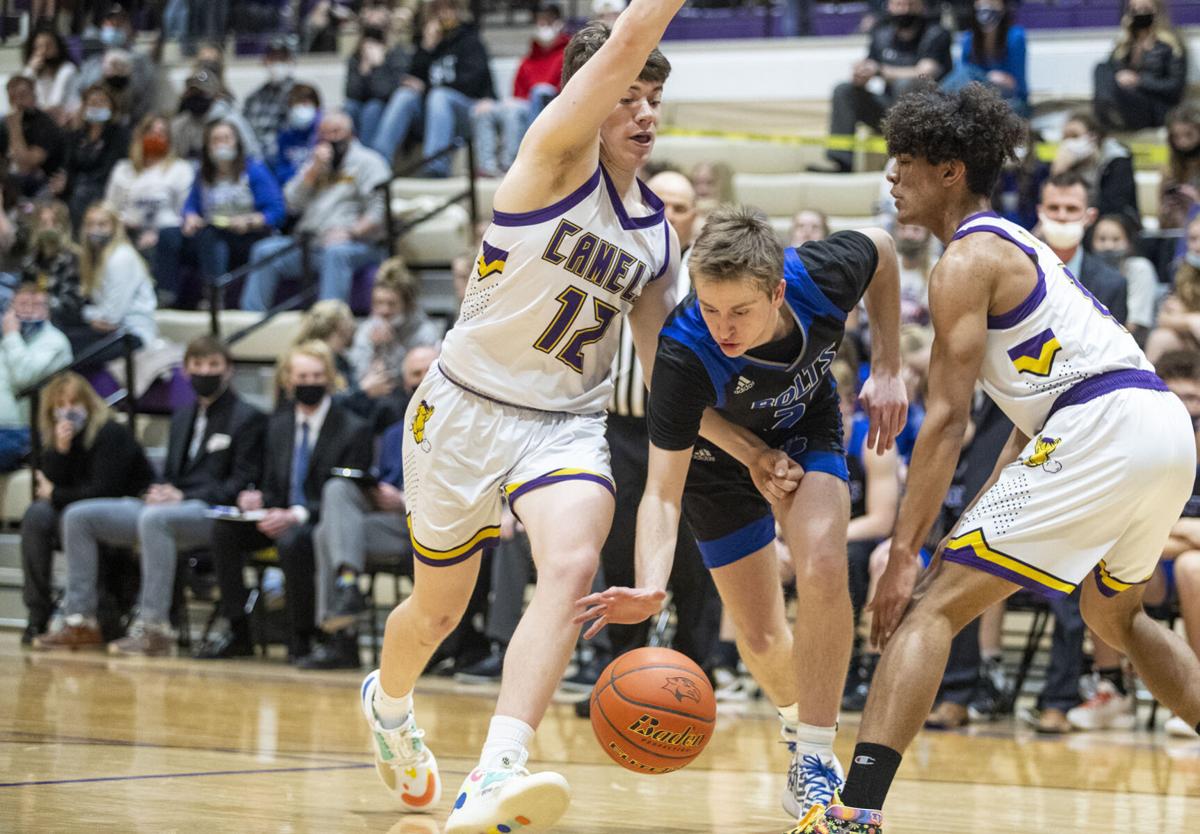 It is what it is.

Both Gillette boys basketball coaches — Bubba Hladky at Campbell County High School and Rory Williams at Thunder Basin — repeated the sentiment about the new state regional tournament format. Under the new format, the Bolts and Camels play each other in the first round of the regional tournament in a win-or-go-home game.

The top-5 teams in the WyoPrep.com coaches and media boys basketball rankings are from the East side of the state in Class 4A. Three of the five ranked teams are in the Northeast Quadrant, including Sheridan (No. 1), Thunder Basin (No. 4) and Campbell County (No. 5).

With the Broncs (14-2) locking up the No. 1 seed for regionals to play No. 4 seed Kelly Walsh (2-14), that leaves the Bolts and Camels as the Nos. 2 and 3 seeds to face off in the first round. The winner clinches a trip to state, and the loser goes home.

What that means is this year’s regional makeup guarantees that one of the state’s top 5 teams won’t make it to the state tournament.

“It is what it is, unfortunately,” Williams said. “It’s pretty similar to what volleyball did in the fall. I understand all the health concerns and keeping everybody safe, but the tough part of it is that you’re going to have some good teams that don’t make it.”

During volleyball season, Thunder Basin eliminated Campbell County in the first round of the regional tournament in four sets to clinch a spot in the state tournament.

The basketball teams split the season series 1-1 this year, with Campbell County beating Thunder Basin 68-57 Thursday night and the Bolts taking down the Camels 67-58 last month.

While the Bolts program is only in its fourth year of existence, the Camels have a 33-year streak of making the state tournament going back to 1987, according to WyoPrep.com. The last time Campbell County wasn’t in the state tournament, President Ronald Reagan was in office.

“I like the pressure,” TBHS senior Andre Felton said. “The cross-town rivalry has always been a big deal to me and I like that we get to play them to go to state. The emotions are definitely high.”

Williams compared the situation to a college team going into March Madness.

“Nobody is going to feel sorry for anybody. You’ve got to prepare for one game and hope to get it done.”

In past years, the regional tournament would include eight teams from the East side of the state in a double elimination format. Because of COVID-19, activities directors across the state voted for a new condensed regional format to limit regionals to four teams at each location, with only the top-2 teams surviving the quadrant.

Unfortunately for Campbell County or Thunder Basin, one of the Gillette squads will be the odd team out this year.

“It’s win or go home,” Hladky said. “It’s just the way it is this year. … There’s nothing we can do to control that. We just have to show up there and play.”

Top teams in the state

“It is kind of funny that’s it’s the two Gillette teams that play against each other for the spot,” CCHS senior Tanner Lemm said. “I think we could play just about anyone, though. Fear no one and respect everyone, and I think it will be a good game for sure and we’re ready to go get ’em.”

During Thursday night’s contest at CCHS, Hladky scored 23 points for the Camels while Williams put up 22 for Thunder Basin.

Gillette has been a perennial powerhouse in basketball. Campbell County has won 14 state championships since 1990.

But the opening of Thunder Basin High School in 2017 has put some pressure on the program as the basketball talent begins to even out between the two Gillette schools.

“One play-in game, so let’s throw it up and see what happens.”

It’s not much of an advantage to play a team you’re so familiar with, Hladky said. While the Camels know Thunder Basin’s strengths and weaknesses, the same is true for the Bolts.

“There’s not going to be a ton of secrets going on. We’re just going to go out and play basketball.”

Thunder Basin and Campbell County play at 4 p.m. Thursday at Thunder Basin High School. The winner moves on to play the winner of Sheridan vs. Kelly Walsh to determine seeding for the cross-quad regional tournament starting March 4 at Cheyenne South.

“Unfortunately, one of the Gillette teams is not going to be going to state,” Williams said. “There’s a lot of good basketball players and some really good coaches that unfortunately won’t be making that trip to Casper.”

While the game didn't mean much in terms of playoff implications, the game still had a playoff atmosphere and was a back and forth contest up until the final minutes. The Camels took an early 20-13 lead after the first quarter but Thunder Basin tied the game late in the second quarter and eventually gained a 32-21 lead going into halftime.

In the second half, Campbell County regained the lead and went into the final quarter with a 43-41 lead. The Bolts again battled back and tied the game 55-55 with 3:29 left to play, but the Camels were able to ice the game late at the free throw line to give Campbell County the win.

Leading in scoring for Campbell County was Luke Hladky with 23 points, followed by Tanner Lemm with 19, Austin Robertson with 11 and Jefferson Neary and Gabe Gibson with five apiece.

For Thunder Basin, Deegan Williams led the way with 22 points, followed by McKale Holte with 11, Andre Felton with 10 and Ryan Baker with five.

In the second half, Campbell County struggled with turnovers and was outscored 31-23 in the final two quarters to fall to 9-8 on the season. The Bolts (17-1), ranked No. 1 in the WyoPrep.com coaches and media girls basketball rankings, grew its win streak to 16 games.

Both teams struggled shooting the ball Thursday night, with the Bolts going 18-51 (35%) from the field while the Camels shot 15-46 (32%). Campbell County out-rebounded the Bolts 39-30 but turned the ball over a total of 30 times compared to just 16 by Thunder Basin.

Leading in scoring for Thunder Basin was Sydney Solem with 14 points, followed by Gabby Drube with nine and Joelie Spelts and Kate Hladky with seven apiece. For Campbell County, Maddie Jacobson led the way with 11 points, followed by Zoey Zimmerman with six and Liv Castellanos, Millie Riss and Halle Hladky all with five.

Next for both teams will be the first round of the Northeast Quadrant Regional Tournament Thursday afternoon at Campbell County. Both the Camels and the Bolts can clinch a spot in the state tournament with a win, but a loss will end the team's season.