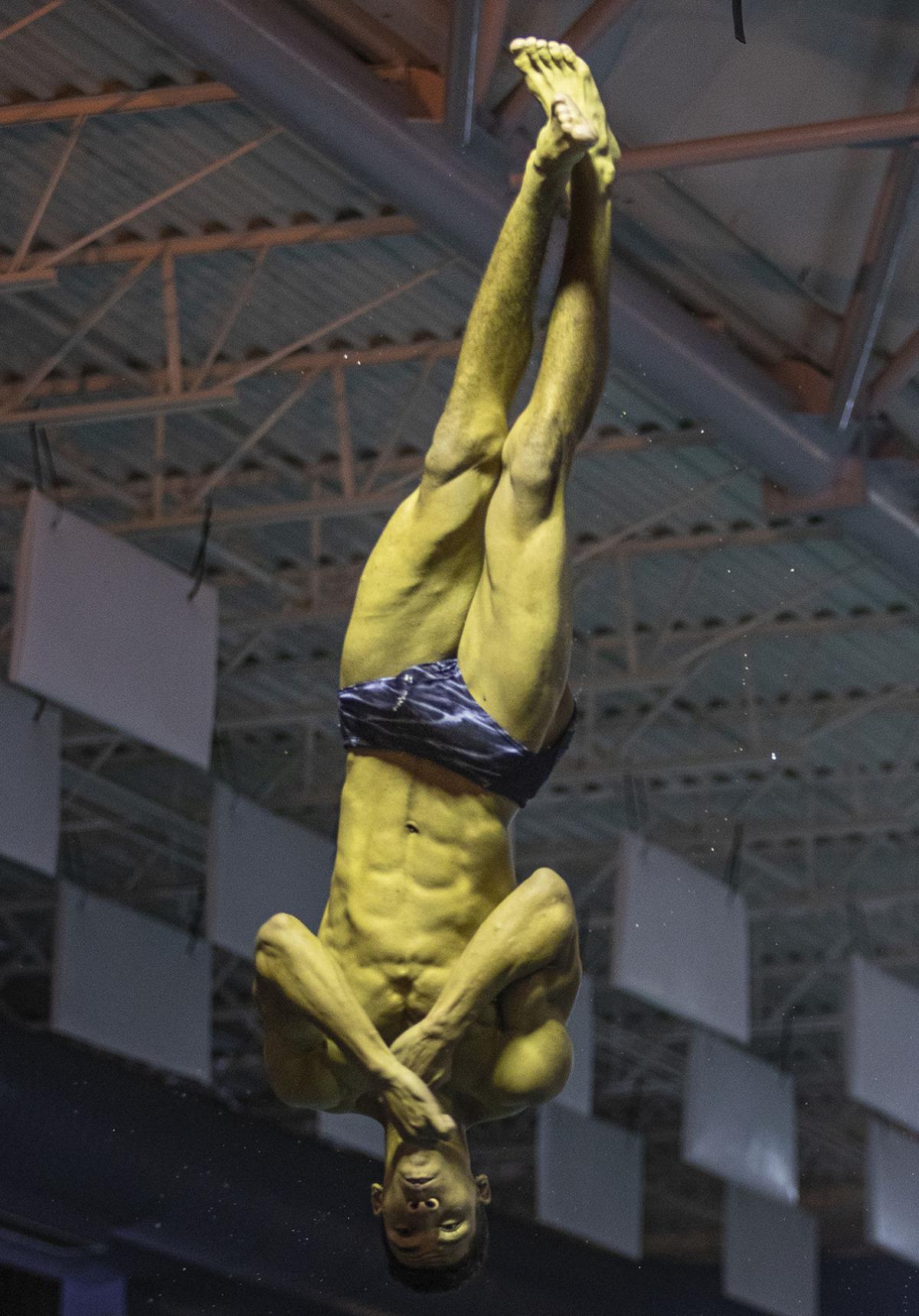 Thunder Basin’s Isaiah Haliburton soars through the air in the 1-meter diving at the Campbell County Aquatic Center earlier this season. 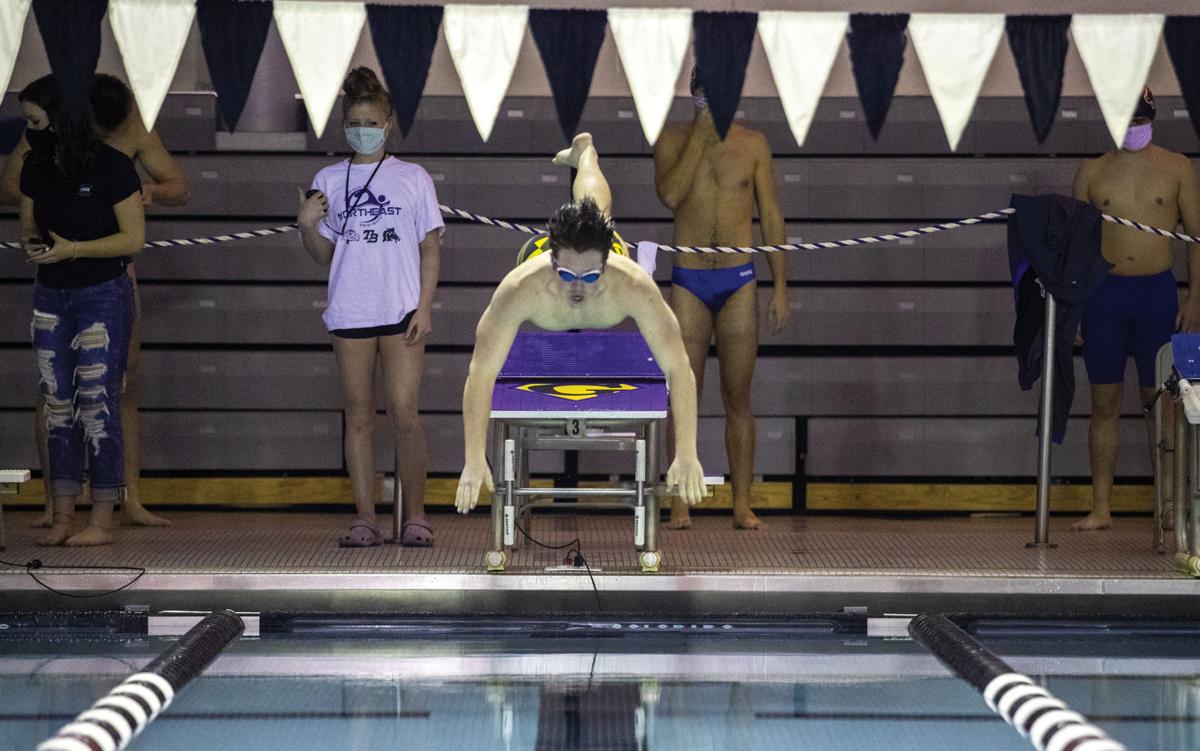 Caleb Carsrud of Thunder Basin High School enters the water for the 50-yard butterfly at the Campbell County Aquatic Center earlier this season.

Thunder Basin’s Isaiah Haliburton soars through the air in the 1-meter diving at the Campbell County Aquatic Center earlier this season.

Caleb Carsrud of Thunder Basin High School enters the water for the 50-yard butterfly at the Campbell County Aquatic Center earlier this season.

For a brief moment, Caleb Carsrud and Isaiah Haliburton were disappointed with how their swim seasons ended at Thunder Basin High School.

Carsrud, a senior, and Haliburton, a junior, both placed second in an individual event at the Class 4A Wyoming Boys State Swimming and Diving Championships last weekend in Laramie. While both went in with aspirations of wining state titles, the second place finishes earned them all-state honors.

Athletes who finish first or second in their individual events are named all-state, according to WyoPrep.com.

In his three seasons on the Bolts diving team, Haliburton has earned all-state honors every year. After winning the 1-meter diving event last year as a sophomore, Haliburton was second this season with a final score of 467.65 through 11 dives.

Laramie’s Dylan Bressler won the title this year by breaking the state meet record with a final score of 515.35.

“He’s working hard and I think he definitely deserved it,” Haliburton said. “I think a lot of it is the pressure. There’s a lot riding on state and I didn’t perform as well as I think I should have, but there’s always next year so I’m looking forward to that.”

Before the state meet, Haliburton set a record of his own, breaking the conference meet diving mark with a score of 484.95. The score also broke his own school record, said TBHS coach Jade Moser.

While Haliburton didn’t repeat as state champion in diving, he’s still proud of what he accomplished this season.

“It’s certainly very uplifting,” Haliburton said about being named all-state. “It’s such a great title to have. State didn’t really go as planned, but being named as one of the best divers in the state is still a great accomplishment.”

With one year left at Thunder Basin, Haliburton knows his already special career is far from over. Four years and four all-state selections sounds like a solid goal for next season, he said.

“Keep it coming, you know?” Haliburton said. “I have three already, so you might as well shoot for four. That’s the plan there.”

Going out on top

Rather than blaming himself for a second place finish, Carsrud tips his hat to Kelly Walsh’s Carter Mahoney, who beat him by less than a second.

“It was a great experience that really got to test what I was made of,” Carsrud said. “It was disappointing because I feel like I could have done better and I wanted to do better, but I had some of my best races and some of my best times, so overall I was pretty happy with it.

“I was really honored to be able to be there with all of those guys.”

Looking back to his freshman year, Carsrud is proud of the progress he made in the pool in his four seasons as a Bolt. That’s what makes being named all-state mean more, he said.

“A couple years ago I never really thought I would ever really get to this point, so that’s awesome and it’s a great honor to be on there,” Carsrud said. “There’s a lot of great athletes on there and it feels good to be named as one of them.”

Finishing up his final year as a Bolt, Carsrud said he’s happy to end his high school swimming career with the all-state selection.

“I get to go out just knowing that I accomplished something that not a lot of people get to accomplish,” Carsrud said. “It’s just nice to know that’s how I ended.”

With the boys swimming and diving season behind them, both athletes are thankful they were able to compete while other states have kept high school sports on hold.

“Looking at how bad (COVID-19) was and not knowing much about how things would go, it was just amazing to be able to have a season this year,” Haliburton said. “I’m just so grateful that we were able to follow through with it.

“Sure, we had some restrictions, but in the end it was still a blast and I had fun and I enjoyed it.”

Sani Carsrud, a junior at the University of Wyoming and the older brother of Thunder Basin's Caleb Carsrud, earned all-conference recognition for the Mountain West Conference on the girls swim team.